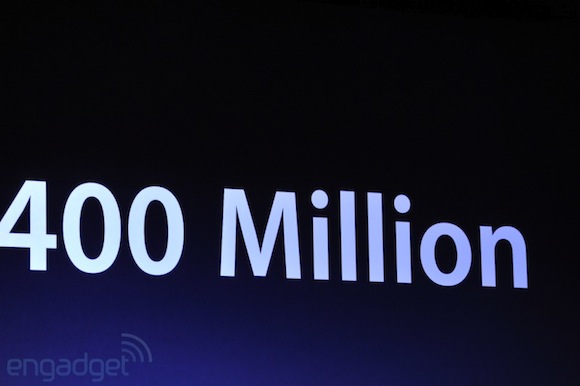 Looking back at it, there was no shortage of announcements during Apple’s WWDC keynote on Monday. An all-new MacBook model, major updates to its desktop and mobile operating systems, and a new Maps app — not bad for an afternoon.

But amongst all of the oohs and ahhs of the new products and updates, there was one particular announcement that sort of flew under the radar. According to Apple, it now has more than 400 million active credit card-linked iTunes accounts…

At first glance, this may not seem like a very big deal. But let’s put this into some context. Paypal, arguably the most well-known digital payment provider, had somewhere in the neighborhood of 250 million accounts as of 2011. And only around 100 million of those were active.

This means that Apple, for the sake of this argument, has roughly 4x the reach of the current leader in digital payments. That, my friends, is a pretty big deal. Especially when you consider all of the recent talk that the company is looking to enter the still-up-for-grabs mobile payment space. But why haven’t we seen anything materialize yet?

The truth is, creating a universal wireless payment platform is a lot tougher than it sounds. Even for a company as big as Apple. Just ask Google. The search giant announced its NFC-flavored Wallet service 12 months ago, and it still seems like little more than a pipe dream. Even large companies like Visa, who do this kind of thing for a living, are having trouble getting both consumers and businesses on the same page (see payWave).

But from the outside, it seems like the key to a successful mobile payment platform can be broken down into a 3-part equation. First, you have to build a large user-base — the bigger the better — and convince them all to give you their credit card information so you have a way to bill the payments. Second, you need to get businesses on board. Once again, the more the better. The more businesses you have using your service, the more customers you will attract, and vice versa. And finally, you have to find a seamless way to connect the two. Be it NFC, Bluetooth 4.0, whatever.

Now, Apple is already off to a good start with the first part of the equation. The aforementioned 400 million iTunes accounts would definitely serve as a nice opening user-base. And that number will undoubtedly grow substantially over the next 5 years.

As for the second part, Apple may have just taken care of it with the new Passbook application. The program is essentially a virtual “pocket” of sorts, allowing users to digitally store gift cards and event tickets. But more importantly, the app’s API is open to the public. And Apple is already encouraging businesses to integrate their services with it. Obviously, the more companies that participate, the more useful it becomes.

That just leaves the third part of the equation, the seamless connection, which Apple has yet to make a move on. We’ve heard rumors and speculation regarding both NFC and Bluetooth 4.0, but nothing in the form of concrete evidence. Personally, I’d like to see them partner up with a company like Square, and use their geolocation-based technology. But that’s just me. It’ll be interesting to see how Apple plays this one.

The bottom line here is that Tim Cook and company appear to be quietly moving some major pieces into place to eventually make a move into the mobile payment space. And that’s probably a good thing. Think of it this way: have you ever used the Easy Pay service in the Apple Store app and thought, “wow, I wish it was this easy to shop everywhere?” Well, maybe soon, it will be.