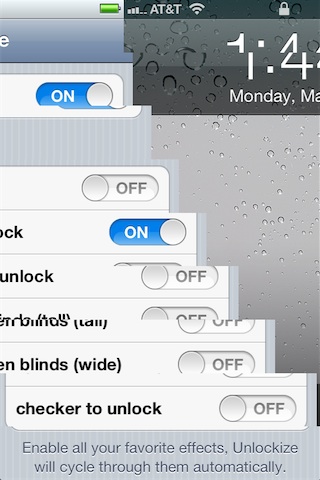 Unlockize is the latest jailbreak tweak to harness key aspects from Kudin’s concept, but it doesn’t just stop there. Unlike the previously released Unfold, Unlockize features five additional lock screen animations, and they’re all very unique. Extra animations do come at a cost, however. Is Unlockize worth its $1.99 asking price?

The answer to that question is yes. If you’re at all into customizing the look and feel of your iPhone’s Lock screen, then Unlockize is absolutely worth the $1.99. It’s a very well thought out tweak, it plays nice with other tweaks, and it features a variety of high quality animations with the prospect for many more.

One thing that I especially like about Unlockize is the fact that you can enable multiple animations, and it will automatically cycle through each one as you lock and unlock your device. If you’re not someone who needs all of the extra animations and just want the “fold to unlock” animation, then the aforementioned Unfold is a tweak you should probably pay attention to. Not only is it focused on that singular animation, but it’s also free of charge.

If, though, you think you’d prefer the full suite of animations, head over to Cydia’s BigBoss repo where you can download Unlockize today. I don’t think you’ll regret your purchase. Let me know what you think about it in the comments section.