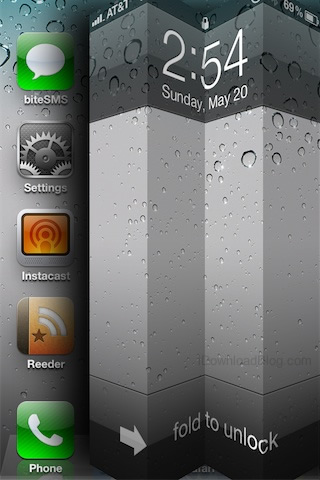 A few days ago, Russian freelance designer, Anton Kudin, created a new “fold to unlock” concept for the iPhone. Needless to say, his concept turned out to be a pretty big hit.

Unsurprisingly, given the history of the jailbreak community’s fast turnaround time, Kudin’s concept has been turned into a reality.

This afternoon I had the privilege to sit down and test out an unreleased version of Unfold, a new jailbreak tweak from German jailbreak developer Jonas Gessner. Unfold, as you might have guessed, is a usable implementation of the fold to unlock concept.

Want to see Unfold in action? Then step right inside…

Once installed, Unfold simply works. It doesn’t require any settings configuration, and it plays nice with iOS’ passcode security feature. Unfold is a solid implementation of an interesting concept, and it’s sure to make anyone unfamiliar with jailbreaking do a double take.

As stated, Unfold is still in development, but it’s slated to be released in the very near future for free on Cydia’s BigBoss repo.