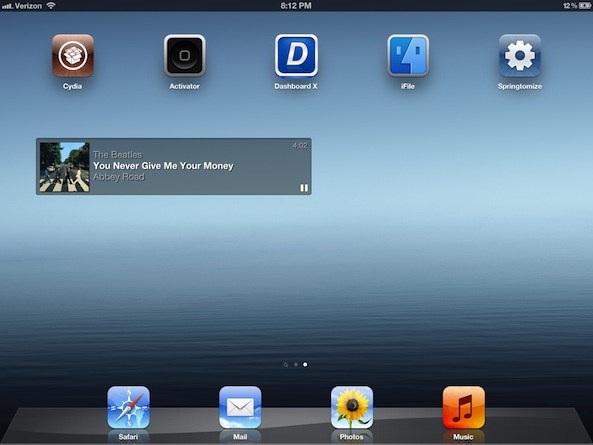 The initial release of Jukebox will only feature integration with the stock Music app, but the developer is hard at work at making it play nice with 3rd party music apps like Spotify and Pandora. Besides this one obvious shortcoming, Jukebox is shaping up to be a top tier Notification Center widget, and by far the best Dashboard X widget yet…

In its compressed mode, Jukebox takes up very little real estate, though a simple tap on the widget yields a set of buttons to control your music. Swiping on the container housing the album art allows you to switch between tracks, and tapping and holding on the same pane will invoke the fulll Music app itself.

Even though it’s still in its early stages, I’m really impressed with Jukebox. It appears to be solely designed with Notification Center in mind, but you’ll quickly realize that it works just as well via Dashboard X. I’m very much looking forward to Jukebox’s initial release on Cydia, and I believe you should be too.

Though I haven’t been privy to an exact time table for release, Jukebox will be featured on Cydia’s ModMyi repo for $0.99 upon release. What do you think about Jukebox from what you’ve seen?