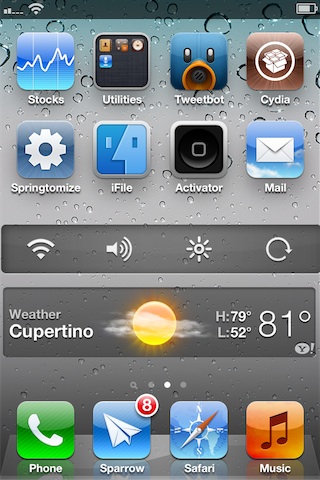 Although I’ve never really understood the excitement behind the widgets, it’s one of those things that my Android toting friends love to brag about.

Both of the above statements are now true, courtesy of a new jailbreak tweak called Dashboard X. Dashboard X is the result of months of hard work by developer, Ori Kadosh. This tweak allows you to take existing widgets created for Notification Center and position them anywhere on your iPhone or iPad Home screen.

The first thing you’ll notice about Dashboard X is how cohesive and well put together the tweak is. The workflow for establishing new widgets on the Home screen is thoughtful and straightforward.

Whereas a lot of tweaks like to make you jump through hoops and learn new processes to perform simple actions, Dashboard X borrows concepts that iOS users are already familiar with.

For example, to initiate the placement of a new widget, simply place the device into wiggle mode by holding down on any app icon, then tap and hold any blank space on the Springboard. Doing so will invoke the Add New Widget dialogue, which allows you to select from any of the available Notification Center widgets already installed on your device. 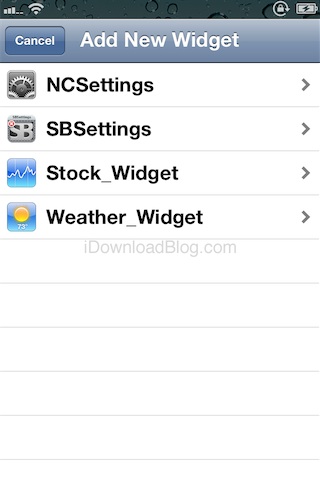 The next screen allows you to tweak specific settings for an individual widget. You’ll find a settings for Interaction and Auto Center (iPhone or iPod touch only). If you disable Interaction, you will not be able to interact with your widget, and instead it will act as if it’s a part of your Home screen wallpaper.

Adding a widget to your Home screen involves dragging the widget around just as if it were an app icon. Once you’ve determined an ideal spot for your widget, press the Home button to exit wiggle mode and your changes will take place. 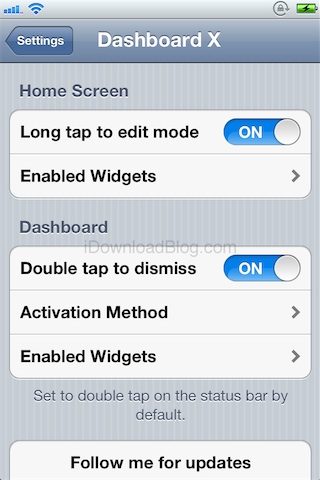 I understand that this is not the first time that widgets have appeared on the iOS Home screen by means of a jailbreak tweak or app, but this is the first time that it really make sense. Because there’s already a fairly large assortment of Notification Center tweaks available on Cydia, there currently exists a huge selection of Widgets to choose from.

While this is definitely the tweak’s main draw, there’s also a Dashboard mode that can be assigned directly to an Activator action. The Dashboard is a standalone screen that appears via a transparant window overlaying your current screen. You can assign widgets directly to the Dashboard just as you can with the Home screen. Although Dashboard X takes its namesake from this portion of the tweak, it’s more of an afterthought when compared to the ability to add widgets directly to your Home screen. Besides, Notification Center already does a good job as a “dashboard” if that’s the sort of functionality that you’re after. 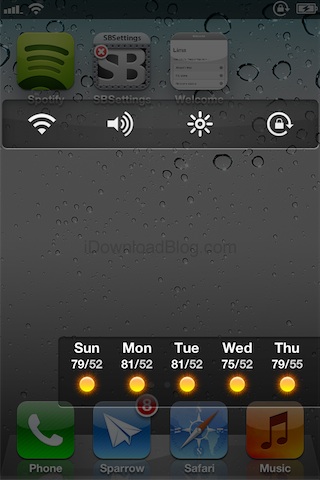 Dashboard X works for all jailbroken iOS 5 devices, and will be available soon on Cydia’s ModMyi repo for $1.99.

I have high hopes for Dashboard X, because not only is it promising in its current form, it should also promote the development of more engaging and useful widgets. Even if you’re not a fan of widgets on the Home screen, Notification Center users may yield benefits as a result.

Do you believe that Dashboard X looks compelling enough to warrant its asking price?