Piper Jaffray’s resident Apple analyst Gene Munster is certainly the biggest proponent of a full-blown Apple television set and I guess you could say he’s actually started the whole craze in the first place.

It’s been a while since we last heard from him, but now Munster’s back with some updates to both iTV and iPhone 5 memes.

He sees an Apple-branded television debuting in December of this year and hitting store shelves in 2013 (hopefully, it won’t be a “terrible use of retail space”).

As for a sixth-generation iPhone, or the iPhone 5 as the press dubbed it, he agrees on the general consensus of an October timeframe, which also jives well with what iMore recently heard from sources, too…

Bear in mind Apple’s always been able to sell its products at a “considerable premium”.

And with the television space being the cut-throat biz it is, no wonder Samsung and Sony both plan to set price minimums on their televisions, an attempt to put a stop to the falling prices and protect their slim profit margins.

The analyst also reiterated that the iPhone 5 will be the “biggest consumer product launch this year” and drive the biggest device upgrade cycle, believing there is an 80 percent chance of Apple selling 49 million iPhone 5 units this year.

As for other products, Munster wrote in the note:

We believe Apple’s product roadmap for the remainder for the year will include meaningful updates to core product lines including the iPhone and Mac.

Speaking of big words, Eric Jackson, the founder and managing member of Ironfire Capital, recently opined that the iTV launch will be “a big seismic shift” in the world of television.

And if you ask Forrester Research’s James McQuivey, the iTV is going to be a non-TV TV you didn’t even know you needed.

Specifically, McQuivey envisions a light and beautiful 32-inch display that can be hung on any wall (especially if you’re Steve Ballmer) to become an iHub, much in the way Apple positioned the Mac as a hub for our digital lifestyle in the early-90s. 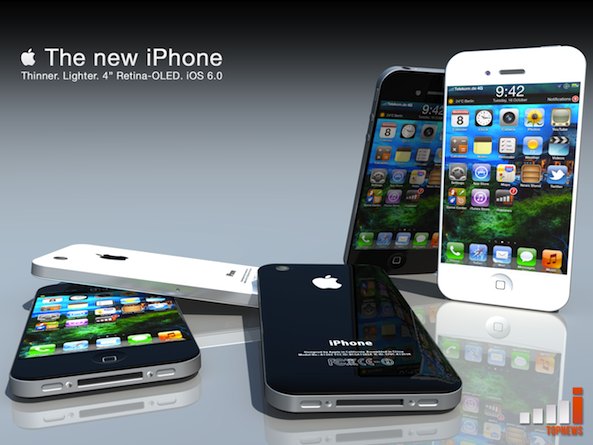 Last we heard about iPhone 5 was this leaked front panel part seemingly corroborating the taller display rumor mainstreamed by The Wall Street Journal and corroborated by the well-informed 9to5Mac.

Munster bets on Apple’s leadership status allowing the company to secure enough chips, “even if it comes at the expense of other companies”, a notion he shared before.

Peering into his crystal ball, the outspoken analyst saw Apple of California selling a cool 176 million iPads out of a total of 301 million tablets by 2015.

As for tablets overtaking PCs, it’s going to happen “before 2020”.

That the iPhone 5 will land in October is a foregone conclusion at this point, but I wouldn’t bet on the iTV happening this year.

Do these dates make any sense to you?