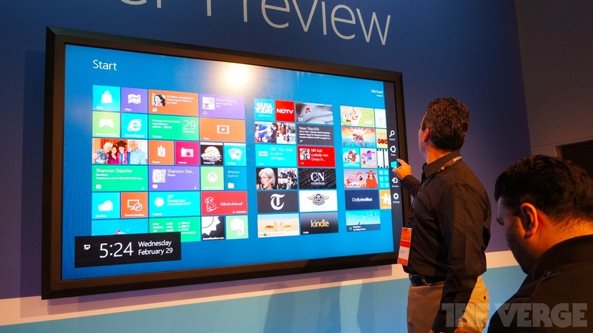 Seriously, Microsoft has plans to officially sell a whopping 80-inch tablet, their VP has confirmed. This beast of a ‘tablet’ is powered by Microsoft’s upcoming Windows 8 operating system and is currently hung on the wall in CEO Steve Ballmer’s office.

It’s apparently become Ballmer’s whiteboard, email and phone replacement and the company plans to market it for office use initially. No word on pricing or availability yet.

I’d sure love to have such a Minority Report-style display adorn my office walls. The closes thing to this outrageous display in the Apple world? That non-TV TV from Apple that Forrester dreamed up yesterday…

This is not a joke.

Steve Ballmer has an 80-inch Windows 8 tablet in his office. He’s got rid of his phone, he’s got rid of his note paper. It’s touch-enabled and it’s hung on his wall.  It’s his whiteboard, his email machine and it’s a device we’re going to sell.

It’s not a consumer thing now, but we know historically that that’s how all things start. The idea that there should be a screen that’s not a computer, we’ll laugh at that in two years.

The device showcases the ability of Windows 8 to scale from the smallest smartphone and tablet screens to screens of 80 inches and beyond.

The company demoed Windows 8 Consumer Preview on this very display in February.

As much as Apple has mainstreamed multi-touch user interfaces on small-screen mobile devices, Redmond has done the same for jumbo-sized display with their Surface technology.

Having had a chance to play with Surface 2.0 extensively, I walked away very impressed, even if the system lacks the polish and smoothness of iOS.

They’re still far from cropping up everywhere, but the technology does have tremendous potential.

Now, combine Surface and Windows 8 into a single product and price it within average small businesses’ reach and presto – you have a winner.

These things are bound to take over whiteboards in offices.

I can certainly see huge wall-mounted displays powered by Windows 8 software used extensively in a lot of places, from banks and conference rooms to trade shows, retail stores and other high-trafficked points of sale.

Wouldn’t you want to hang this thing up on your wall?