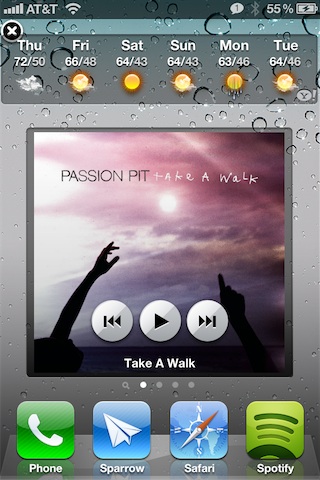 One of the wonderful things about the Dashboard X widget interface is its out of the box compatibility with Notification Center add-ons. Cjori — the developer of the popular widget interface — could have easily used that as an excuse to not design widgets exclusively made with Dashboard X in mind, but as a benefit to us, he and others have decided not to do so.

As a result, we have exclusively designed items like Dashtweet, Clock Widget, and now Music Widget — a widget designed specifically for showcasing now playing music on the iOS Home screen.

The only controls you’ll find with Music Widget are previous, play/pause, and skip. Tapping the album artwork will hide or reveal the buttons and track names. Music Widget is no where near the deep experience you’d derive from something like Music Controls Pro, but if it’s simplicity you’re after, it’s hard to go wrong here.

Music Widget is still in beta testing, but as you can see from the video, it can make a solid addition to an iPhone or iPad’s Home screen. Music Widget forgoes complexities for an extremely simple and clean interface that’s befitting of iOS.

We’ll be sure to send out an update once Music Widget is released on Cydia. In the meantime, feel free to share your thoughts below.