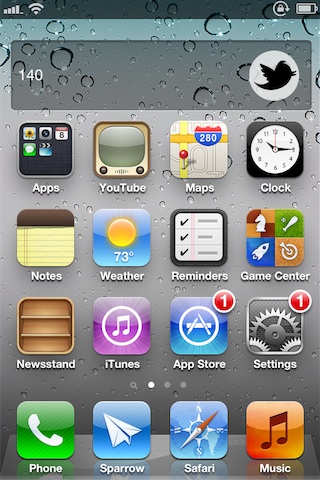 Dashboard X — the new upcoming widgeting system for iOS — has its first official widget in the works, and it’s based on Twitter.

Dashtweet is the name of the new widget, and it allows you to send tweets from anywhere on your Home screen.

This is likely the first of many official widgets designed specifically with Dashboard X in mind. Check out our video coverage of Dashtweet in action…

Dashtweet is a very simple Widget that performs one specific function — it allows you to send a tweet from wherever you decide to place it on your Home screen. The widget uses iOS 5’s built in Twitter authentication to connect to your Twitter account.

As of now the widget is still in development, as is the platform it’s based upon. Even still, we can see the potential that Dashboard X brings to the table.

The developer of Dashtweet has recently updated the widget with the ability to change the color of text, but that’s hopefully the first upgrade in a line of improvements that will make its way to the widget before it hits the public.

Admittedly, Dashtweet isn’t the most exciting prospect that one might imagine, but as stated, this is only the beginning of what will hopefully be a well supported endeavor within the jailbreak community.