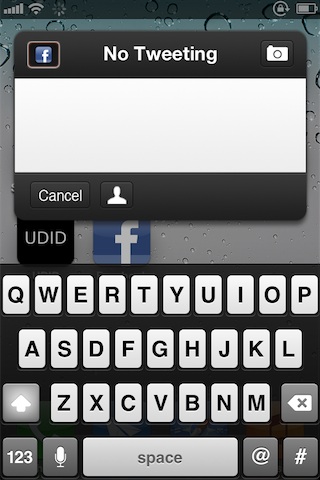 Earlier today I had the opportunity to spend some time with the new Facebook plugin for TwitkaFly — the popular jailbreak tweak available on Cydia.

TwitkaFly is a tweak that allows you to send Twitter updates from anywhere by means of a user-configurable Activator action. It is also one of the most well supported tweaks that I know of, which speaks volumes for moeseth, its developer.

This new plugin will allow you to update your Facebook status, send a tweet, or do both at the same time. If you’d like to see how it works in action, then by all means take a gander…

Once the Facebook plugin is installed, you’ll find a new section in the Settings app for Facebook-Connect authentication. Once you have authenticated to Facebook, you can immediately begin sending out status updates using the familiar TwitkaFly interface.

If you’re a current TwitkaFly user, then you will no doubt be happy with the upcoming plugin once it hits Cydia.

It’s still in development, but I found it to be a solid addition to the already awesome Twitter support.

Let us know what you think about TwitkaFly’s upcoming Facebook capability in the comments below.