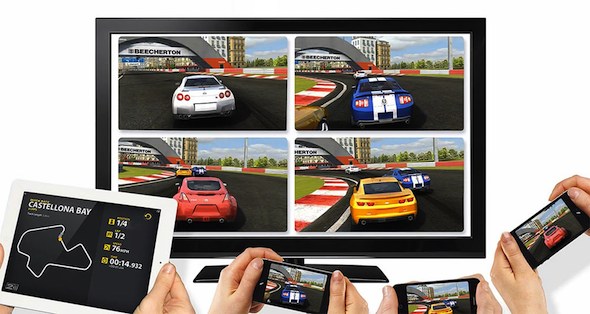 By now, most of you have heard the Apple TV rumors. The iPad-makers are expected to enter the HDTV space at some point in the not-too-distant future with an interactive, high-definition TV set. But it sounds like it could be much more than that.

Cult of Mac is reporting this morning that it has learned that Apple’s television will also come equipped with a Kinect-like video game console, with an interface that relies heavily on motion and touch controls…

“According to sources to Cult of Mac, Apple is working on a television set with an iTunes-integrated touch screen remote and Siri-like voice command technology. The TV set will be coming before the end of 2012. Rumors and patents have said as much for the past year, so that’s nothing new. But that’s not all we’ve heard.

Our sources also say that Apple’s television set will come with an Apple-branded, Kinect-like video game console. The interface will rely heavily on motion and touch controls.”

As crazy as this may sound at first, there’s a stack of evidence that could be used to support the theory. As the site points out, Apple has been in the video game business before with its Pippen console. And there are tons of patents in the company’s name on the topic.

But there’s more. Apple has been hiring a number of executives from the gaming world as of late. Earlier this year it snatched up Xbox LIVE marketing guru Robin Burrowes. And last year it hired a couple of PR men from Nintendo and Activision.

Could this be why Tim Cook was visiting Valve’s headquarters yesterday? Is Apple about to make a huge leap into the console gaming market with its Apple TV set?