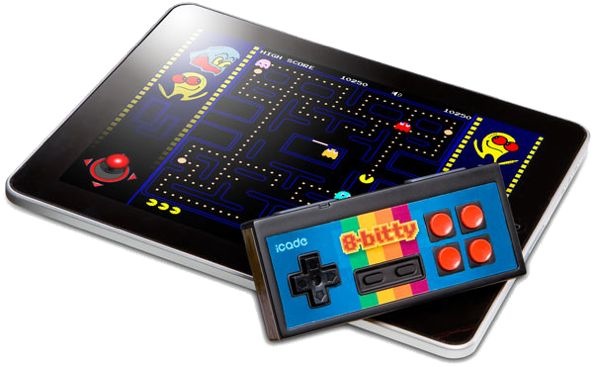 That Apple is toying with a bunch of varied gaming controller concepts is anything but unknown. Two years ago, an interesting Apple patent detailing an accessory for playing games with portable devices surfaced in the United States Patents & Trademark Office’s database.

It was originally filed back in September of 2008, meaning the company had likely begun researching the invention ahead of the original iPhone debut five years ago. The patent outlines a few exciting gaming accessories for portable devices, such as a receptacle system of sorts that could let your iPod be inserted to play games.

Another highlight worth mentioning is a gaming controller featuring cameras, motion sensing, a dual-display configuration and physical buttons on the back coupling a multitouch surface on the front.

And now, AnandTech drops a little nugget with claims that yes, Apple is in fact working on a gaming controller for iPads and other iOS devices…

Note: the above image represents ThinkGeek’s iCade 8-Bitty gaming accessory for the iPad and is only used for illustrative purposes.

The publication slipped in the following line in its exhaustive iPad 3 review from last week:

I know of an internal Apple project to bring a physical controller to market, but whether or not it will ever see the light of day remains to be seen.

Given their expertise and credibility, there’s no reason to doubt authors Vivek Gowri and Anand Lal Shimpiwho. Plus, the aforementioned patent proves that – if anything – Apple is at least theorizing on how to take iOS gaming to the next level.

While suggesting the new iPad may lack the oomph to drive native Retina games at acceptable frame rates, the authors “feel like the controller problem must be addressed”.

Another reason for a physical, Apple-branded controller for iOS gaming? Android, which a year ago brought out basic support for various gaming peripherals hosted over an USB port or wirelessly, via Bluetooth.

A physical controller would tie in nicely with Apple’s set-top box dubbed the Apple TV which helps wirelessly beam whatever is displayed on your iOS device to a TV set, though with a slight (but noticeable) lag.

‘Games’ is the most profitable App Store category and Apple’s a major player in the gaming space. According to Flurry Analytics, Apple as of last year held an estimated 58 percent of U.S.-based game software revenue, a trifold increase compared to 2009. Plus, they’re hiring top talent in this space.

When you think of it, Apple really does not need to put out a dedicated gaming console.

I believe AirPlay technology coupled with that rumored HD TV set with the shiny Apple logo on it and the company’s comprehensive lineup of mobile products eventually hold the keys to conquering your living room.

And with both Sony and Nintendo bleeding money due to strong sales of iOS games, all that Apple really needs is an intelligent gaming controller with both physical and touch-based input.

Can you see the company throwing its weight behind a dedicated gaming peripheral for iOS gadgets?

Does it even make sense?