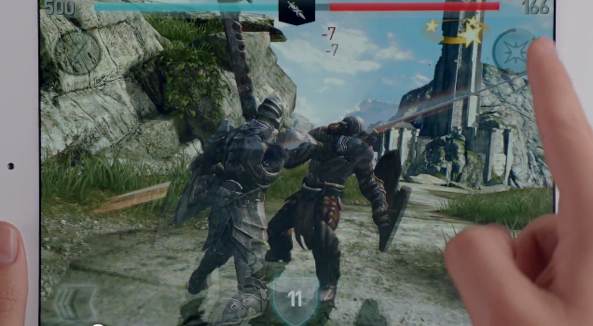 AnandTech on Wednesday posted their review of the new iPad. Per usual, the 21-page article goes into every aspect of the device in excruciating detail. The most interesting takeaway includes an in-depth analysis concerning the gizmo’s graphical prowess and how the enhanced A5X chip stacks up in high-resolution games against the iPad 2 and latest crop of Android tablets powered by Nvidia’s Tegra 3 silicon.

For starters, the publication portrays the A5X as “an absolute beast” of an system-on-a-chip. But, its power comes at a price because – as it is implemented in the new iPad – the A5X “under load consumes more power than an entire iPhone 4S”.

We kinda knew that, so just how fast is its quad-core GPU and can we expect jaw-dropping Retina games running natively in all their 2,048-by-1,536 pixel glory and – most importantly – at satisfactory frame rates?

Well, according to authors Vivek Gowri and Anand Lal Shimpiwho who know these things inside out, the A5X shows “a roughly 2x increase in triangle and fill rates” in GPU benchmarks at the 1,024-by-768 resolution of iPad 2. As a result, the new iPad delivers roughly twice the performance of its predecessor. Again, at the iPad 2’s 1,024-by-768 pixel resolution.

In many ways in the A5X is a very conservative design, while in others it’s absolutely pushing the limits of what had been previously done in a tablet.

This 2x speed increase draws from the four GPU units inside the A5X chip versus two on the A5 silicon inside the iPad 2. Note that both chips are based on the PowerVR SGX 543 GPU design from Imaginaton Technologies, the only differentiator being twice the GPU cores and the improved memory bandwidth.

Since we’re still on a 45nm LP process, GPU clocks haven’t increased so we’re looking at a pure doubling of virtually all GPU resources.

You won’t notice this speed gain much in most iPad games updated for the Retina resolution, such as Shadowgun and Grand Theft Auto 3. The reason being, they resort to a trickery involving rendering the scene at 1,024-by-768 and upscaling images to the 2,048-by-1,536 resolution, using antialiasing to smooth out the pixels.

The end result is a nice-looking game on the new iPad’s Retina display that’s really being rendered at the iPad 2’s resolution. 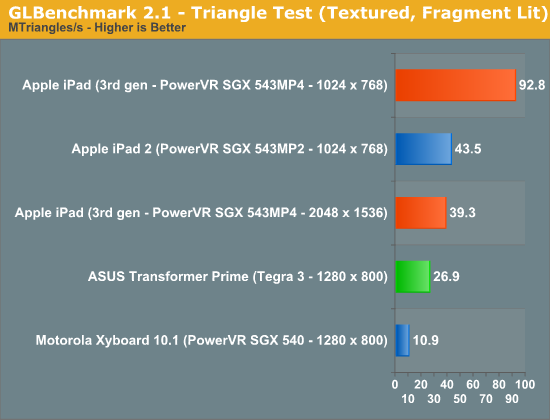 When it comes to gaming at the new iPad’s native Retina resolution, frame rates “can drop to well below” what the iPad 2 delivers. Why? Because the two times speed gain offered by the quad-core GPU doesn’t offset the four times pixel count increase of the Retina display.

It’s because of this drop in performance at the iPad’s native resolution that we won’t see many (if any at all), visually taxing games run at anywhere near 2048 x 1536.

The bigger takeaway is that with the 543MP4 and a quad-channel LP-DDR2 interface, it is possible to run a 3D game at 2048 x 1536 and deliver playable frame rates. It won’t be the prettiest game around, but it’s definitely possible.

“Playable frame rates” may be sufficient for casual games, but likely won’t cut it for 3D shooters and other graphics-intensive titles.

And the fact that both the new and “old” iPad run the same dual-core Cortex-A9 MPCore CPU with NEON SIMD accelerator from ARM Holdings isn’t helping either.

“With no change on the CPU side, CPU performance remains identical to the iPad 2”, the publication explains. That’s why the new iPad is slower when reading magazines. 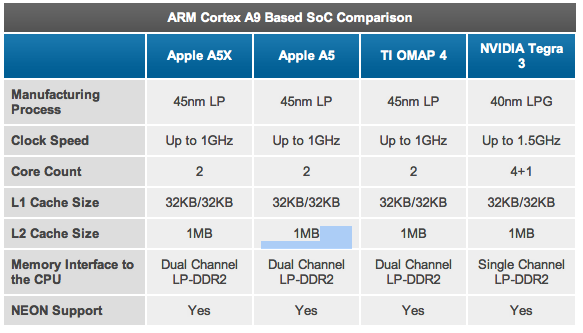 While gaming at the native Retina resolution is feasible on the new iPad, it all comes down to frame rates and developers’ ability to really push the A5X chip to its extremes.

The aforementioned caveats probably won’t affect a few triple-As from the biggest developers with the most resources. I’m talking about so-called system sellers, such as the upcoming Infinity Blade Dungeons from Epic Games.

My sources in the graphics industry convince me that a handful of cherry-picked developers enjoy preferential treatment because Apple is fond of positioning iOS gadgets as portable gaming consoles, among other things.

Disappointed? Do you still think the new iPad has enough horsepower to drive graphics-intensive games natively at the Retina display resolution and at frame rates matching or exceeding those on iPad 2?