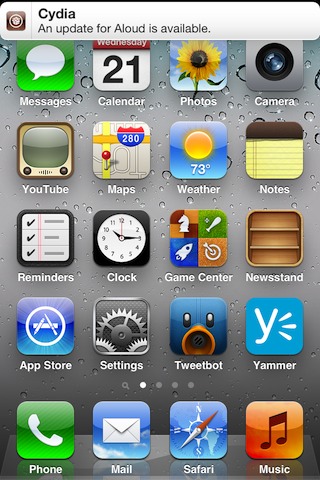 Ever since we first saw the sneak preview of Ryan Petrich’s CydiaBulletin, we’ve wanted something like it.

Now it looks like having notifications for Cydia updates is finally a reality, even if it’s not exactly as Petrich had envisioned.

Aptdate is a new jailbreak tweak that will be soon available on Cydia, which provides banner notifications to alert you when there are updates in Cydia.

We’ve given it a spin on video, check out our walkthrough inside…

Due to there being no updates in Cydia at the time of my walkthrough, I wasn’t able to put the tweak through the paces; though, I was able to test it out in a limited fashion.

From what I could tell, Aptdate worked as advertised. Now I’m just waiting for one of the repos to be updated to see how it works under pressure.

The developer, Adam D (aka thekirbylover), let me know that Aptdate should alert you for “every repo set up in Cydia”. I’m assuming this includes 3rd party repos as well.

Perhaps this tweak will urge Ryan Petrich to release CydiaBulletin (hey, he recently teased an iPad release!), but I’ve heard there are some interesting logistics behind its release that could be keeping it in limbo.

Until then, there’s Aptdate, a very promising looking tweak that will be released soon on Cydia’s ModMyi repo. Oh, and did I mention that it will be free?

What do you think? Do you want to be alerted via a banner notification whenever there’s an update in Cydia?