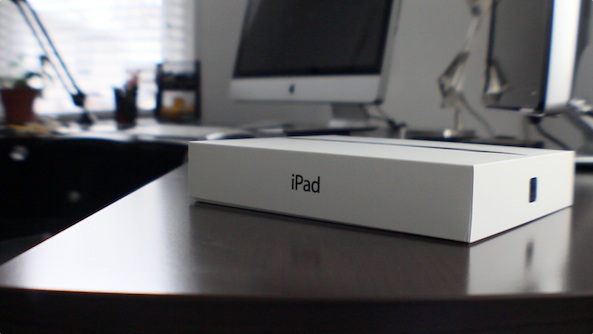 While the company’s stock just closed at an all-time high this afternoon, Apple has just announced some staggering numbers. According to a press release just issued by the Cupertino-based company, it’s sold 3 million iPads since its launch on Friday. Customers just couldn’t wait to get their hands on the new Retina display glory.

Apple® today announced it has sold three million of its incredible new iPad®, since its launch on Friday, March 16. The new iPad features a stunning new Retina™ display, Apple’s new A5X chip with quad-core graphics, a 5 megapixel iSight® camera with advanced optics for capturing amazing photos and 1080p HD video, and still delivers the same all-day 10 hour battery life* while remaining amazingly thin and light. iPad Wi-Fi + 4G supports ultrafast 4G LTE networks in the US and Canada, and fast networks around the world including those based on HSPA+ and DC-HSDPA.**

“The new iPad is a blockbuster with three million sold―the strongest iPad launch yet,” said Philip Schiller, Apple’s senior vice president of Worldwide Marketing. “Customers are loving the incredible new features of iPad, including the stunning Retina display, and we can’t wait to get it into the hands of even more customers around the world this Friday.”

**4G LTE is supported only on AT&T and Verizon networks in the U.S. and on Bell, Rogers, and Telus networks in Canada. Data plans sold separately.

Apple designs Macs, the best personal computers in the world, along with OS X, iLife, iWork and professional software. Apple leads the digital music revolution with its iPods and iTunes online store. Apple has reinvented the mobile phone with its revolutionary iPhone and App Store, and is defining the future of mobile media and computing devices with iPad.

We’ve heard a few loose numbers from this weekend, but Apple’s press release ties things up. We heard this afternoon that the Fifth Avenue Apple Store in New York City sold 13,000 iPads in the first 12 hours — which is pretty staggering. AT&T also announced today that it had record iPad sales and activations when the new iPad launched last Friday.

The lines at Apple stores weren’t exceptionally long this weekend, however, that’s most likely due to customers being able to pre-order the tablet in advance.

But perhaps contributing to the big majority of the sales of the new iPad is its availability worldwide. On launch day, the third-generation tablet out of Apple was available in the US, Australia, Canada, France, Germany, Hong Kong, Japan, Puerto Rico, Singapore, Switzerland, UK and the US Virgin Islands. It will also be available in 24 more countries starting on Friday, March 23.

Apple is also counting pre-order devices that haven’t yet been delivered to customers. You may remember that shipping times were initally pushed back as stock ran out. If you’ve yet to get a new iPad, you can hop down to your local Apple store to pick one up.