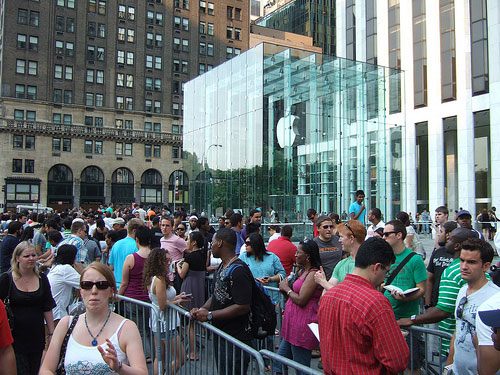 Earlier today, both AT&T and Apple announced that they saw record-breaking iPad sales over the weekend. Neither company, however, gave any kind of specific sales figures.

Wow, selling nearly 20 iPads a minute for 12 straight hours is quite a feat — especially for a single retail location. But perhaps even more interesting is the fact that the Fifth Avenue store had that kind of inventory on hand.

Last year, retailers saw almost immediate supply shortages after the iPad 2 launch, receiving only a handful of units per day for about a week before the tablets were completely sold out. Apple was obviously a bit more prepared this time around.

This might also explain why some news outlets are reporting a lack of demand for the new iPad, as several resellers around the country are claiming to still have inventory left. For what it’s worth, I visited our local Apple Store in Portland, Oregon, and then another one in Seattle, Washington over the weekend, and both had lines out the door.

It’ll be interesting to see how many tablets Apple sells this quarter, considering it’s coming off a record-breaking holiday period. We should hear those numbers during the company’s earnings call sometime next month.