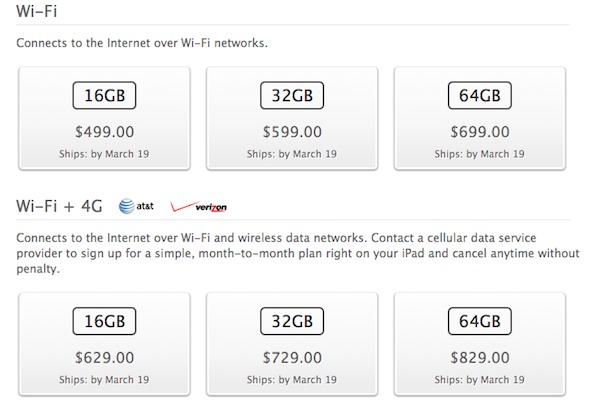 Well that didn’t take long. Apple has now sold out of all new iPad models (here in the US at least) that were allotted for pre-order sales.

Yesterday, we pointed out that shipping times were slipping to March 19th on some models of Apple’s latest tablet. But now it appears that all versions are seeing the delay…

As noted by Cult of Mac, if you go to pre-order a new iPad from Apple’s online store right now, the earliest you can have the device shipped is March 19th — regardless of color or model.

So if you’re wanting to get your hands on the new slate by launch day (March 16th), it looks like you’ll have to go hop in line at your local retail store.

Even if you don’t mind receiving your new iPad a few days late, you still may not want to hold out on ordering. Last year, it took Apple several months to catch up with consumer demand for the iPad 2 after its initial stock was depleted.