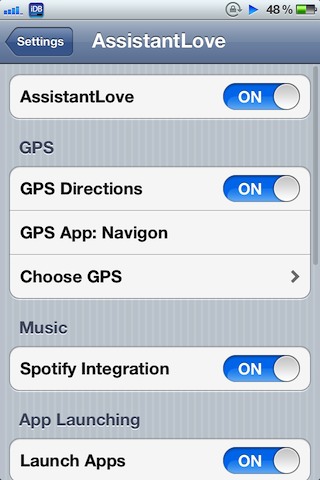 If you know me, you know I’ve been waiting on a way to integrate Spotify with Siri’s voice search for a long time.

I’m happy to say that it’s finally here. AssistantLove can launch your favorite songs on Spotify via Siri, theoretically giving you a seemingly infinite library of songs right at the command of your voice.

Not only that, but AssistantLove features GPS app integration with TomTom, Navigon, and other popular GPS apps, and that’s not all…

The Spotify integration, while not perfect, is pretty accurate if you know exactly what you want to listen to. More times than not it was able to pull up exactly what I wanted to hear on the fly.

The problems stems from the fact that there are so many songs on Spotify with similar names or alternate versions, so it’s not really the tweak’s fault, but it’s mainly due to Spotify’s breadth. Hopefully there will be a better way to narrow down queries more accurately and efficiently.

I was not able to get the GPS working thus far, but I am only using a regional version of Navigon, and have not tried it with other GPS apps as of yet. The verdict is still out on the tweak’s GPS integration capabilities, we’ll be back with further analysis.

Other than those two huge features, AssistantLove features the ability to contextually launch apps, so I can say “launch Twitter,” and it knows to launch Tweetbot. Very nice.

It’s also capable of assigning aliases to specific apps of your choosing, so I can say “launch elephant,” and make it launch Activator, for instance.

For a $1.99 jailbreak tweak, the Spotify integration is worth the admission alone, but obviously you will need the Spotify app and subscription before trying to use it.

Head over to Cydia’s BigBoss repo today and give it a shot. It comes highly recommended by yours truly, but that’s partially because I’m such a Spotify-geek.

Let me know what you think about AssistantLove in the comments below.