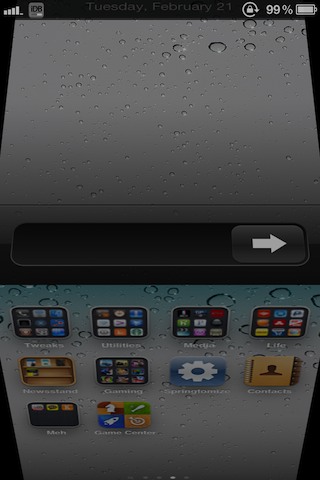 If the first thing you though was: “Hey, that looks like UnlockFX,” then you’re not alone, I thought the same thing too.

But after a little bit of testing, I’ve confirmed that there just may be enough differences between UnlockFX and iUnlock to warrant a look.

While its animations aren’t as original and inspired as that of UnlockFX, iUnlock does feature a few more bells and whistles to make it worthy of your consideration…

There’s also the matter of a 3-day free trial, which I believe more developers should adopt. Not only would this help eliminate those who pirate to “test” an app or tweak, but it also makes it easier to compare when another tweak borrows so heaviliy from an original idea.

At any rate, you have nothing to lose by trying iUnlock. As long as you have a jailbroken iPhone, iPad, or iPod touch running iOS 5, you should be good to go.

Again, iUnlock comes with a free trial, but a full license will set you back $1.99. If you’re interested, head over to Cydia’s BigBoss repo where you can download it today.

Also, be sure to check out our UnlockFX coverage if you’re still sitting on the fence as to which one to purchase. Let me know what you think in the comments below.