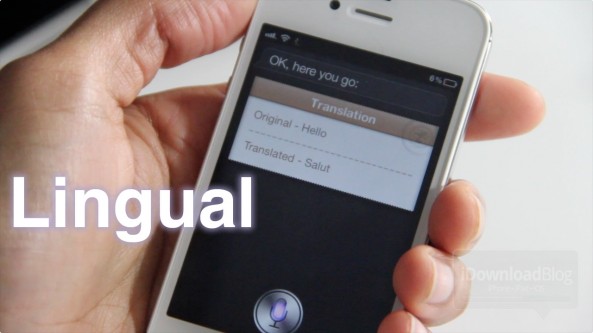 And the Siri tweaks just keep rolling in. Lingual is one of the first 3rd party extensions for the awesome AssistantExtensions tweak that we covered earlier. It allows you to translate phrases or text into a variety of languages from the comforts of the Siri interface, and it’s awesome for language learners and travelers.

It really is amazing what some developers have been able to do in the short period that the iPhone 4S has been jailbroken, and this one is nothing short of spectacular.

After installing it, all you need to do is Say, “translate [phrase] to [language]” or, “what’s [phrase] in [language]”, and let Siri handle the rest.

You will need the AssistantExtensions tweak installed for Lingual to work, as it piggybacks that tweak as one of the first extensions to take advantage of the platform.

CodeThemed, the developers of the tweak, really outdid themselves, and although the tweak isn’t yet perfect, it’s impressive how well it works at this stage. What’s even sweeter is that they plan to release it for free.

Lingual should be available in the near future, and we’ll be sure to update you once it touches down on Cydia.

Are you impressed? Could you see yourself using this?

UPDATE: Lingual is now available in Cydia. Go get it!