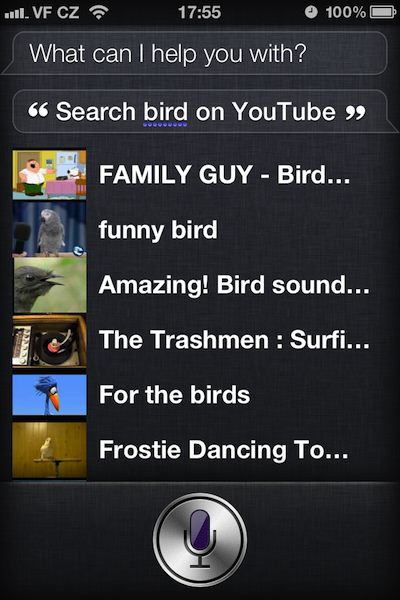 If there is one good reason to get an iPhone 4S, it’s Siri, the iPhone’s witty virtual assistant that can help you do various tasks such as searching the web, scheduling appointments, send messages, etc by simply using voice commands. Siri can do many things, but there are also many things Siri can’t do.

Sure you can set up a Siri proxy and and install plugins to have Siri do things she’s not supposed to – like starting a car – but for most people, the technical hustle to get this going is not even an option. It’s just not practical.

AssistantExtensions comes with a few built-in commands, including:

This is great, but it gets even better! AssistantExtensions offers a simple framework for people to create their own extensions. With some basic knowledge of Objective-C, you can come up with your own extension for virtually anything you want.

So far, and besides the built-in ones, there is only one extension available, which allows you to search YouTube and shows results with thumbnails. This is just the tip of the iceberg, though. There is no doubt these extensions are going to pop up all over Cydia within the next few days.

As I mentioned above, AssistantExtensions is currently free on Cydia, via the BigBoss repo. At this price tag, and considering what it does, I highly suggest you give it a try.

I’m sure Jeff will have a detailed video demo soon, so don’t go too far, and check back iDB later tonight for our full on walkthrough.

In the meantime, you can earn some major brownie points by coming up with an iDB extension that lets you search the site using Siri. Just saying…