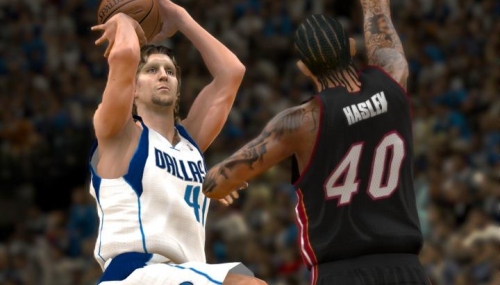 It looks like Apple’s next smartphone isn’t the only product unveiling set for next Tuesday. 2K Sports is set to unleash the latest version of its basketball game for the iOS platform next week.

NBA2K12 contains all of the usual components of a typical basketball game. You can choose from both quick play and full season modes, and it even works with Game Center. But the coolest part of the game has to be…

NBA2K12 will be the first mobile sports game to feature the one and only Michael Jordan. In fact, he’ll have his own game mode called the Jordan Challenge (which you may remember from the console version), where you’ll relive Jordan’s 10 greatest performances.

Here’s what CNET had to say about the gameplay:

“The graphics are what you’d expect on an iOS device for a sports game. Player models are decent, but player faces mapped onto a generic shaped head can look pretty bad at times. What’s most important is the gameplay, and 2K12 plays smoothly; players on the floor are well spaced and the animations are great. Basketball is more than just dunking, and it’s not that easy to get to the rim if you want to show off. The broadcast-TV-style presentation really separates it from other iOS sports games, with full commentary and replays that add extra polish.”

While the game has its shortcomings, the overall package is quite impressive. NBA2K12 will cost $9.99 for the iPad version, and $4.99 for the iPhone cut. The price seems a bit steep compared to other iOS titles, but keep in mind that console versions run $60 bucks.