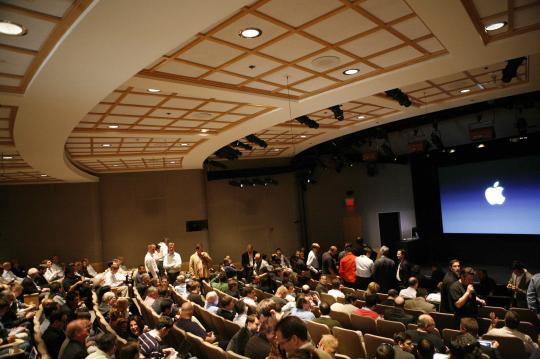 AllThingsD has come back with more news on Apple’s upcoming October 4th media event. In the past, Apple has always held its big events in San Francisco at venues like the Yerba Buena Center for the Arts.

This year is proving to be different. Apple will be holding its iPhone announcement at its own headquarters…

“Sources close to the company say the demonstration will be held at Apple’s campus in Cupertino, California.”

It’s unclear as to why Apple has chosen to hold its next huge announcement closer to home. AllThingsD suggests that Apple had trouble nailing down the actual announcement date, possibly due to production delays, so it was too much of a gamble to book a large venue like the Yerba Buena Center. Apple could also want a more “intimate” setting for new CEO Tim Cook to helm his first product launch.

“Whatever the reason, the world will get it’s first look at the next iPhone at Apple’s Town Hall Auditorium in early October.”

Apple is rumored to announce new iPhone hardware, iPod touch hardware, iOS 5, and iCloud at its event next month. There’s no guarantee that Steve Jobs will make an appearance, but we can always hope.