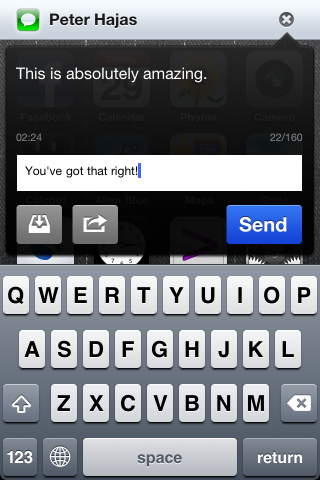 In a surprising move, Peter Hajas has released his last version of the popular iOS notifications jailbreak replacement, MobileNotifier. We covered another blog post of Peter’s yesterday, in which he declared that he was leaving as the head of the development team for MobileNotifier.

Right after we reviewed Beta4, MobileNotifier Beta5 “Ecstatic Eggo” has now been released in Cydia. And Peter is calling Beta5 the most “revolutionary release since the project’s inception.“

We speculated that Peter Hajas could have been hired by Apple to work on notifications in iOS. He even left an easter egg in his blog post that hinted at an allegiance with Apple.

Whether he has left MobileNotifier to join Apple or not, something interesting is definitely going on with Peter Hajas and MobileNotifier.

I’m presenting the final release of MobileNotifier that I’ll have a part in before my absence. MobileNotifier beta5,Ecstatic Eggo. This release is big in more ways than one. It’s the most revolutionary release since the project’s inception.” 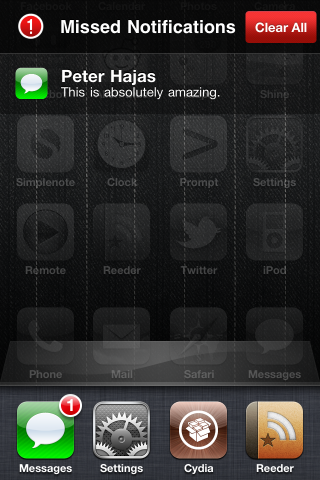 If MobileNotifier wasn’t already good enough, it just got nearly perfect. The new design and usability improvements address almost all of the previous issues that hindered MobileNotifier from being the best notifications replacement for iOS.

Namely, in Beta5, you can now quick reply to incoming SMS messages without going into the Messages app (much like biteSMS). The process of deleting and working with multiple notifications has also been streamlined.

A huge thanks to Peter and the MobileNotifier development team for putting together another solid release of a very powerful notifications replacement. We don’t know for sure where Peter Hajas is going with his future endeavors, but we wish him the best.

You can download MobileNotifier Beta5 for free from Peter’s repo: phajas.xen.prgmr.com/repo

Let us know what you think of MobileNotifier Beta5. Has it become your notifications replacement in iOS? Do you still prefer other tweaks like Notified Pro or LockInfo?