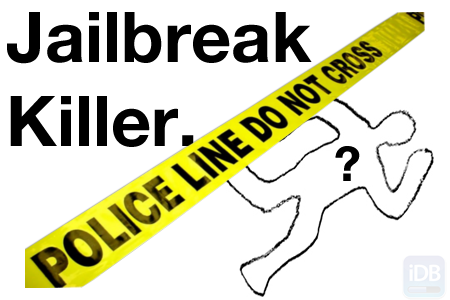 It hasn’t been 20 minutes since I published a post about iOS 5 likely to take a stab at the jailbreak community that Apple may have already claimed its first victim. Its name? MobileNotifier, the exact same app we reviewed and praised this morning.

After spending 8 months working on MobileNotifier, Peter Hajas announced on his blog minutes ago that he was “taking a break from MobileNotifier and Widge for a while”. Simple coincidence, or did Apple made him an offer he can’t refuse?

I’m taking a break from MobileNotifier and Widge for a while. I have other opportunities and priorities currently. I won’t be able to do much (if any) work on the projects, and I won’t have time to respond to many Tweets or emails. The project is in capable hands, with Kyle Adams, Tim Novinger and others (like Marc Easen) keeping things going. This is definitely not goodbye.

I can’t say why, but it’s worth it. Trust me. If you look around hard enough, you’ll probably figure it out.

I hope you guys understand, and I look forward to bringing you more awesome, great, free open source software in the future. Stay tuned for some amazing things!

Jeff and I briefly discussed this and we quickly came to the conclusion that Hajas was most likely offered a job at Apple. We might be wrong but if you look at parts of Hajas’s statement we highlighted above, it does make lots of sense.

Clearly Apple has already figured out notifications in iOS 5, but I’m sure some extra brains wouldn’t hurt the team working on that.

I wonder if our MobileNotifier review got Apple’s attention. The timing sure is right.

Update: Hajas just tweeted: “You guys have some lively imaginations!” This might just be coincidental timing.