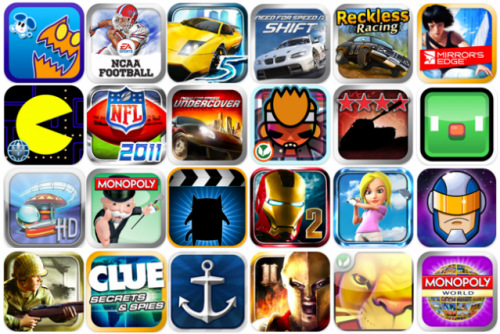 We’ve seen that the iPhone isn’t just a popular smartphone, it’s also an extremely popular camera. But apparently those aren’t the only categories that Apple’s Swiss Army Knife-of-a-device ranks highly in.

Gamasutra, the website for everything video games, has recently reported some interesting facts from the Guinness World Records 2011 Gamer’s Edition. We knew that iDevices were popular gaming machines, but had no idea how popular…

“The release of the iPhone has not just changed the mobile industry, but the video game world too,” says Guinness World Records Gaming Editor Gaz Deaves. With an equipment price on par with the competition and a huge inventory of both free and low-cost games, the iDevices have certainly been a game changer.

While I don’t consider myself an avid gamer (especially on the iPhone), I did find these statistics quite interesting:

Largest Launch Line-up of Any Gaming System – When the Apple store launched on July 10, 2008, it featured over 500 apps including 145 games. For folks who remember the PS3 launch, there were less than 30 titles.

Fastest-Selling Portable Gaming System – The iPhone 4 is estimated to have sold 1.5 million units on the first day it was available, compared to 200,000 PSP units sold on launch date.

Largest Downloadable Video Game Store – There are over 37,000 games available in the App Store. There are 1300 Xbox Live Arcade titles and about 600 Wii titles available for download.

Top Paid-For App Store Game in Most Countries – Angry Birds has been recognized as the top paid-for game in Apple’s App Store in 67 territories worldwide and has sold over 6.5 million copies.

I realize the iPhone is also a phone and a camera, so its extra functionality gives it an edge over other portable gaming devices. That certainly doesn’t change how much iOS devices have impacted the handheld gaming market.

And with rumors floating around that Apple picked up a couple of high profile gaming PR executives, it doesn’t look like Apple is slowing down anytime soon.

Do you use your iPhone or other iDevice for serious gaming?