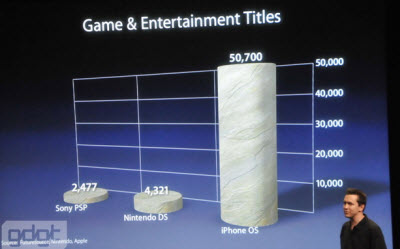 We’ve told you before that Apple seems to be pretty serious about gaming. First it was the addition of the Game Center, then they hired 2 top PR execs from the likes of Nintendo and Activision.

Business Insider mentions an interview with Graeme Devine who reiterates Apple’s aggressive stance on gaming. The man who was named one of the Top 100 Game Developers of 2008, told IndustryGamers that Apple is intensely focused on gaming, and is intensely aware of it…

Devine worked on major titles like Quake 3 and Halo Wars, before eventually landing at Apple in 2009. His role there was to make sure that iOS devices played games well. Graeme has since left Apple and now owns GRL Games, but needless to say he’s qualified to speculate.

“Game Center is a start, but Apple never puts anything out and says, ‘Okay, now we’re done.’ They only progress that software on, and that’s only going to expand up. I think if you look at the array of Apple between moving some of the iOS stuff onto the desktop, the Apple TV with AirPlay, and the iPad and the iPhone, these things are converging. That’s exciting for game developers, I think.”

Apple TV is where I hope this is all heading. If Apple were to give the Apple TV some kind of App Store access and open up AirPlay capabilities, you’d have the most portable console system in the world.

It would be cool to see what developers would do with that technology. Any iDevice with iOS 4.3 would be capable of being a controller and a majority of those devices have built-in accelerometers. Think Wii-style games.

Whatever the case, it appears that Apple has some kind of intentions for the gaming industry. It’ll be interesting to see what they do next.

What do you think? Apple TV App Store the next big move by Apple for the gaming industry?