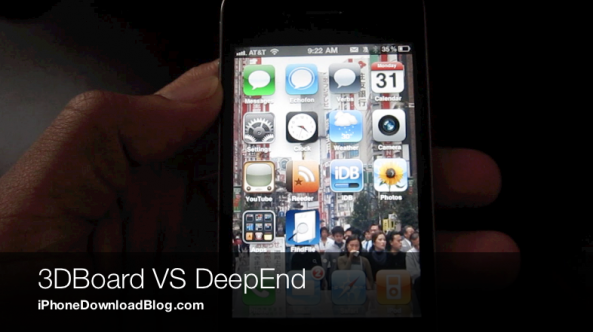 When we first posted about 3DBoard — a jailbreak tweak for the iPhone that lends a 3D effect to your Home screen — we were excited. When Ryan Petrich one-upped the release of 3DBoard with his own tweak entitled DeepEnd, we were delighted.

That’s because not only was DeepEnd available first, it kept a few extra dollars in our pockets by being free. But free doesn’t necessarily mean better; after all, you get what you pay for, or do you?

Check inside for the full video evidence, as we compare these two popular iPhone jailbreak tweaks head-to-head…

I still find it interesting that just as the news broke about 3DBoard, Petrich comes out of nowhere with DeepEnd. This leads me to ask the question, who’s tweak was in development first? Quite the interesting turn of events, indeed.

One thing I do like about 3DBoard is the built-in toggle to outright disable the effect. With DeepEnd, you have to turn down each of the three sliders in order to disable it.

But, at the end of the day, the unanimous decision is in favor of DeepEnd. Not only is it free, it simply brings more to the table than 3DBoard does thus far.

I’d advise you to save your money, and go with DeepEnd. No pun intended, but it’s the deeper of the two 3D Home screen tweaks thus far.

Just a point of note: these tweaks require the iPhone 4’s gyroscope, so if you have older hardware, you’ll have to sit this one out.

Which one are you rolling with?