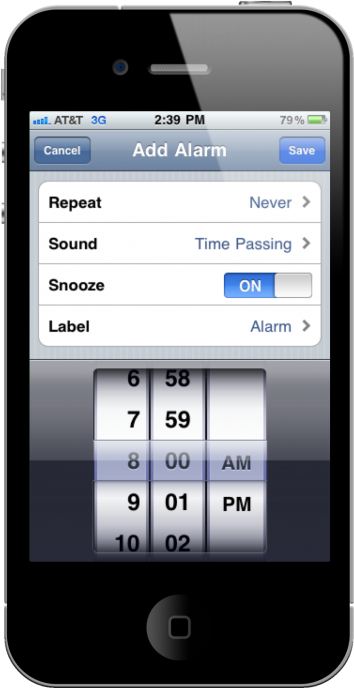 There have been reports of outrage from iPhone users who weren’t woken up by their iPhone alarm on New Year’s Day morning. There is still mystery surrounding why this problem has occurred, but it seems to be widespread enough to raise concern.

As of 1/1/2011, users began complaining on Twitter that their alarm in the iPhone’s clock app didn’t wake them up like normal. After the clock struck midnight to usher in the new year, all non-repeating alarms in the clock app failed to sound. This problem sounds like the Daylight Savings Time issue that the iPhone had back in November.

The point is, you if set your alarm clock on your iPhone to be woken up tomorrow, you’ll be getting more sleep than you intended…

Engadget reports on this new clock problem for the iPhone,

“We’re not exactly sure of the cause of this fancy new issue affecting Apple’s super cool iPhone line of cellphones, but apparently you’ve got trouble come 1/1/2011. According to an explosive stream of frustration-filled tweets on the Twitter microblogging service, when the clock strikes midnight, one off alarms will cease to sing out. The issue sounds eerily similar to recent Daylight Savings Time trouble we witnessed back in November, although we saw both repeating alarm and single alarm failures.”

The failures seem to only be with one-time alarms this time around. Repeating alarms do not seem to be affected by this calendar bug. To circumvent this alarm problem, you can create a reoccurring alarm for the time you need to be woken up. You can then disable the alarm if you don’t need it at that time for the following day.

9to5 Mac said that this problem will fix itself on January 3rd, 2011. There is ambiguity surrounding why this bug exists, but it’s nice to know that Apple won’t need to patch it with an iOS update.

This bug seems to be affecting multiple versions of iOS (including 4.2.1) and a comprehensive range of iDevices. If you rely on your iPhone alarm, it would be prudent to check and make sure you won’t be unknowingly sleeping in tomorrow.

Let us know if you had this problem with your alarm this morning, along with your iOS version and iPhone model. We’re curious to see how far reaching this problem is.

UPDATE: It appears that some users are still having this alarm glitch as of January 3rd. Check out our article on how to fix the problem if you’re still having it.