After just yesterday releasing TrollStore version 1.4 with significant changes to the way apps are perma-signed, project developer opa334 on Sunday released two consecutive updates for the popular hack for iOS & iPadOS 14.0-15.4.1 (and some 15.5 beta) devices with bug fixes that users won’t want to miss. 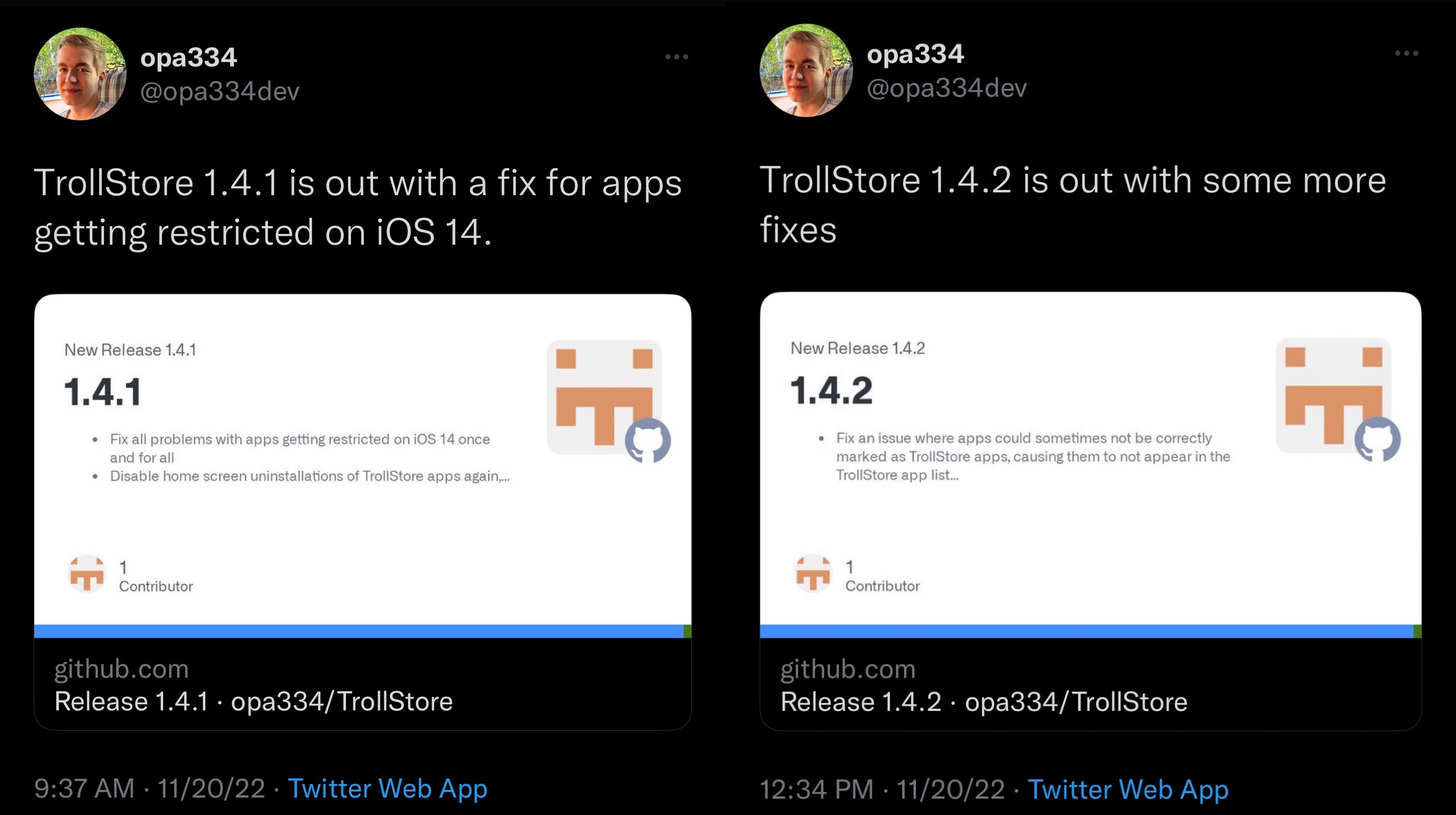 Both updates mentioned above were announced via Twitter a couple of hours apart from one another. Digging deeper into the changes in each update, we’ll discuss those separately below.

– Fix all problems with apps getting restricted on iOS 14 once and for all
– Disable Home Screen uninstall actions of TrollStore apps again, cause doing this would also cause the app to get restricted

It’s worth noting that deleting apps from the Home Screen was a major new feature of TrollStore version 1.4, but since this appeared to cause more issues than it was worth, it’s now disabled again. Anyone who already has an issue with restricted apps is being directed by the developer to reload their icon cache after installing TrollStore version 1.4.1 or later.

In version 1.4.2, TrollStore received even more fixes, most notably the following:

– Fix an issue where apps could sometimes not be correctly marked as TrollStore apps, causing them not to appear in the TrollStore app list
– Fix a theoretical issue that could maybe happen in some rare cases while adding an app to icon cache

If you’re an existing TrollStore app user, then it’s recommended that you update to version 1.4.2 as soon as you get the chance, especially if you installed yesterday’s version 1.4 update due to the issues that may arise with restricted apps. Updating is easy, as there’s an OTA (over the air) updating mechanism in the TrollStore or TrollInstaller app to make this a one-step process.

Those that aren’t already using TrollStore can grab the latest version from the developer’s GitHub page and use either of the following step-by-step tutorials to get started:

With TrollStore, you can perma-sign apps on an iPhone or iPad. This is similar to sideloading with utilities like AltStore or Sideloady, but different in that the installation becomes permanent (until you uninstall it) without the requirement of signing that app every seven days as you would need to with AltStore or Sideloady. TrollStore gets around signing with the help of a powerful CoreTrust bug that only supports iOS & iPadOS 14.0-15.4.1 (and some 15.5 betas).

Have you updated to the latest version of TrollStore yet? Be sure to let us know in the comments section down below.