The new Apple Arcade games in October 2022 to play on your iPhone, iPad, Mac and Apple TV include Stitch, an exclusive version of NBA 2K23 and more.

You can play 200+ games for free with an Apple Arcade subscription. For upcoming titles that have yet to launch, hitting the Get button on their Apple Arcade page will ensure that you get notified as soon as the game becomes available to download.

The classics are classic for a reason. Spider Solitaire: Card Game+ by @MobilityWare is ready to catch you in its web.

This is an Arcade version of MobilityWare’s take on the classic “spider” solitaire card game (which plays just like the spider solitaire version in Windows).

The game features daily challenges that will puzzle your brain, new levels, winning deals that guarantee at least one winning solution, unlimited undo and other perks.

The settings interface lets you customize the visuals to your liking with backgrounds and change the look of your cards. You can adjust difficulty levels and how you see hints, switch between landscape and portrait views, choose between right-handed or left-handed gameplay, track your statistics and more.

Spider Solitaire works on iPhone/iPad [App Store link] but not on Mac/Apple TV.

Gin Rummy Classic+ by @MobilityWare is ready to be dealt right into your hands, whether you’re a card shark or new to the game entirely.

Gin Rummy Classic+ is another puzzle card game from MobilityWare that has received an Apple Arcade treatment. How to win? It couldn’t be simpler— you must build your best hand by drawing or picking up one card at a time. Don’t worry, a tutorial will walk you through how to play Gin Rummy+ Classic.

You can play against human opponents of various skill levels (losing will teach you valuable gameplay techniques). You can also play offline against bots.

Landscape and portrait modes are supported. You get unlimited undo/hints without time constraints. With goal leaderboards and 300+ titles for your achievements, Gin Rummy Classic+ will challenge your brain and help improve your thinking.

Created by The Voxel Agents, this is yet another Apple Arcade remake of the classic App Store title. The Gardens Between+ is a single-player interactive experience tasking you with controlling time, which flows in all directions.

Arina and Frendt are best friends who end up in surreal gardens filled with objects from their childhood. The game takes the two friends on an emotional journey that “examines the significance of their friendship”.

To solve puzzles, you must manipulate time. The game sports a storybook-inspired art style and an ambient soundtrack by Tim Shiel. With simple controls and no text/speech or time pressure, you can play The Gardens Between+ at your own pace.

The Gardens Between+ is only available on iPhone and iPad [App Store link]. 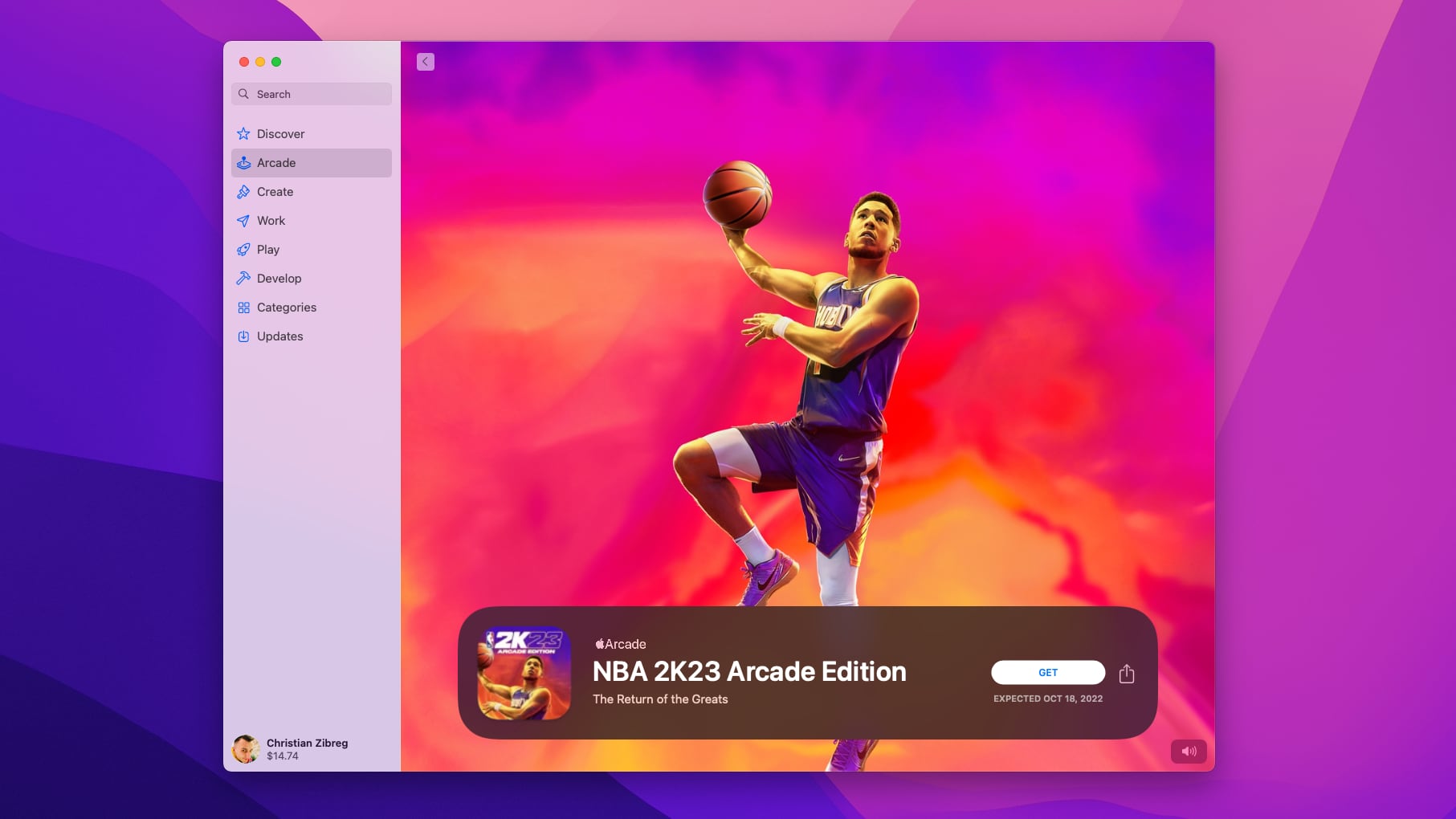 An exclusive version of the NBA 2K franchises by 2K Games is available to play on Apple Arcade with an all-new Greatest mode.

You must complete challenges to become the top finisher, shooter, play-maker or defenseman in the NBA. In this mode, you can go play against the 20 all-time players from the 76th NBA season like Devin Booker, Kevin Durant and Luka Doncic, as well as such legends as Michael Jordan, Shaquille O’Neal and Dirk Nowitzki.

The game lets you progress your career in the MyCAREER mode, change how your players look with licensed sports gear, position and jersey number, as well as adjust their height, wingspan, weight, play style and other characteristics.

You can play against rivals from around the NBA in 5v5 basketball games, engage in street basketball (1v1, 3v3 or 5v5) and compete in real-time multiplayer matches (the Xbox and PlayStation controllers are supported).

Stitch is an ingenious puzzle game by Lykkegaard Europe Limited, the same development studio that brought you App Store classics like Lumen and Tint.

So how do you play a game which attempts to simulate the art of embroidering? By filling in the areas without gaps, of course! There are over fifty hoops of various difficulties and sizes to complete and thousands of levels to choose from. Simply pick your preferred pattern, size and hoop category to get started. Completing challenges won’t just earn you points but also the ability to upgrade in tiers.

Stitch can be enjoyed on your iPhone, iPad, Mac and Apple TV [App Store link].

To see a list of upcoming titles, hit the Arcade tab in the App Store and scroll down, then touch See All Games. On the next screen, click Filters to narrow the list by release date and switch on the Coming Soon option.

Apple may remove some tiles from the catalog due to poor engagement, usually when contracts with their developers expire. The removed games are available to play on the service for two more weeks.

Apple Arcade gives you access to a growing library of over 200 games on your iPhone, iPad, Mac and Apple TV. The games are free of advertising, tracking and in-app purchases. Apple Arcade costs $5/month after a free trial.

You get three free months of Apple Arcade with a new iPhone, iPad, Mac or Apple TV purchase (for further information, visit apple.com/apple-arcade).