One of the key, tentpole features for Apple across its services, operating systems, and products is user privacy. They shout about it from the rooftops when given the opportunity. And it’s been like that for years. It’s a lot of the reason so many people have adopted Apple’s ecosystem into their lives. And yet, a new survey shows a lot of people out there still trust other companies more in this regard. 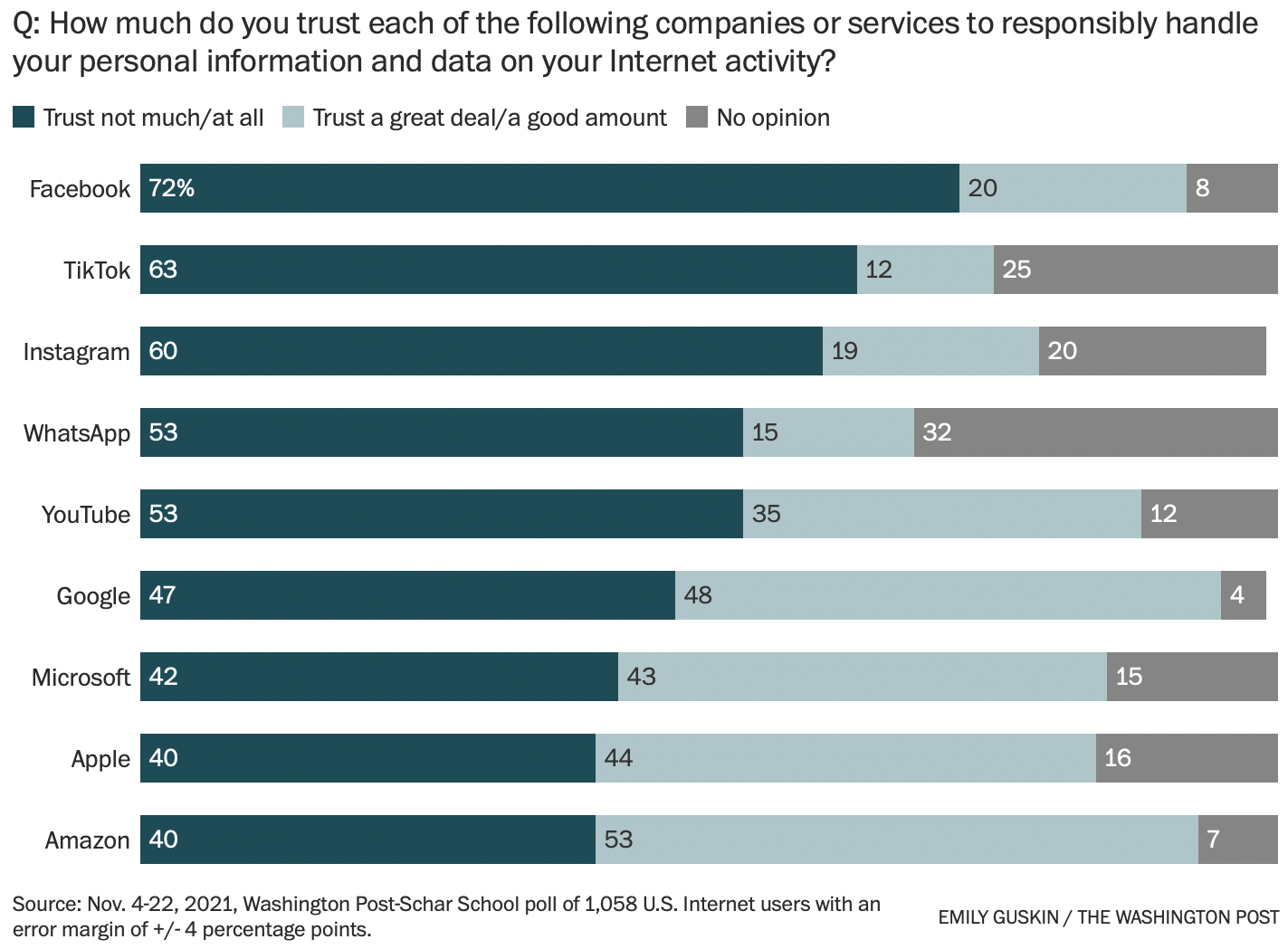 According to a new survey posted by The Washington Post, a lot of users trust Amazon and Google (Google!) with their personal information and data over Apple. Now, as is par for the course with these surveys, they are a very small sample of the overall population. Even of the population using these devices and services and platforms. In this particular survey, the Washington Post surveyed a little over 1,000 internet users based just in the United States.

The survey is meant to show just how much these users trust various platforms and companies. Names like WhatsApp, Facebook, TikTok, Apple, Amazon, Microsoft, Google, and others are included. When it comes to handling personal user information and data, Amazon took the number one spot. Next is Google. Apple does edge out Microsoft, at least, coming in at third.

Rounding out the top five is Microsoft in fourth and YouTube in fifth. You can see how it all breaks down in the graph presented in the original article above.

Things aren’t so bright for Facebook, per the report:

According to the survey, 72 percent of Internet users trust Facebook “not much” or “not at all” to responsibly handle their personal information and data on their Internet activity. About 6 in 10 distrust TikTok and Instagram, while slight majorities distrust WhatsApp and YouTube. Google, Apple and Microsoft receive mixed marks for trust, while Amazon is slightly positive with 53 percent trusting the company at least “a good amount.” (Amazon founder Jeff Bezos owns The Washington Post.)

The survey also queried the respondents regarding targeted advertising. Unsurprisingly, an overwhelming majority at 82% said that targeted advertisements that pop up while browsing the internet are annoying. 74% said they find these types of ads undesirable, while 27% said they are actually helpful.

The survey is an interesting one, for sure. Google has tried to work in privacy and user security as part of its Android platform for a few years now, at least. And yet, it’s still not as strong a message as Apple has been saying for much longer.

What do you think of these results? Do you use Apple products for the baked-in privacy and user security? Or do you trust Amazon or Google, or even other big tech companies, more than Apple in this regard?