After spending hours in the App Store looking for and trying out a multitude of multiplications apps for iPhone and iPad, I came to a daunting conclusion: there is nothing out there I would want my fourth-grade daughter to learn and practice her times tables with.

So I decided I would make my own app!

The problems with existing multiplications app

The gamification aspect: There are tons of math games in the App Store. On the surface, they look like a fun way to learn multiplication facts, but after watching my daughter play these games, I realized she wasn’t actually learning anything. She was effectively playing, not learning, even though the game mechanics made it look like she was exposed to multiplications and had to solve problems.

Multi choice quizzes: Most of these times tables apps don’t let kids actually look for an answer as they provide multiple choices to pick from. I didn’t want my daughter to get options. I wanted her to have to type in her answer.

Freemium: Finally, I realized that all these apps had money as their main reason for existence. That leads to some shady business practices such as sneaky or inappropriate ads, and questionable in-app purchases that would limit one’s ability to learn without having to shell out money. Not something I want for my app.

Features that I wanted for this app

Because I knew exactly what I didn’t want this app to be, it made the design process much easier. All I wanted was an app that had these features:

The timer feature was very specific to my daughter’s experience in school. Her multiplications tests must all be completed within a set amount of time. Typically it’s 50 questions in 3 minutes, or 100 questions in 5 minutes. I wanted her to be able to replicate the same time constraint in her quizzes in my app. I assume most schools in the US have the same kind of format for multiplication tests.

From there, everything went pretty quick. I mocked up the app design directly from my iPad and sent my sketches to a designer I worked with in the past.

I wanted to use somewhat neutral colors that would appeal equally to boys and girls. I settled for orange as it seemed to be the favorite in our household of 2 boys and two girls.

The app icon was a bit of a challenge, and to be honest, I’m still not very happy with it. I’m open to suggestions if you have any.

After a little bit of back and forth, the design was locked down in just a few days.

I then sent the design files to a developer I’ve also worked with before. Development took a little bit longer but was taken care of in just about a week. After all, this is a dead simple app to make with no bells and whistles. The app was made to run on iPhone, and on iPad (portrait only — in order to cut down on development cost a bit). 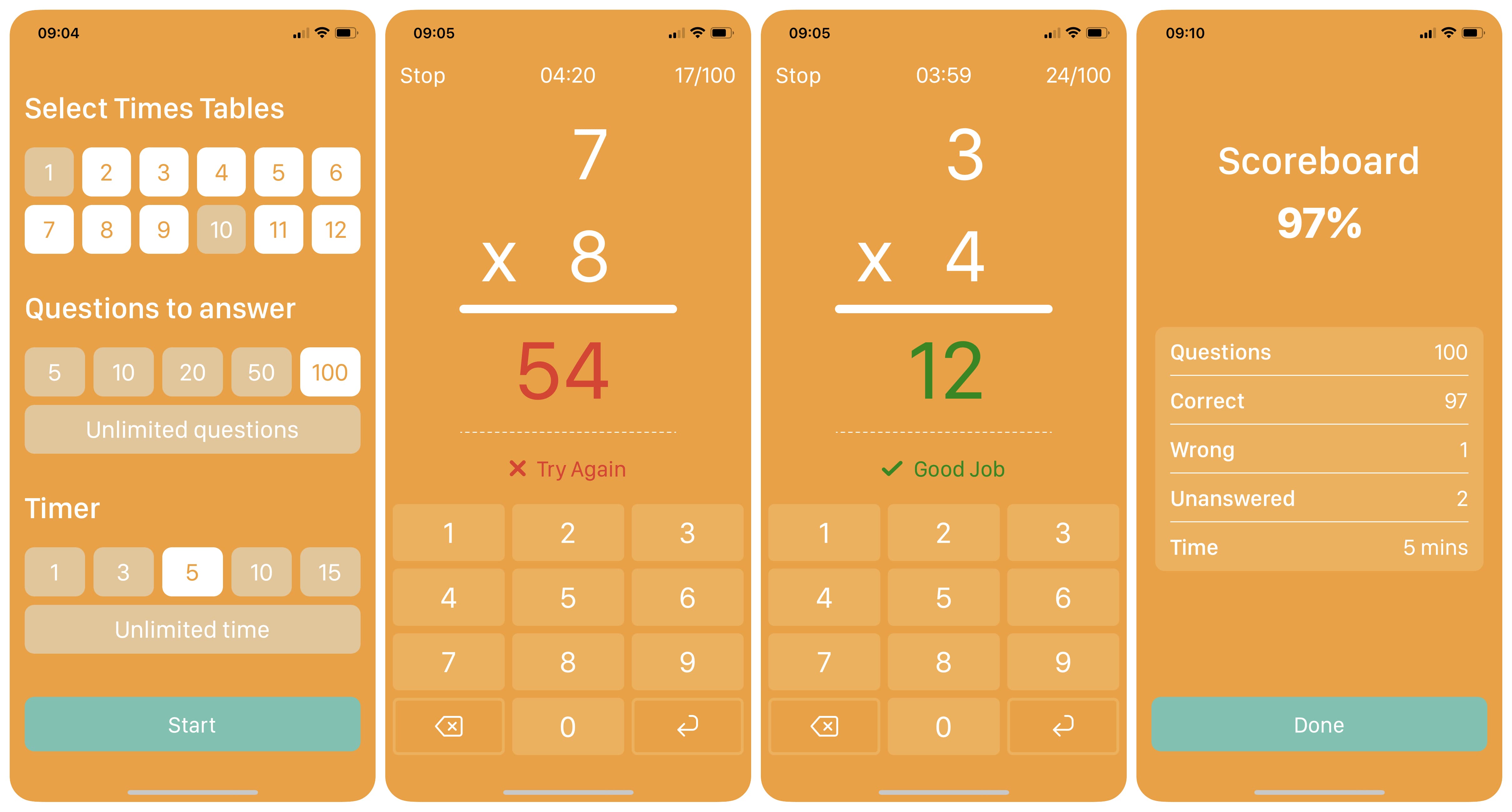 The best app for kids to learn times tables

The result is now available as a free app in the App Store under the name Times Tables – Multiplications. Yes, I know, I could have chosen a name with a bit more whimsy, but even though this app is free, I want it to be discoverable in the App Store when people look for such an app.

This app has proven to be almost addictive to my daughter as she tries to increase her score, or answer more questions in less time. Even though her teacher suggests kids spend 10 minutes a day learning and practicing times tables, I often get my daughter to spend 20 or 30 minutes on it just by kindly challenging her to do better.

I think the fact that this is an app for iPhone, and not just physical flash cards makes it more fun for her. Like most kids, she loves to be in front of a screen, and if doing multiplications is one way to accomplish that, then she seems to be ok with it.

This is the best app to learn multiplication facts to me, but it doesn’t mean it is perfect. There are still ways I could go about improving it, and depending on the app success, I will likely do just that.

This is a list of features I could add in future updates:

Give it a try!

If you have a kid or simply want to practice your times tables, give the app a try. And please also do give it a review in the App Store. Every 5-star rating really helps!

You can download my Times Tables app in the App Store for free.