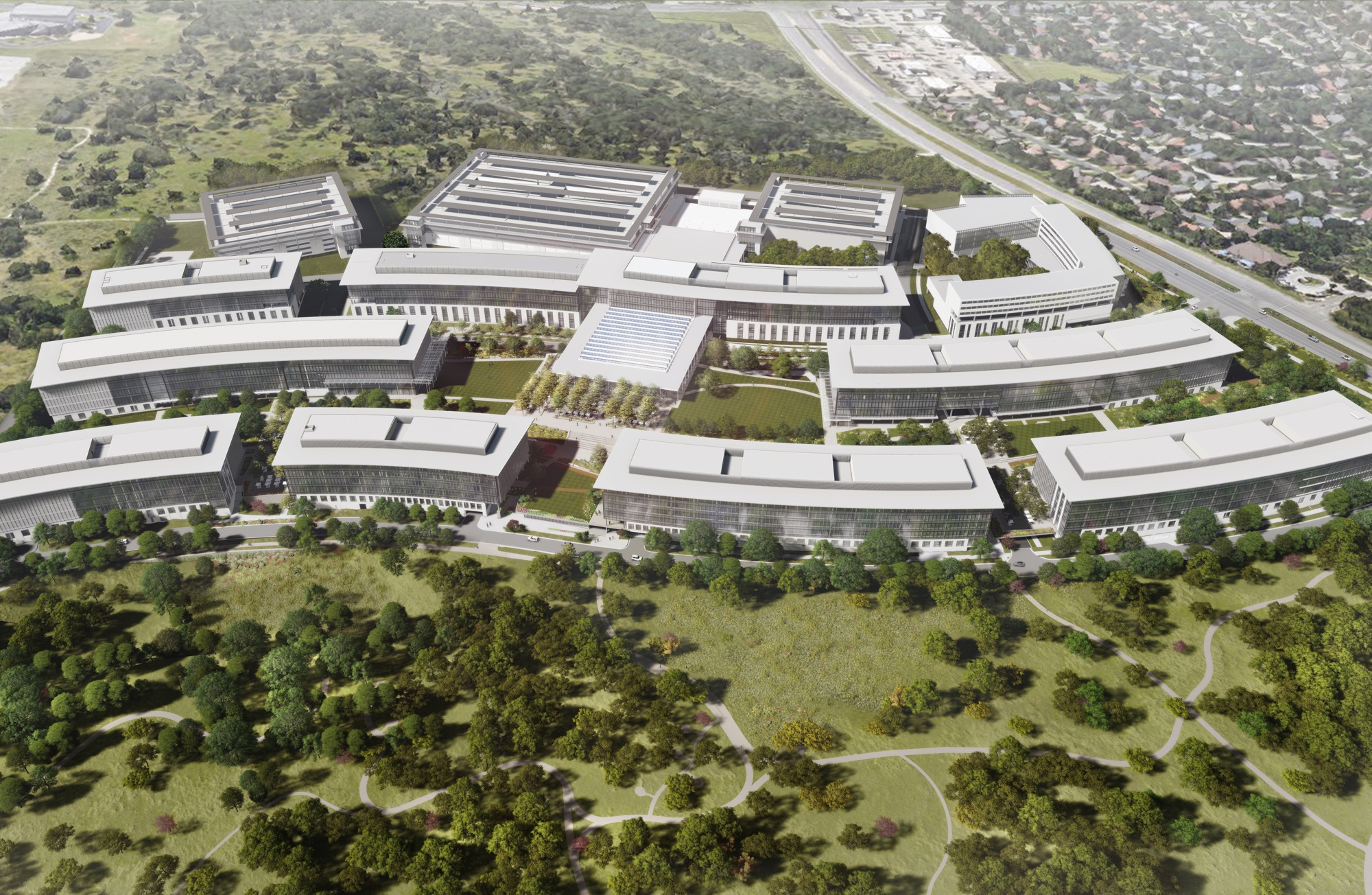 This week’s editor’s desk roundup has me thinking about Apple’s green plans for its second-biggest corporate facility in the U.S., the changes it’s making to iOS development for the next big release in 2020, and the way it’s treated one developer in particular. Read on for more details.

Apple announced mid-week that it’s broken ground on a $1 billion construction project in Austin, Texas. The new facility will house from 5,000 to 15,000 workers. Apple first announced plans to build the facility last year.

The groundbreaking news came the same day that President Trump visited Austin for a photo op at the Flex Ltd.-owned facility contracted by Apple to assemble the Mac Pro. The President created controversy after claiming to take credit for opening the plant, which employs 500 and has been open for years. It’s the same location where the previous “turbine”-shaped Mac Pro went into production in 2013.

Politics aside, it’s worth noting that Apple’s largest corporate footprint outside of Cupertino is Austin, where the company already employs more than 7,000 people. Apple’s employees based in Austin work in customer service, online sales, retail sales, finance and engineering, Tim Cook told the Austin American-Statesman back in 2017. He noted that the engineering team which manages Maps is also based in Austin as well.

Austin’s long been a hotbed of high technology, the home of “Silicon Hills,” the cluster of high-tech businesses based in the area including Amazon, AMD, Facebook, Google, eBay, and many other businesses. Dell’s worldwide headquarters are in the nearby Austin suburb Round Rock.

If the rendering published by Apple is any indication, the new Austin campus will lack the Stargate/mother ship toroidal magnificence of the stunning Apple Park HQ. But Apple says its new 3 million square foot Austin facility will be green – including a public 50-acre nature preserve populated by native tree species, and will derive its power from 100 percent renewable energy.

Last year Apple announced a long-reaching set of U.S. investments totaling more than $350 billion over five years. $10 billion of that alone is earmarked for data center build-outs; $40 billion for manufacturing; and another $30 billion in capital expenditures as the company continues to transform the way it does business in the U.S.

Apple announced those plans after the current administration passed favorable tax laws that enable Apple to repatriate money it’s been holding overseas. So perhaps it’s little surprise to see Tim Cook and President Trump rubbing elbows, or watching Cook let Trump get away with lying about how he “opened a major Apple Manufacturing plant.” For Apple and Cook, the stakes are bigger than the truth, it seems.

iOS 13 has been unlucky for Apple

Bloomberg reports that Apple’s head of software development, Craig Federighi, led an internal meeting with engineers recently to announce that the company’s internal testing processes for iOS 14 have changed from last year. Even before its general release to the public in September, iOS 13’s rollout was fraught with challenges, and Apple is anxious not to make the same mistake next year – especially, according to the report, with the company’s ambitious plans for new features and functionality in next year’s release.

Even during beta testing over the summer, the seams unraveled on iOS 13. Numerous bugs and missing features required Apple to bifurcate iOS 13’s release into an initial 13.0 drop followed by a 13.1 update several weeks later, a weird change that put off many folks.

This caused many experts, myself included, to wave off the 13.0 update to general users, advising them to be patient for the 13.1 update instead. Of course, lots of folks ignored that advice – and people routinely update their software when Apple tells them to anyway, adding to the problem. What’s worse, when 13.1 finally did arrive, it came with its own host of issues to fix. As it is, things still aren’t entirely ironed out, with Apple continuing to iterate iOS 13 with numerous feature adds and bug fixes – 13.2.3 is the latest general release and 13.3 isn’t far off.

Apple’s plan involves a new internal review and build process that provides better control over how new features and functionality are implemented, hopefully cutting down the number of show-stopping problems that occur when different engineering groups make essential changes to the underlying iOS code.

Apple has to do something, and fast. It has enforced an annual OS upgrade cycle for nigh on a decade now, but ten years ago there three product lines that required regular updates – the Mac, the iPhone, and the iPad – and the latter two ran the same software. Now Apple is juggling iOS, iPadOS, tvOS, watchOS, and macOS, and has kept them all locked into an annual upgrade cycle based around the company’s crown jewel, the rollout of the new iPhone. Assuming it continues that process going forward, Apple has to make sure the software running these devices works efficiently and well with a minimum of disruption to users.

If you take a look at Apple’s balance sheets, “Services” are more important than ever, and will continue to be more important than ever to Apple in the future. The company can no longer count on explosive year-over-year hardware growth to buoy its fortunes. In fact, it already looks like we’re past peak smartphone sales in more and more regions around the world.

So it’s incumbent upon Apple to get the fit and finish of the software that runs its devices and the services which depend on that software to execute flawlessly, because that’s where the real money for Apple is – the income it gets year after year from the hundreds of millions of users of its products willing to spend even more to get more out of them.

Ghosted on Tinder is one thing, ghosted by Apple is another

My third item of note is an interesting tidbit about a fellow of some repute getting locked out of his Apple Developer account without any explanation from Apple – no explanation for months. I’m talking about the curious case of Guilherme “Gui” Rambo. Rambo, based in Brazil, isn’t your run-of-the-mill Apple developer.

Rambo been called a “spelunker” for his digital sleuthing. He looks inside the code of beta builds of macOS and iOS to find hints and indications of new products and services. He also uses his considerable deductive skills to uncover information on the web that companies like Apple would prefer to remain hidden, like the time he found web pages for new products by adapting URLs to the previous year’s releases. He’s scooped Apple and many Apple-focused web sites many times over the years and you’ll see his byline from time to time on 9to5Mac too.

In August Rambo found himself locked out of his developer account. Try as he might he couldn’t get access, and he couldn’t get an answer out of Apple. Calls to front-line developer relations reps were sent up the chain of command with promises that supervisory personnel would get back to him. But those calls went unanswered for months. By November he’d had enough and on the 20th, he posted his story to his own web site. Then it went viral. It got picked up and reposted on social media, and a number of Apple news sites picked up the story – us included (see the link above).

Rambo’s sleuthing work – and his ability to beat Apple to the punch with new product announcements – led some folks to assume that Apple suspended his developer credentials in retaliation. But Apple didn’t say a word to Rambo, so no one knows for sure why he got suspended. One thing was for sure – Apple ghosted Rambo, plain and simple, and that left a really bad taste in people’s mouths.

Rambo had been a developer in good standing right up until Apple nixed his credentials, then all of a sudden he wasn’t. He didn’t know who at Apple actually pulled his access, and he didn’t get a good explanation for why. There was no transparent accountability at Apple for what happened, and no remediation process, either. The whole thing came off as very capricious and petty.

This story does have a happy ending, however. Late in the week, Rambo announced via Twitter that his access has been reinstated. Apple hasn’t announced why and Rambo, for his part, is content to let sleeping dogs lie for now. But the public approbation over its decision clearly got Apple to move in the right direction on this.

Rambo was fortunate because he already had a well-established footprint in the space. His tweet and his blog post got notice – got notice from some very influential figures in the Apple blogosphere. I’m willing to bet that, more than anything, rose the temperature inside Apple enough for them to reverse their decision.

But his experience makes me wonder how many other developers this has happened to, who ended up just walking away from the platform altogether as a result. I hope the answer is very few. I would hope that Apple is above such petty, petulant, craven behavior.

And I hope that going forward, Apple is a lot more transparent when they do make these decisions. Ghosting developers isn’t a good look for Apple. I think it’s only reasonable to expect Apple – or any business with a modicum of professionalism – to treat its developers better than someone might treat a bad Tinder hookup.

That’s my editor’s desk roundup for this week. What big stories of the week caught your interest? Got thoughts to share? Sound off in the comments.