The Electra Team’s Chimera and Electra jailbreak tools have long utilized Substitute for native tweak injection, but it now seems that this could be on the verge of changing.

Electra Team lead developer CoolStar took to his jailbreak-oriented Discord channel on Thursday to share that his team would no longer maintain Substitute due to its incompatibility with certain jailbreak tweaks and hooking limitations: 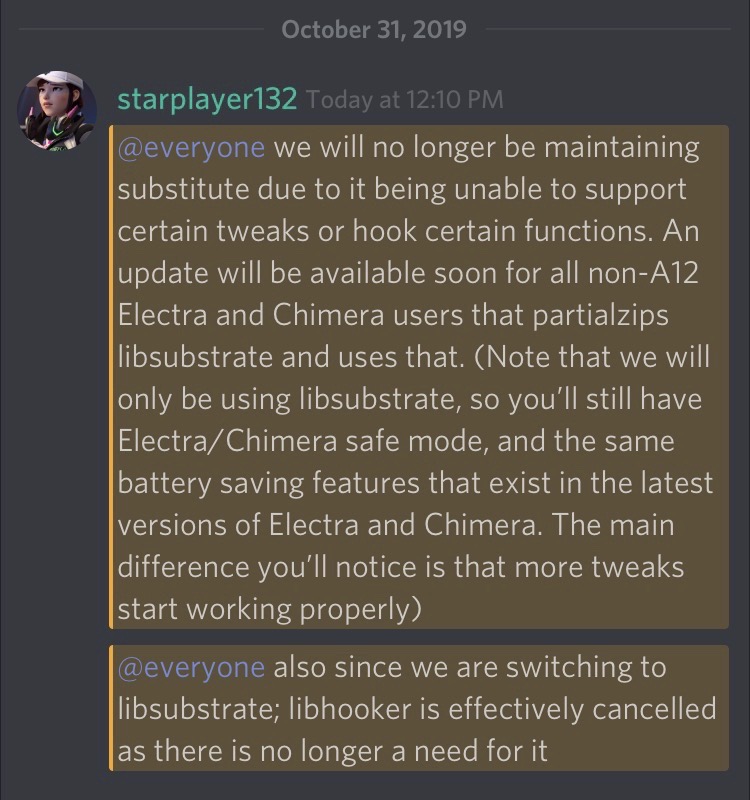 CoolStar went on to elucidate that the Chimera and Electra jailbreaks would soon receive an update for non-A12(X) handsets with support for libsubstrate instead. He also noted that this alteration wouldn’t hinder the existing Safe Mode mechanism on either jailbreak or impact battery performance in any way. If anything, users will see increased compatibility with jailbreak tweaks.

It’s particularly interesting to witness CoolStar taking this stance so late in the game, especially since the Electra Team has long advocated for Substitute. In fact, various members of the Electra Team have often claimed that Substitute was the most superior means of tweak injection (personal opinion redacted).

For what it’s worth, CoolStar recently suspended the development of Sileo, but later issued a small update with anonymous analytics collection to gauge just how many users the alternative package manager had and to accrue hardware and software statistics. CoolStar is purportedly using these statistics to determine whether maintaining Sileo is still worth the effort.

CoolStar also made it clear shortly after the release of the new checkm8 bootrom exploit that he had more interest in playing with the new exploit than adding support to Chimera for A12(X) devices running iOS 12.1.3 and later. The recent announcements insinuate that Chimera and Electra development could be devolving as CoolStar makes more time to play with checkm8 (though this is only speculation).

It should be noted that Pwn20wnd’s unc0ver jailbreak tool already supports A12(X) handsets running iOS 12.1.3 and later in the latest public beta, up to and including iOS 12.4. Those who’ve been waiting for Chimera to pick up support for these device and software combinations might want to consider using the former.

What are your thoughts about the recent announcements? Discuss in the comments section below.