Siri can optionally read texts out loud to you through your AirPods or Beats headphones as soon as they arrive, allowing for true hands-free messaging when your hands are busy. This feature is called Announce Notification (earlier called Announce Messages with Siri).

Being able to quickly listen and respond to an incoming message is no doubt an awesome enhancement. You aren’t required to double-tap or press an AirPod in order to summon Siri and ask her to read out loud the text you just received.

Follow along with iDownloadBlog’s step-by-step tutorial to learn how to set up Siri to have her automatically read incoming messages out loud.

Apple’s personal assistant can speak incoming notifications from messaging apps into your AirPods or Powerbeats Pro when you can’t reach for your phone. The feature doesn’t work on the original AirPods, but if you have a second-generation model or later, you’ll be fine.

Here’s the full list of headphones that support announce notifications with Siri:

Follow the steps below to have Siri automatically read your latest incoming message out loud.

1) Open Settings on your iPhone, iPad, or iPod touch.

4) Slide the switch next to Announce Notifications to the ON position and also enable the toggle for Headphones.

5) To avoid Siri reading your transcribed reply back to you before sending it, toggle off the option Reply Without Confirmation. If you’re not a native English speaker or Siri’s speech-to-text doesn’t impress you, you should leave this setting off in order to make sure Siri gets everything right. 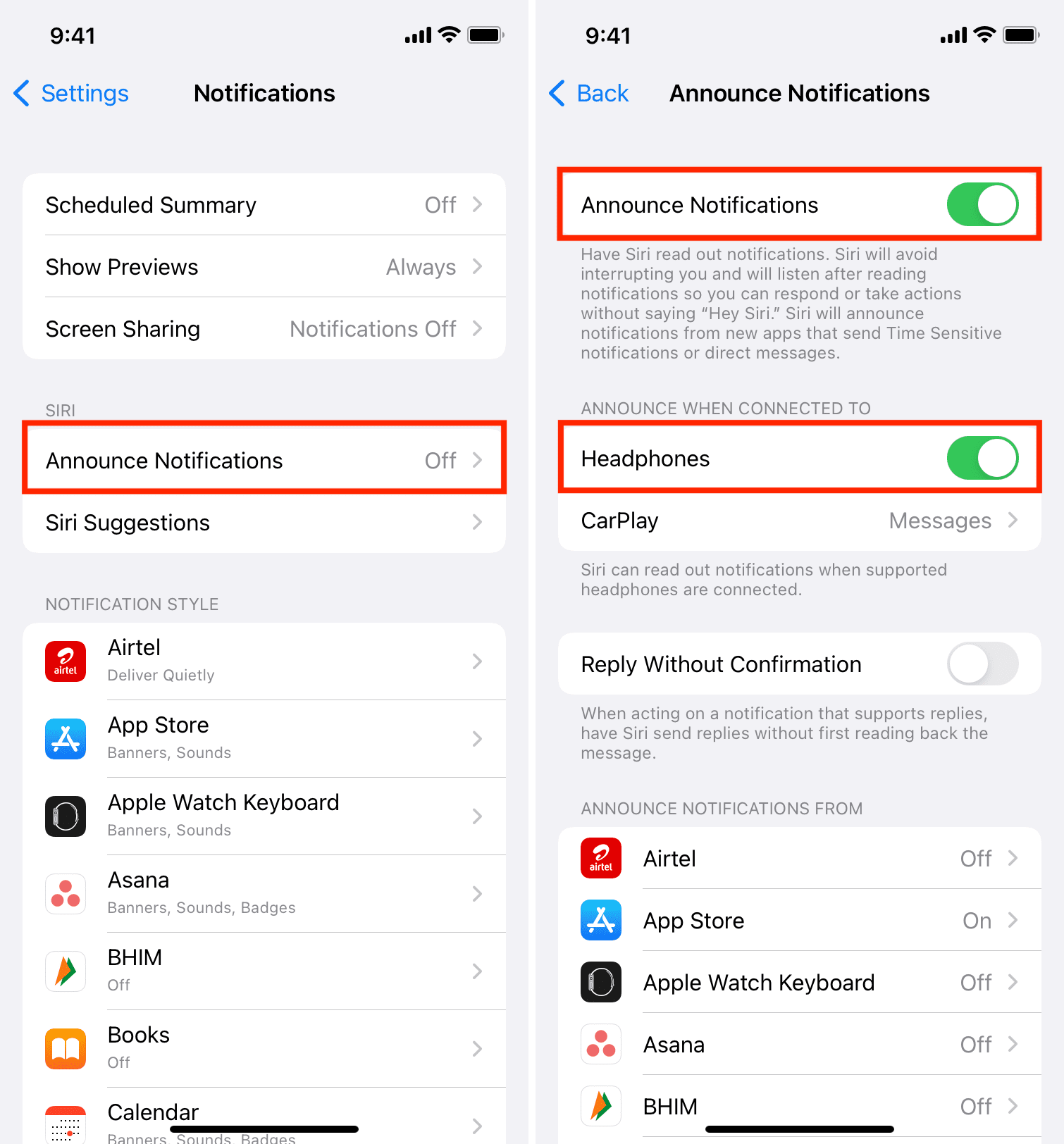 6) Now scroll down and tap Messages.

7) Choose whom you want to receive messages from this way: 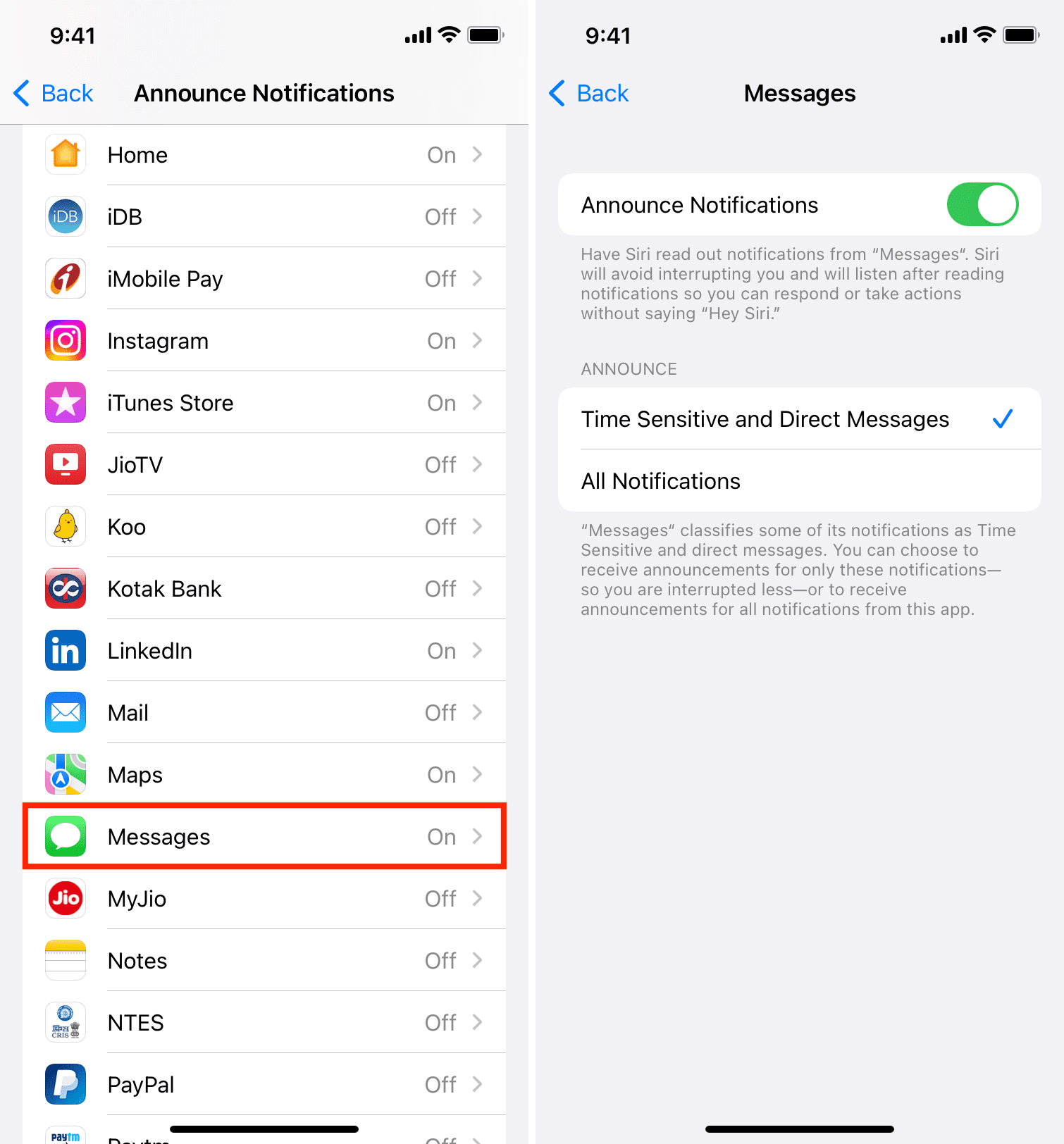 According to Apple, if notifications have been turned off for a particular messaging app, enabling Announce Messages with Siri will also turn back on notifications.

Aside from Messages, other apps like third-party messaging apps installed on your iPhone or iPad will be listed in Settings > Notifications > Announce Notifications, allowing you to separately manage this feature for every messaging app, which is pretty great.

How Announce Messages with Siri works

With the feature turned on, your trusted personal assistant will read an incoming message aloud, be it from Messages or from a third-party messaging app, as long as it integrates with the personal assistant using Apple’s SiriKit APIs.

Siri announces the sender before reading aloud the contents of their message into your ear. Right after reading the message out loud, Siri will then listen for a reply on your part. Simply tell them your message, no need to use the “Hey Siri” wake-up word before responding.

As an example, you may be running on a treadmill. Perhaps you’re playing with your kids, or your hands are simply busy. Regardless, now you can quickly and easily engage in a conversation even if you’re doing something else at the time.

By the way, Siri can also announce who’s calling. If you’re running iOS 13 or later, your iPhone can automatically silence unknown callers to cut down on the number of spammy robocalls and other unwanted calls.