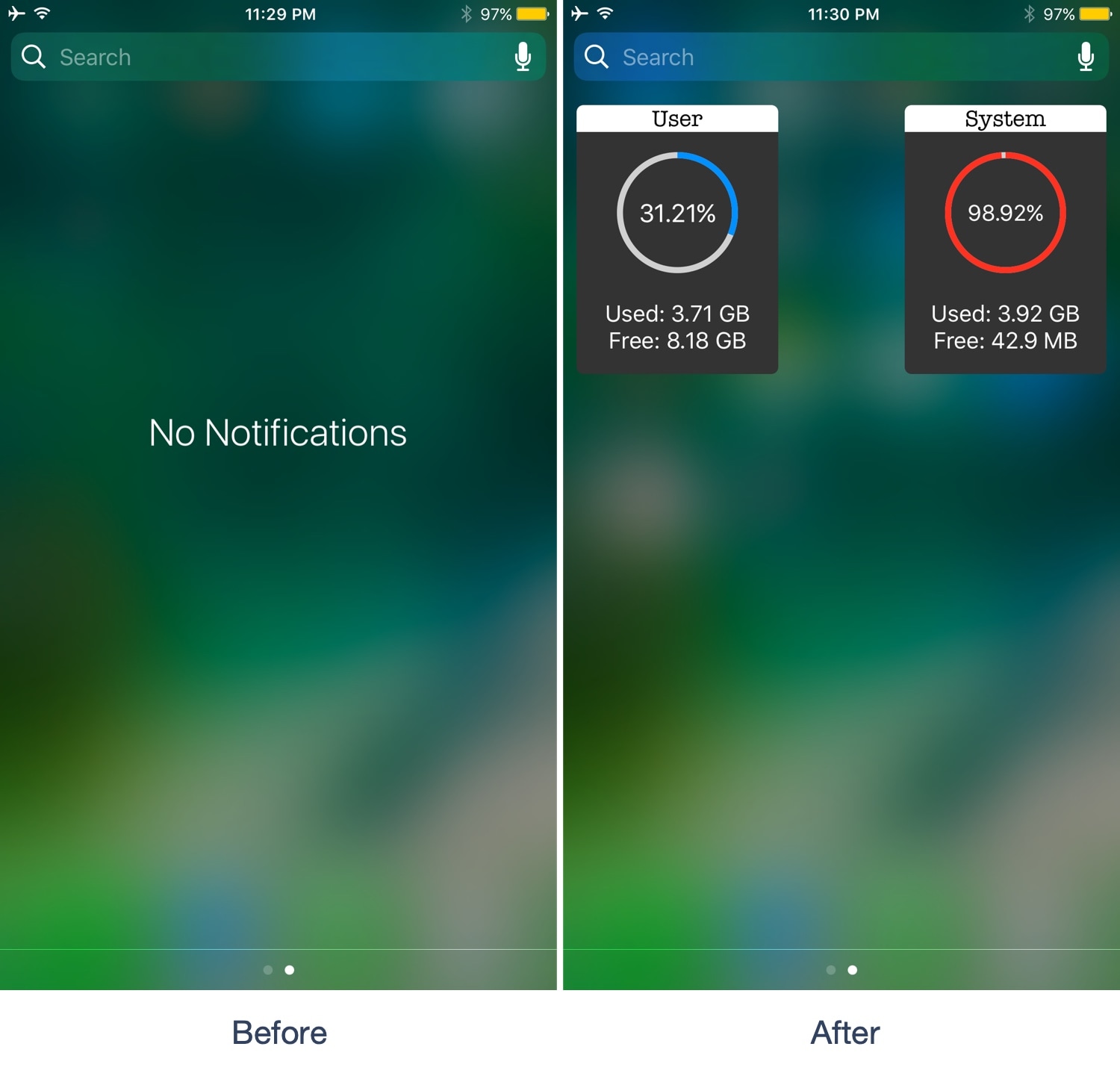 While most of the jailbreak community migrated to iOS 11 several months ago, those still rocking the iOS 10 jailbreak will be excited to learn of a new free jailbreak tweak in town called NCFancy by iOS developer Wh0ba.

NCFancy was explicitly designed for iOS 10 users, and as depicted in the screenshot example above, it replaces Notification Center’s useless ‘No Notifications’ text with something you might appreciate more – a pair of widgets that display your handset’s storage capacity usage.

If you’re wondering why there are two widgets displaying storage information instead of one, that’s because one of them presents your handset’s usable storage capacity while the other displays system storage capacity.

The difference between the two is that usable storage can be used for App Store downloads and data, while system storage describes a small partition set aside for system files, such as native apps and the device’s operating system itself.

The handset used to produce the screenshots above is a 16GB capacity iPhone 6 Plus, and if you add the two storage widgets together, you get 11.89GB (user) + 3.96GB (system), which equals about 15.85GB. That’s approximately what we’d expect from a 16GB device, which indicates that the data being displayed in the widgets are accurate.

Notably, displaying storage information is the only thing that NCFancy can do at the time of this writing. The developer appears to use a specific wording in the tweak’s Cydia description that implies how a future update could bring supplemental features at some point. Obviously, we’ll need to wait and see to know for sure.

NCFancy doesn’t come with any options to configure, so what you see is what you get after installing the tweak. If you have a jailbroken iOS 10 device and want to give the tweak a try, then you can download it for free via the Wh0ba repository in Cydia.

If you aren’t already using the Wh0ba repository, then you can follow our step-by-step tutorial to add it to Cydia. The repository URL is as follows:

NCFancy is a blast from the past, but we’ll share more iOS 11-centric jailbreak tweaks with you as they surface. In the meantime, do you think NCFancy is an improvement to the native iOS 10 Notification Center interface? Let us know in the comments section below.