Apple first released iOS 12 in mid-September, and it’s seen a host of revisions over the last four months. Despite the continuous fortification of Apple’s mobile operating system, there’s been no shortage of bug and exploit reports encompassing iOS 12.

One of the latest announcements comes by way of security researcher @S0rryMybad, who appears to have happened upon a powerful exploit impacting iOS 12.1.2 and below on pre-A12 devices. But perhaps more importantly, the exploit can allegedly provide tfp0 on Apple’s latest mobile operating system: 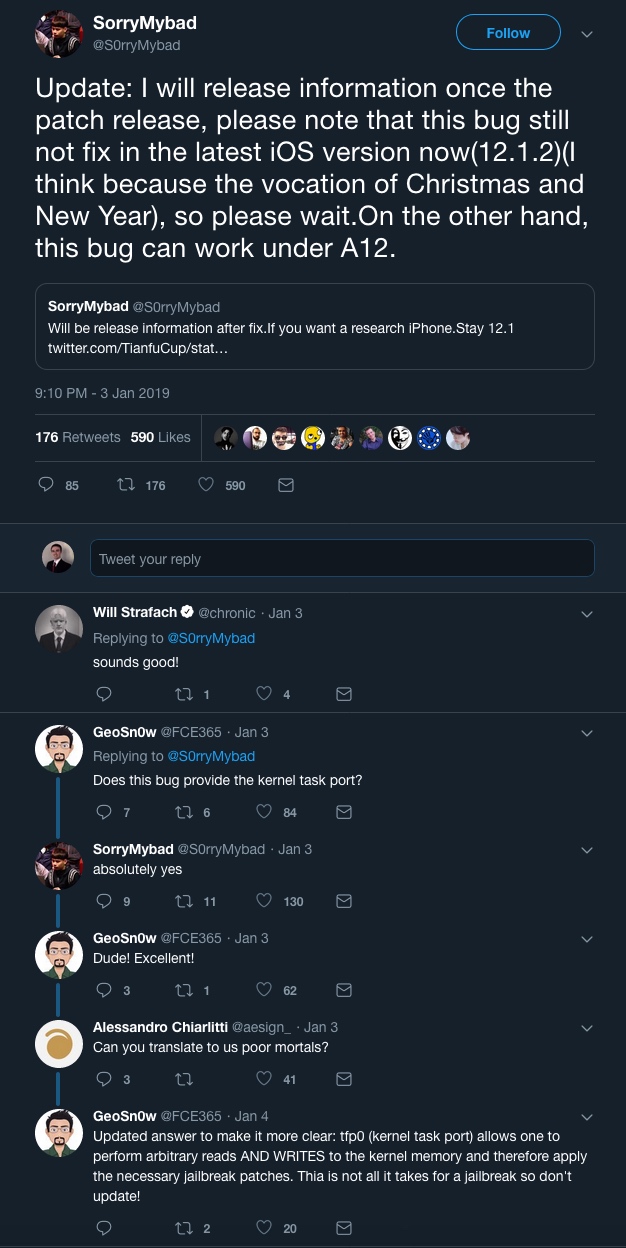 In case you’re unfamiliar with tfp0, it’s mostly a kernel task port that permits arbitrary reads and writes to a handset’s kernel memory, and this helps make jailbreaks possible. As you might recall, the exploit Ian Beer released that facilitated the iOS 11 jailbreak was of the tfp0 variety.

As it would seem, @S0rryMybad has notified Apple about the bug and is now waiting for the Cupertino-based tech company to patch it before he releases it into the wild. Delays for the said patch are expected given how the exploit’s announcement coincided with the recent holiday season.

Modern jailbreaks such as Electra and unc0ver only encompass support for iOS 11.0-11.4 beta 3, so it’s particularly exciting that a powerful exploit such as this could potentially change that. On the other hand, an exploit is only part of the battle; jailbreak developers must also navigate through iOS 12’s new jailbreak protections and then create a user-friendly jailbreak tool for users to download and deploy.

Another vital tidbit that shouldn’t be forgotten is the importance of staying on the lowest firmware possible. Jailbreaks often require more than one bug, and Apple’s patches in each software update make them that much tougher to support in a jailbreak tool. Given the circumstances, hacker and unc0ver lead developer Pwn20wnd reminds us again to stay on the lowest firmware possible: 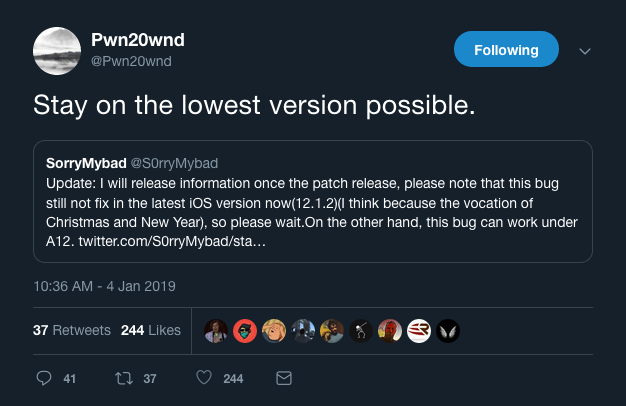 Pwn20wnd’s Tweet above is not a promise to work on an iOS 12 jailbreak when the exploit is dropped, but instead some wise advice for the jailbreak community. At the time of this writing, there’s no word on when Apple will release a software update for its iPhone and iPad lineup to address @S0rryMybad’s exploit, but it seems we’re stuck waiting until Apple makes a move to find out.

Whether or not an iOS 12 jailbreak will materialize because of @S0rryMybad’s exploit remains to be seen, but we wouldn’t recommend updating from iOS 11 if you’re already jailbroken. Instead, the news should serve as a glimmer of hope for those on iOS 12 that might be waiting for a jailbreak to surface.

Are you excited to learn that another iOS 12 exploit could soon be released? Discuss your thoughts in the comments section below.