Pwn20wnd has been rather busy these last few weeks updating unc0ver with bug fixes and new features, but much like a machine, the hacker continues to polish the iOS 11-centric jailbreak tool with no signs of slowing down anytime soon.

Over the weekend, Pwn20wnd shared via Twitter the unc0ver v2.1.0 pre-release for public testing, further refining the jailbreak experience with improvements and bug fixes: 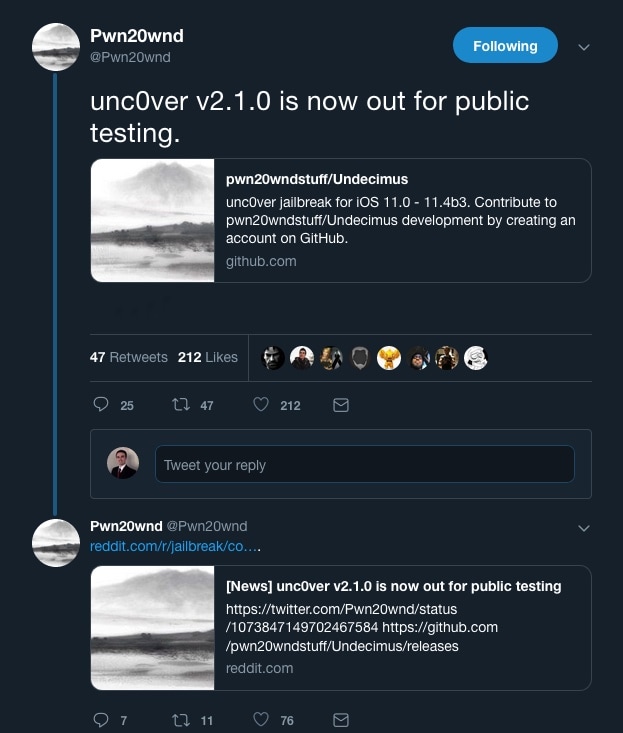 Furthermore, a secondary build of the unc0ver v2.1.0 pre-release was issued not long after the initial build, adding the following changes:

As of this writing, unc0ver v2.0.2 continues to be the latest stable version of the jailbreak tool. The unc0ver v2.1.0 pre-release is available on Pwn20wnd’s GitHub page for anyone who wants to try it, but it should be treated as a beta and is only recommended for advanced users. Everyone else should wait for the official release in coming days for stability reasons.

Unc0ver is a semi-tethered jailbreak just like Electra, which means you need to re-run the tool after every reboot. That aside, it bundles a newer Saurik-approved version of Cydia that runs better on iOS 11 right out of the box.

Are you excited about the changes in the unc0ver v2.1.0 pre-release? Let us know in the comments section below.