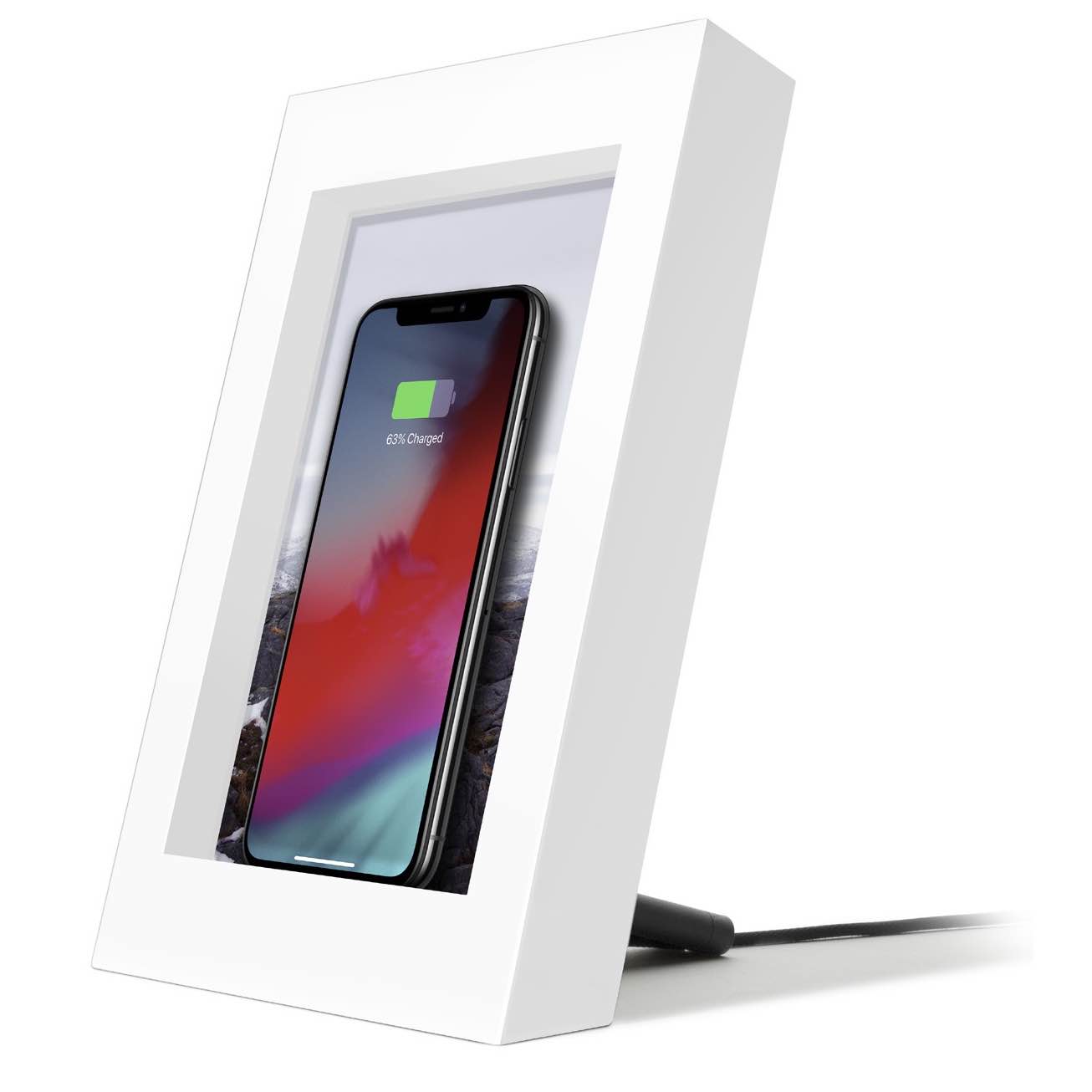 You just arrived home after a long day and your iPhone could use some recharging. And when a guy needs some juice, what better way to juice up your iPhone than drop it on an elegant picture frame that’s sitting on the table? That’s right, Twelve South has created an amazing gadget that looks and behaves like a regular 5×7 picture frame but also happens to wirelessly charge your phone quickly because there’s a 10-watt Qi charger hidden inside the frame.

A picture frame with a secret

This has got to be one of the most unusual gadgets I’ve seen in, well, quite a while.

Twelve South is a well-known name in the premium accessory market. They have been making some of the best cases, stands, chargers and other gadgets for your Apple devices. 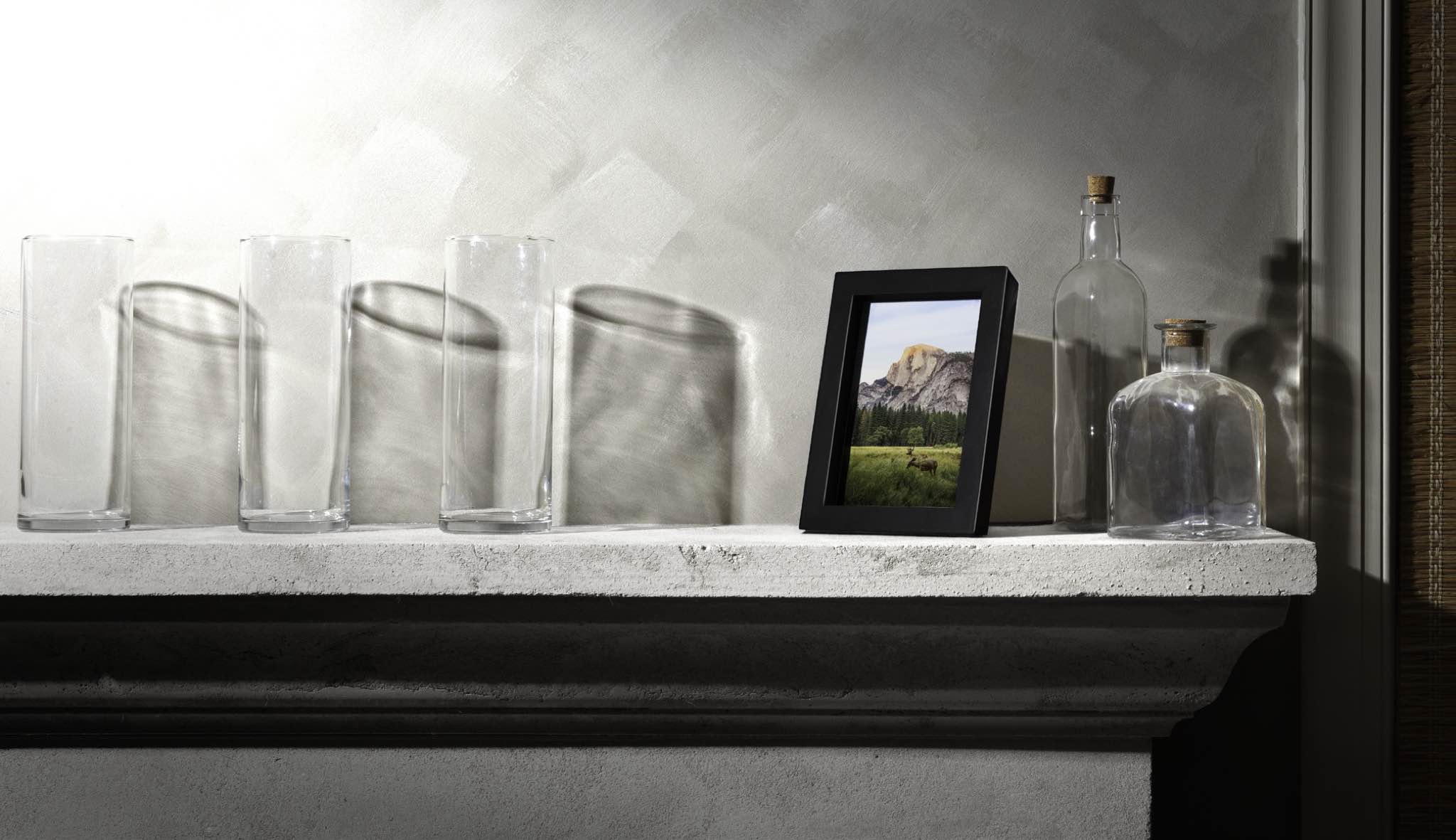 They’re calling this thing PowerPic and it’s being advertised as “a picture perfect way to wirelessly charge your phone.” As we mentioned, it’s a regular picture frame that doubles as a Qi-compatible wireless charger that supports fast charging at up to 10 watts of power.

The thing looks perfectly natural in your home or office. The contemporary frame is made of New Zealand Pine and holds any standard 5×7 photo. When you need some juice, drop your Qi-enabled phone on the 17mm inner lip of the frame and it instantly starts charging. 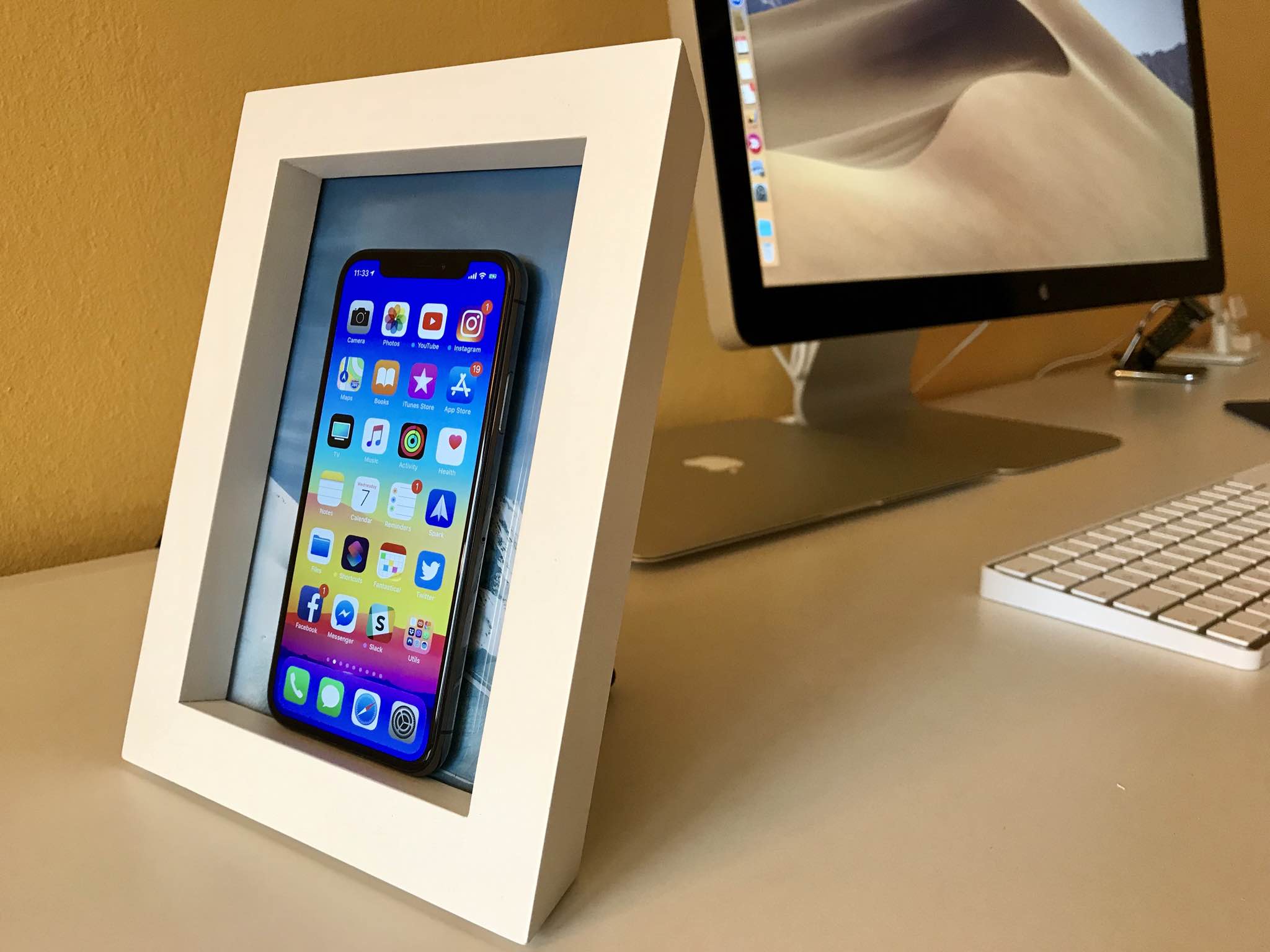 Say, what’s your phone doing on that picture frame?

It ships with a frame photo, but you can print and use your own 5×7 favorite photo. Twelve South even made special iPhone backgrounds to “complete” the stock image.

My PowerPic arrived in Twelve South’s usual packaging that included the device itself, the printed manual, a Twelve South sticker and some additional frame images. If you ever bought a Twelve South product, you have a good idea of how their products are packaged and shipped. 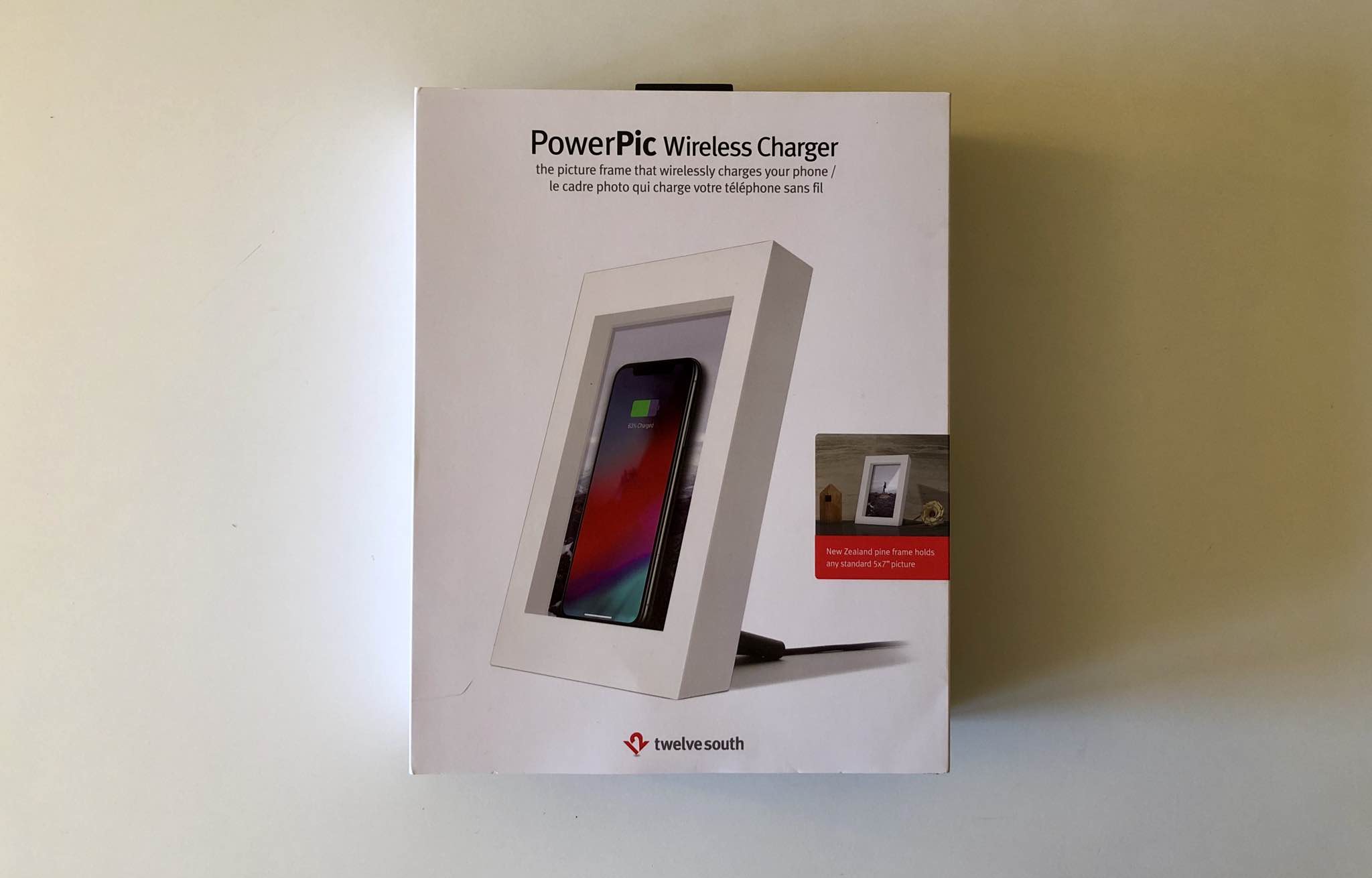 Twelve South has gone experimental with this unusual charger

The contemporary frame is made of New Zealand Pine and holds any 5” x 7” photo. To get started with PowerPic, insert the included support arm into the back of the frame. The support arm doubles as a cable management of sorts so you don’t see much of the power cable. 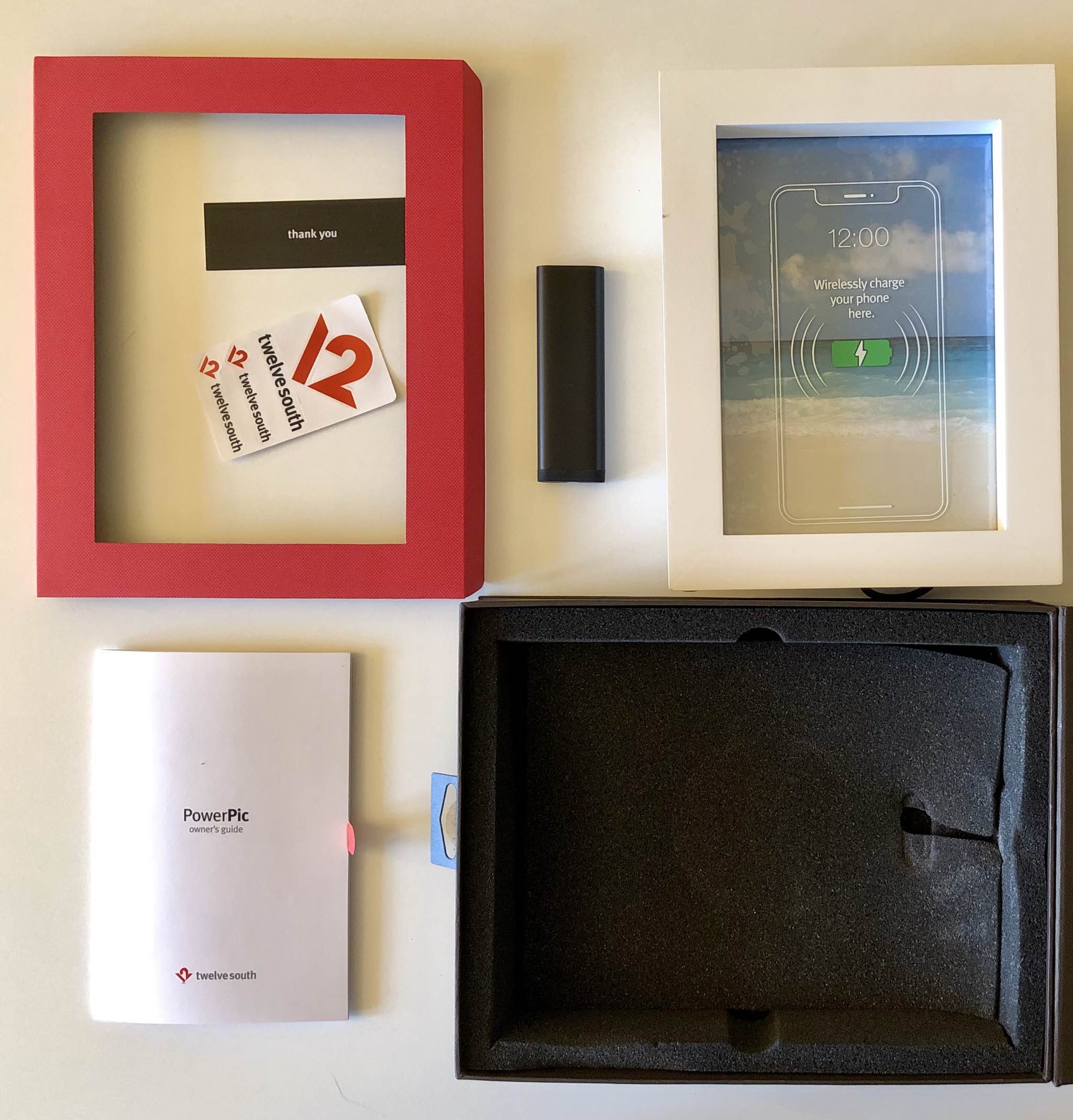 This is what arrived in my PowerPic box

Plug the USB-C side of the power cable into the rear port of your PowerPic accessory and the USB Type A side into your notebook, monitor or a USB phone charger and you’re good to go. Simply place your iPhone against the picture frame to begin charging. 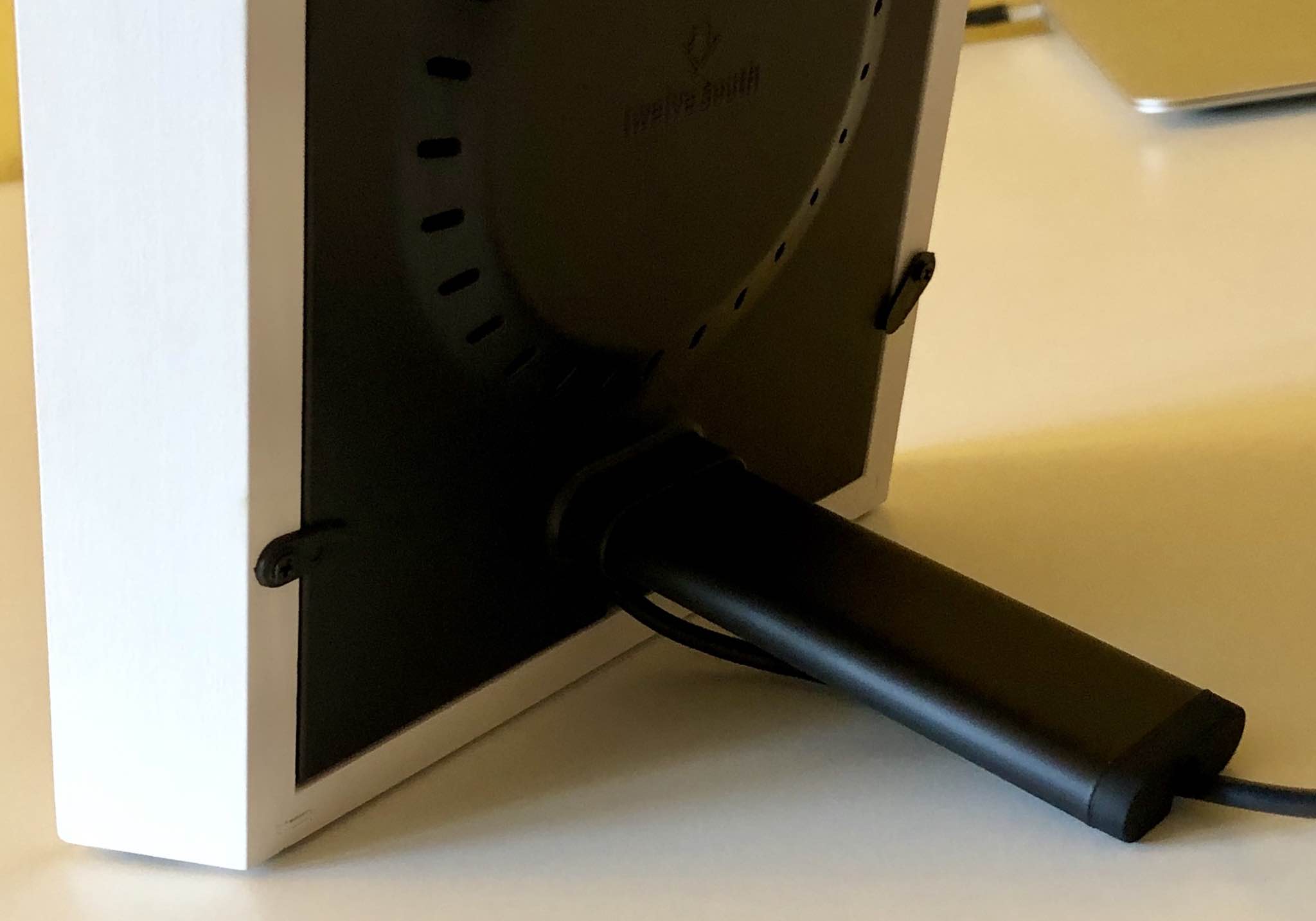 As an added bonus, Twelve South is offering some free downloads of iPhone backgrounds that match the frame photographs, creating a seamless look between your iPhone’s Lock screen wallpaper and the frame photo to “complete” the image. 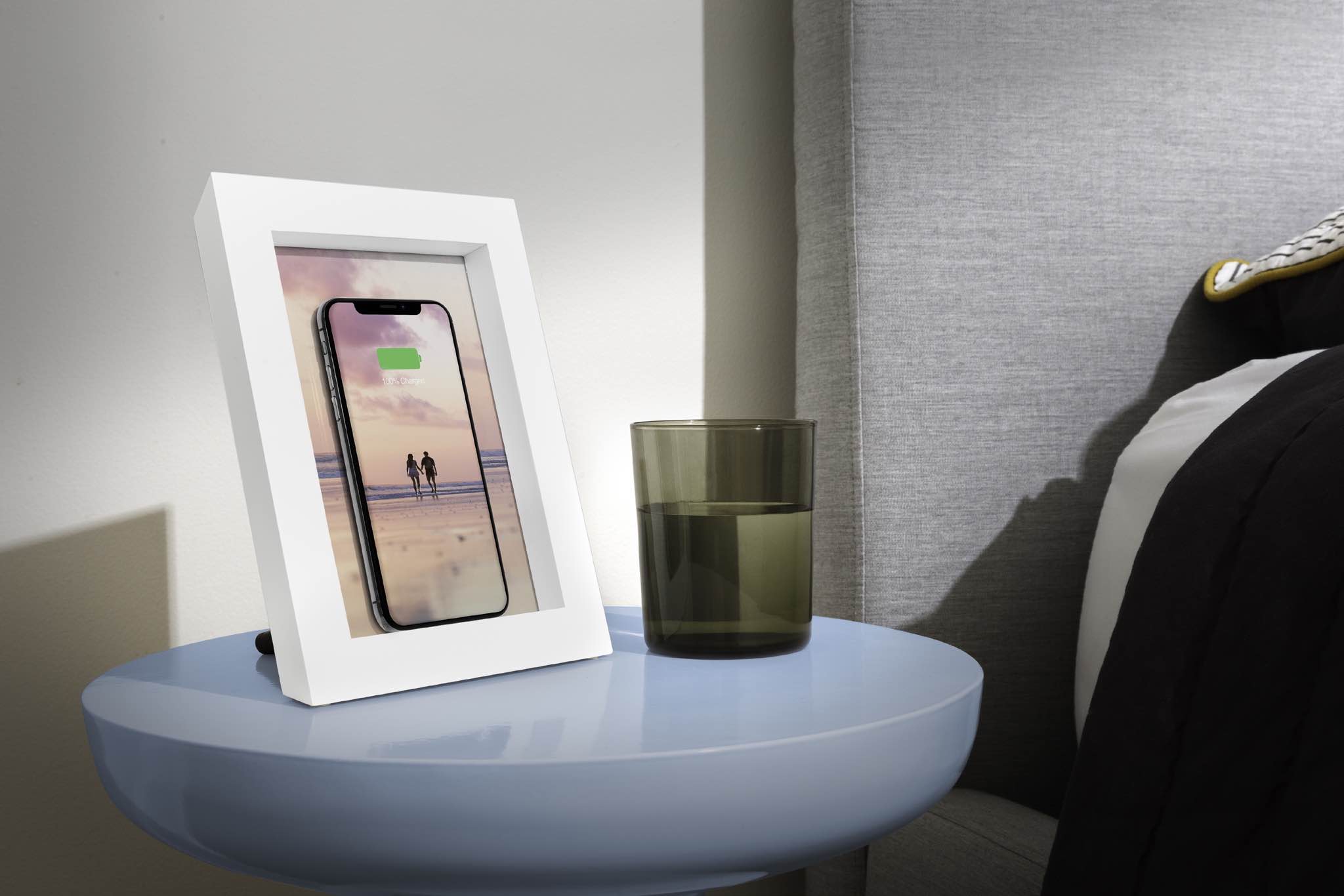 After downloading the free backgrounds, choose a wallpaper that matches your frame photo. 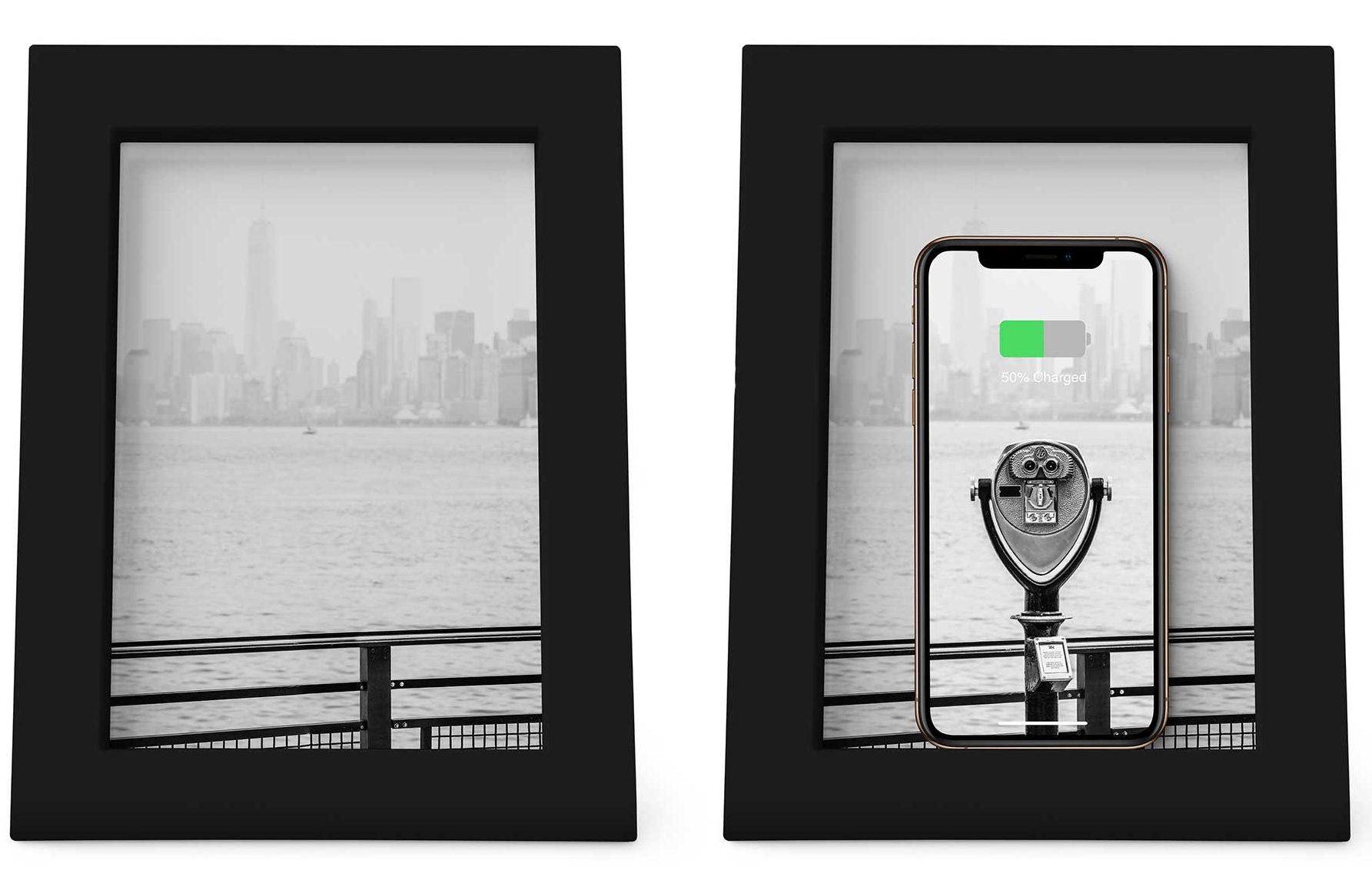 To line up the wallpaper perfectly, just pinch in the screen once the wallpaper is shown in the preferences to allow the full image to be seen, as demonstrated by a screen capture below.

Adding a personal photo to the frame couldn’t be easier. 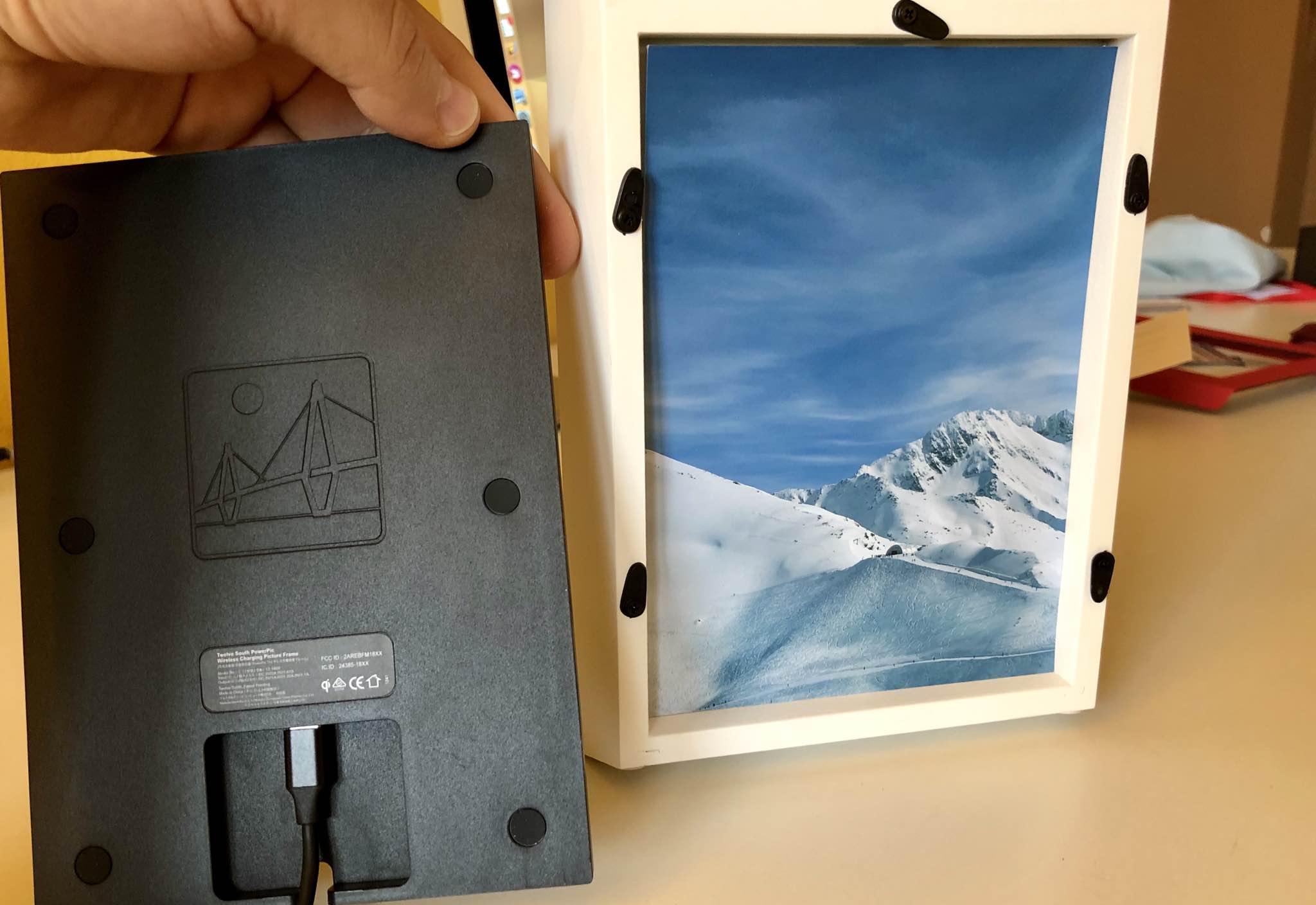 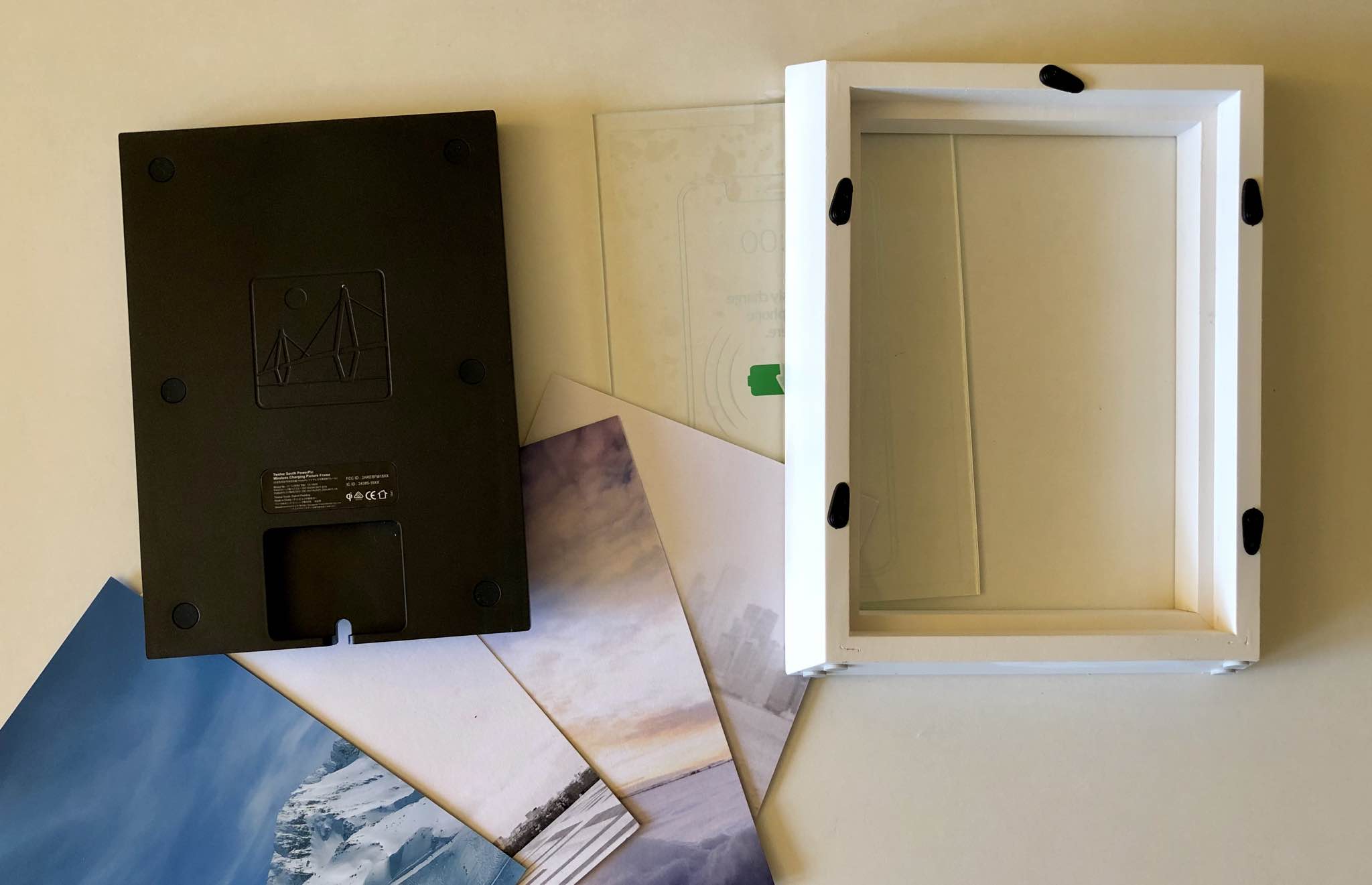 PowerPic has a handy status light on its back.

With just a glance, you get to know the charging status of your device. Blue light indicates the phone is charging, green light denotes the device is fully charged and blinking blue light means that a foreign object was detected against the frame. 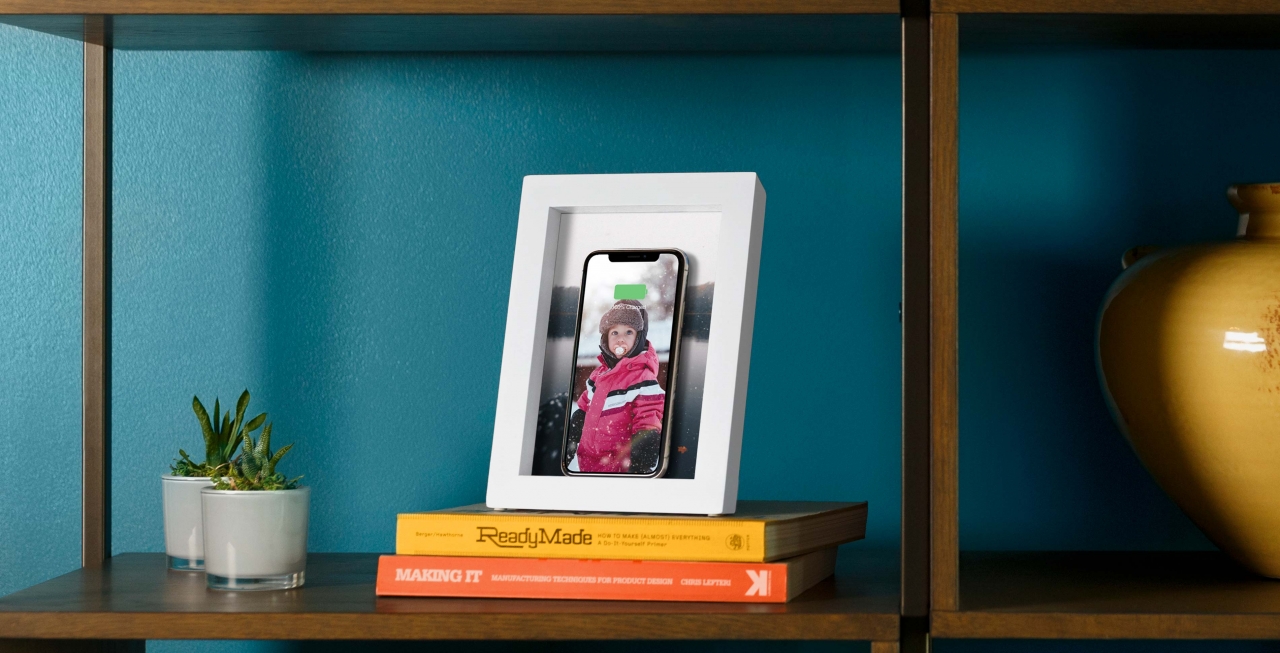 Avoid putting foreign objects like metallic cards or magnets between your phone and PowerPic as doing so could affect charging. This is important because emitting unnecessary powering heat could damage the phone, cause overheating or interfere with charging.

My only gripe with the status light is its location—being on the back makes it easy to forget it’s there, defeating its purpose. I asked Twelve South why PowerPic doesn’t ship with its own charger and was told that they’ll soon sell a new $9.99 USB block as a compatible accessory. 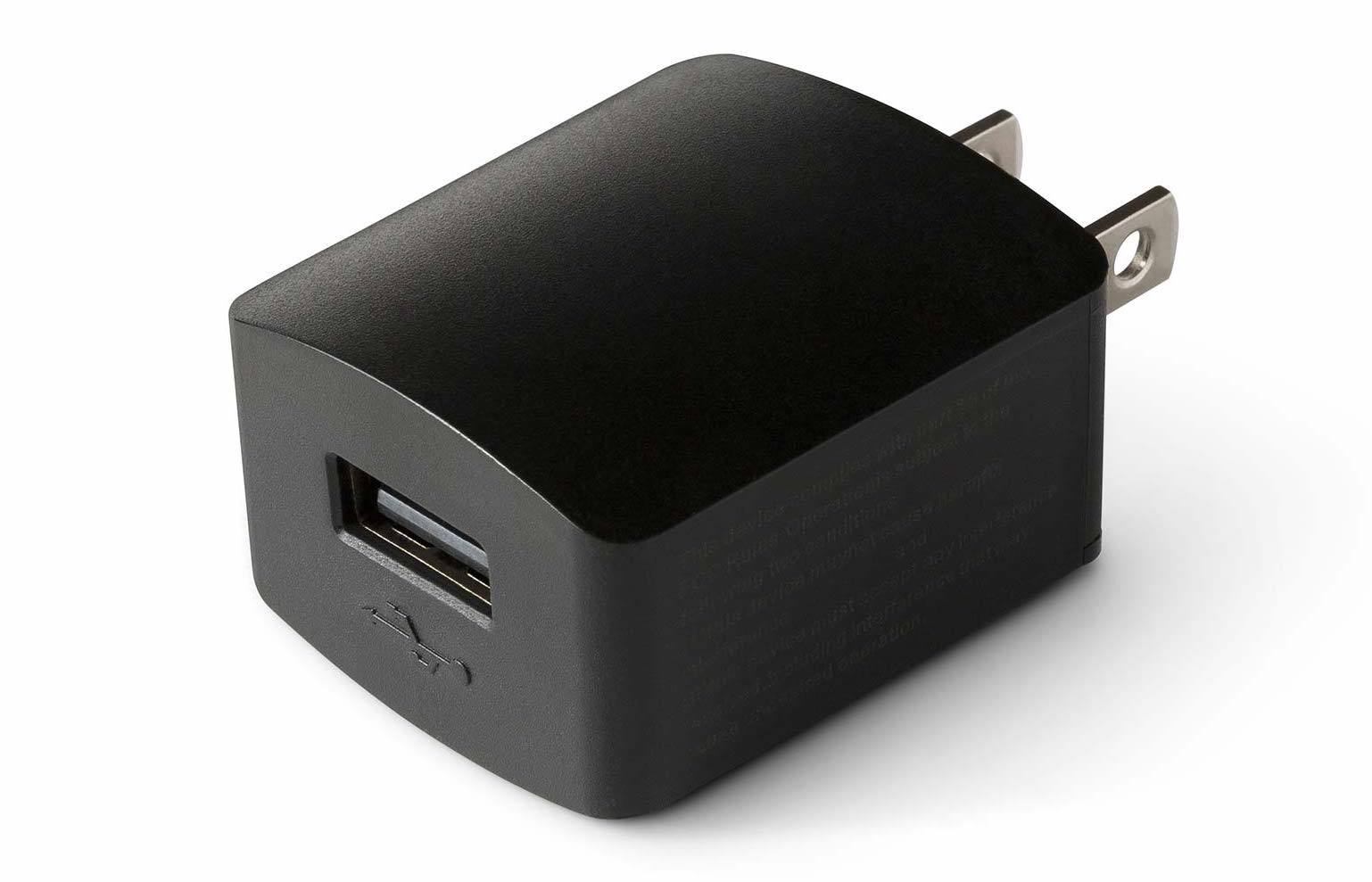 It goes without saying that you won’t be plugging your PowerPic to your iPhone charger (5W) or older USB ports because you’re going to need a 10W source of power to make the most from fast 10W wireless charging.

Twelve South says PowerPic is “the best looking wireless phone charger that you’ll never see” and the description is on point. This is a unique accessory, there’s no question about it. I could be wrong, but I don’t think I’ve ever seen a wireless charger disguised as a picture frame.

Most wireless chargers are single-function devices that look like pucks or vertical stands without offering additional functionality. I didn’t think this would be a thing, but I’ll be first to admit that having an elegant picture frame that sports a hidden wireless charger behind your favorite photo is innovative and functional, not gimmicky. 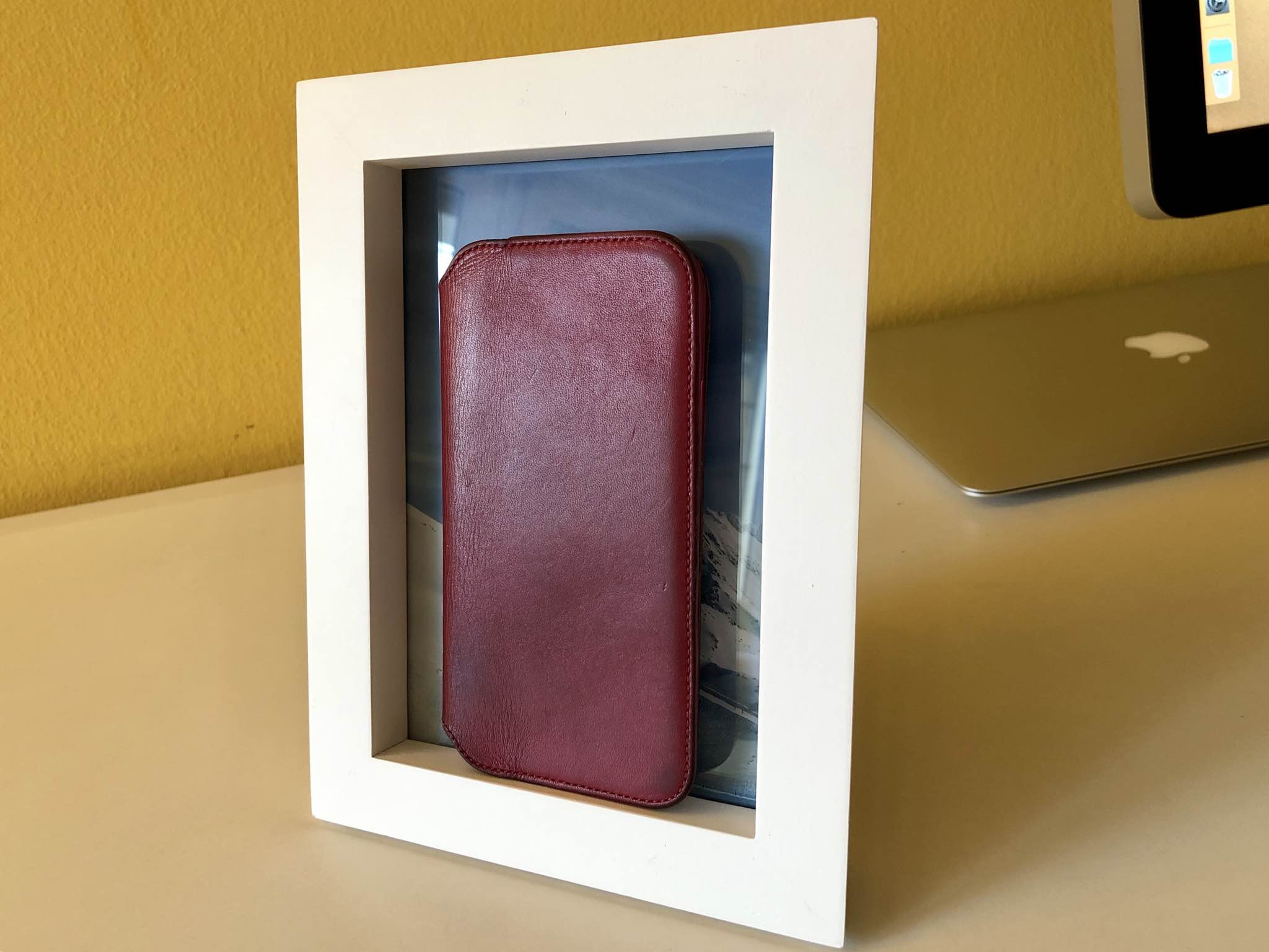 PowerPic even works with phone cases up to 3mm thick

Everyone who saw this at my home was taken aback, positively. You should have seen the look on people’s faces when I rested my phone against cover glass and it immediately sounded a chime and began charging. And if the charging plate ever breaks or stops working, you can continue using the picture frame as, well, a picture frame.

In fact, the user manual proposes 12 cool ways to reuse your PowerPic box! 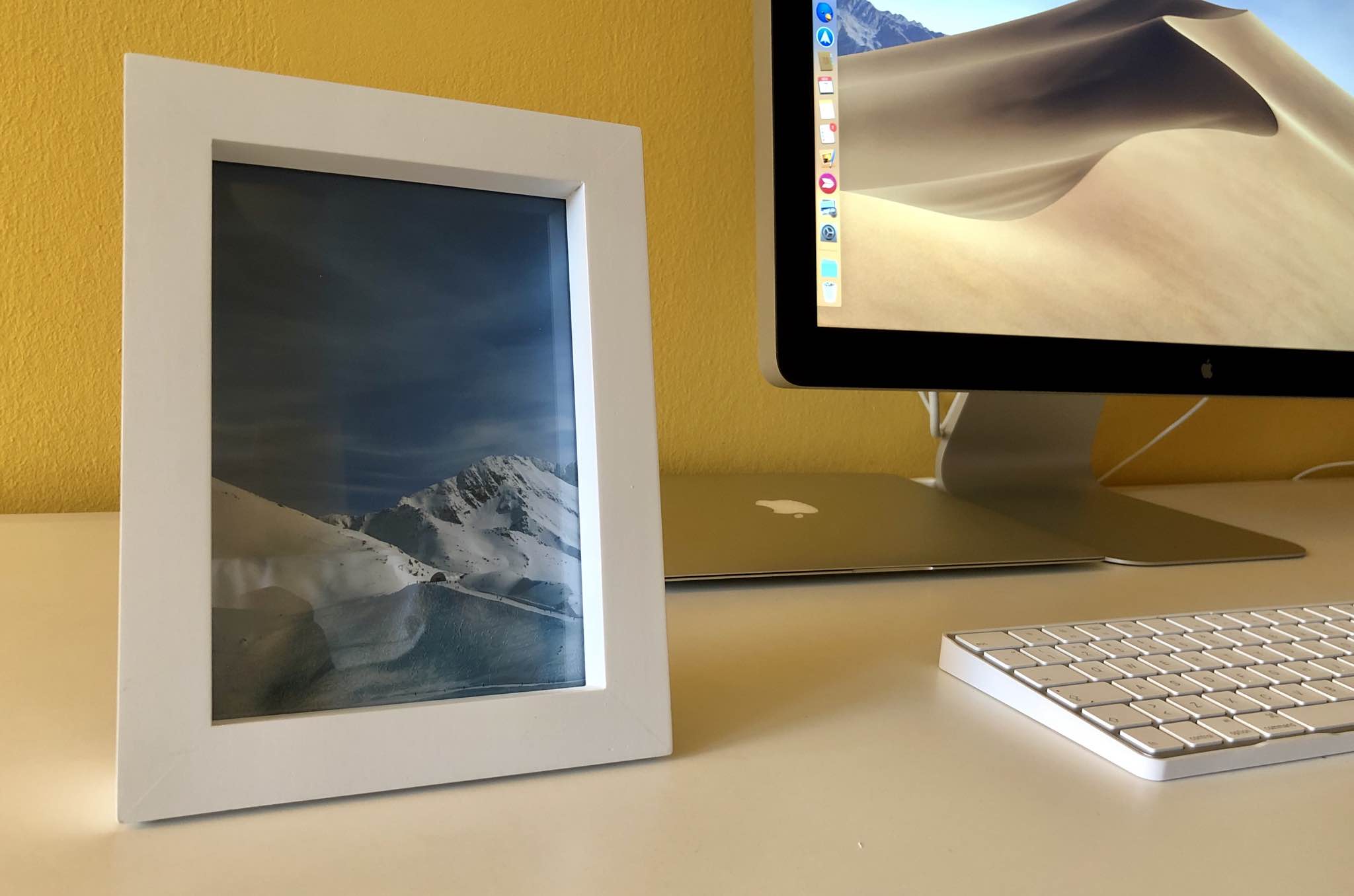 Again, this is a regular Qi charger supporting up to 10 watts of power that works not only with iPhone X, iPhone XS, iPhone XS Max and iPhone XR but with any Qi-enabled phone.

Twelve South told me they’ll be refreshing downloadable backgrounds with special holiday options. Man, this is gonna be a popular gadget to pick up this holiday season!

Here’s what I liked and disliked about this unique wireless charging dock.

PowerPic is available in Black or White to match any decor, home or office style.

It’s offered at an introductory price of $79.99 through the holiday season. After that, PowerPic will retail at $89.99. You can purchase yours through the Twelve South webstore starting today.