Pwn20wnd’s unc0ver jailbreak tool for iOS 11.0-11.4 beta 3 received a notable update on Sunday with improved success rates for both the Empty_List (VFS) and Multi_Path (MPTCP) exploits that it utilizes to pwn Apple handsets.

Pwn20wnd announced the updated version of unc0ver via his Twitter account, which came just hours after unc0ver V1.1.1: 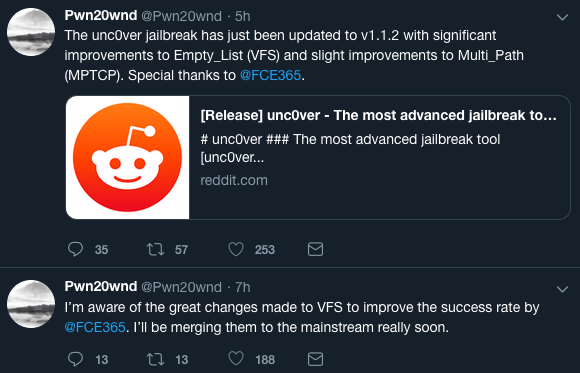 The unc0ver jailbreak’s success rate, namely the VFS-based exploit, has left a lot to be desired since the tool’s initial release; some users were compelled to re-attempt the jailbreak process for almost an hour straight until a successful jailbreak would be achieved.

As we learn from the series of Tweets by Pwn20wnd, credit goes to @FCE365 for improving the exploits’ success rates. Ideally, the optimizations should reduce the number of jailbreak attempts needed to achieve a functioning jailbreak with unc0ver.

As usual, Pwn20wnd updated the official /r/jailbreak post about the new V1.1.2 release, citing how it incorporates the following changes:

If you’ve been having issues with a previous version of unc0ver, namely with trying to jailbreak or re-enter a jailbroken state, then unc0ver V1.1.2 should quickly become your best friend. All users are advised to download unc0ver V1.1.2 from Pwn20wnd’s official GitHub repository at their earliest convenience so that they can enjoy the latest improvements.

Has unc0ver V1.1.2 made it easier for you to jailbreak your iOS 11 handset? Let us know in the comments section below.