It was only yesterday that Pwn20wnd’s unc0ver jailbreak for iOS 11.0-11.4 beta 3 was officially brought out of its beta stages, but the tool has since received its first update following the release of V1.

Sunday’s update, dubbed unc0ver V1.0.1, aims to prevent known problems with the RootFS Restore feature on iOS 11.0-11.1.2 handsets. As it would seem, it was implemented in an unsafe manner that compelled some users to restore via iTunes and lose their jailbreak.

In a Tweet shared by Pwn20wnd after the release of unc0ver V1.0.1, we learn that the RootFS Restore feature has been disabled on handsets running iOS 11.0-11.2.6 until further notice: 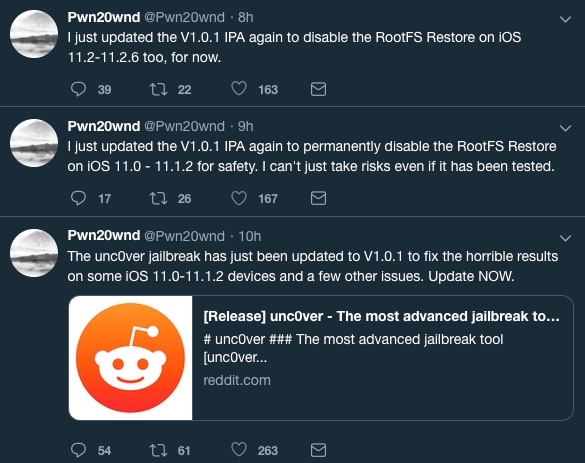 Unfortunately, we don’t know when the RootFS Restore feature will be fixed. That said, anyone that is running unc0ver V1 or earlier is now being advised to avoid using the RootFS Restore option and download unc0ver V1.0.1 from Pwn20wnd’s GitHub repository as soon as possible to prevent inadvertent mishaps down the road.

Have you had any issues with RootFS Restore feature since jailbreaking with unc0ver? Share your experiences in the comments section below.