About a month ago, renowned security researcher Ian Beer announced plans to publicly release iOS 11.4-11.4.1-centric exploits as hacking focus shifted over to Apple’s newer iOS 12 release. It’s been near-radio silence since then, but as of today, those exploits are officially public.

As it would seem, Beer’s latest batch of iOS security exploits encompass the following:

Citing Twitter user Jake James, an iOS jailbreak tweak developer, these exploits are merely proof of concepts and have not been released with instruction manuals detailing how to use them to jailbreak iOS 11.4-11.4.1. Furthermore, they don’t grant root access, which is necessary for a properly-functioning jailbreak. 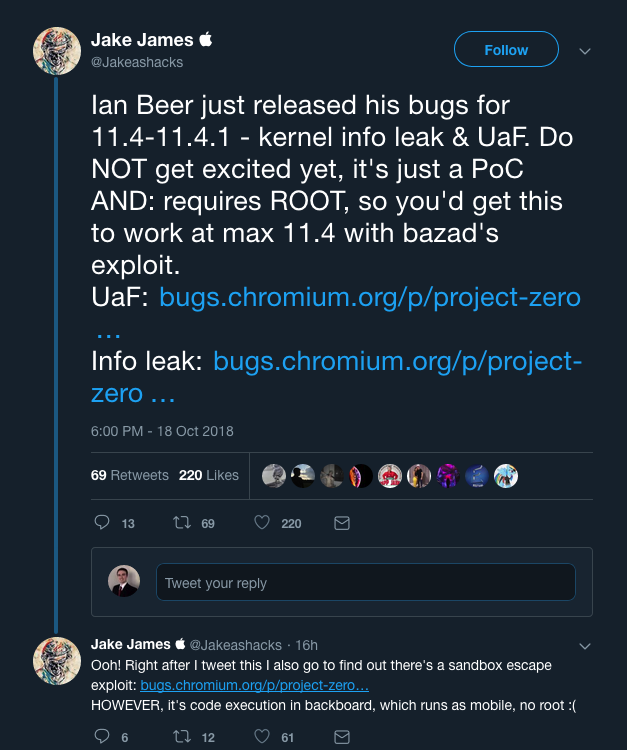 As it would seem, it could be possible for a talented jailbreak developer to make use of a particular exploit from bazad to produce an iOS 11.4 jailbreak, but this method wouldn’t encompass iOS 11.4.1, which Apple originally released to fix additional security holes and bugs right before launching iOS 12.

As of now, Electra and unc0ver are the two primary jailbreak options for iOS 11. Among the two, the latter is the latest, but no public jailbreak available today works beyond iOS 11.4 beta 3. These exploits have the potential to change that, so we’ll need to wait and see what happens.

Are you happy to see Beer’s exploits finally released to the public? Share your opinions in the comments below.