Security researcher Ian Beer has become somewhat of a legend in the jailbreak community recently. Albeit not directly related to the development of recent iOS 11 jailbreak tools like Electra, his mighty iOS exploits helped make them possible.

Despite all the contributions Beer has made thus far, he doesn’t appear to be slowing down one bit. Beer announced Wednesday morning via Twitter that he’d be releasing some new iOS 11.4.1-centric exploits. 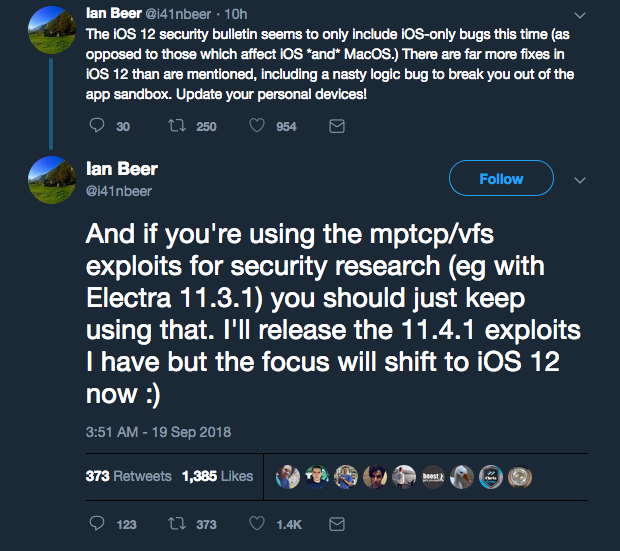 Beer didn’t divulge much about his iOS 11.4.1-centric exploits in the Tweets, leaving tons of wiggle room for interpretation. As of this writing, there’s no telling what the exploits might encompass and whether they’ll contribute to another jailbreak tool before prominent hackers begin pecking away at iOS 12 in search of vulnerabilities.

Speaking of iOS 12, this appears to be Beer’s new point of interest. After releasing his iOS 11.4.1 exploits, Beer will prioritize iOS 12 exploitation efforts, leaving his previous work in the hands of the jailbreak community. From then on, it would be up to the talented jailbreak teams such as the Electra Team to make magic happen.

One thing we do learn from Beer’s Tweets is that iOS 12 secures Apple’s mobile operating system in more ways than the company publicly admits; this could make jailbreaking iOS 12 more challenging going forward, as previously-valid exploits no longer work as of this update.

Despite the challenges ahead, this hasn’t stopped hackers from finding ways around Apple’s latest security measures. Just one day after iOS 12’s launch, researchers with Ali Security demoed a fully-untethered jailbreak for it. While the tool’s release is unlikely, it proves that no piece of software is hack-proof.

Are you excited to see whether Ian Beer’s iOS 11.4.1 exploits materialize into anything special? Share your thoughts in the comments section below.