It was just yesterday that iOS hacker Pwn20wnd released unc0ver RC7 with essential bug fixes and improvements encompassing the RootFS Restore on iOS 11.2-11.2.6 and the MP exploit clean-up method, but as of Thursday afternoon, he’s at it again.

Pwn20wnd has just released unc0ver RC8 with a slew of other critical bug fixes and improvements, and all users are advised to download and run the latest version when they can. 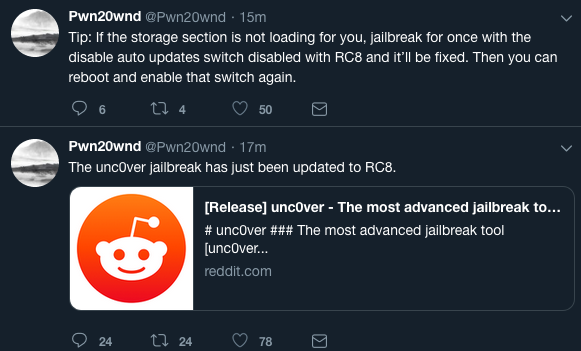 For those unaware, unc0ver supports all iOS 11.0-11.4 beta 3 devices. It’s a semi-untethered jailbreak just like Electra, which means you need to re-run the tool after every reboot; but it sports a newer Saurik-approved version of the Cydia Store that runs smoother and looks better on iOS 11.

Those using an older version of unc0ver should download RC8 immediately from Pwn20wnd’s official GitHub repository so they can take advantage of the latest improvements and optimizations. If you’ve never used unc0ver before, and plan to do so now, then you can follow our in-depth tutorial about how to install and run the unc0ver jailbreak.

Has unc0ver RC8 fixed all the issues you’ve been running into with the new jailbreak? Share in the comments section below.