If you’ve been paying attention to the jailbreak community lately, then you’ve probably caught wind of a new iOS 11-centric jailbreak tool dubbed unc0ver by Pwn20wned.

Unc0ver has been gaining traction in the jailbreak community all week long, and Pwn20wnd just released unc0ver RC7 on Wednesday with important bug fixes and stability improvements. 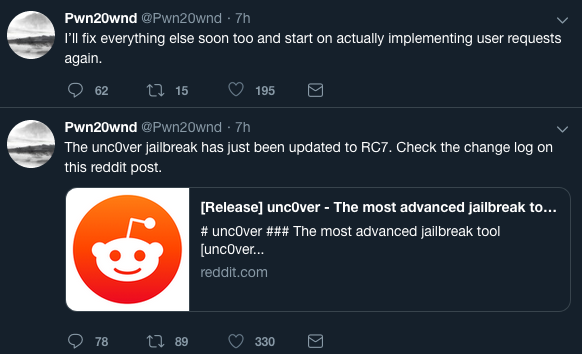 Citing the official /r/jailbreak post by Pwn20wned, we learn that the unc0ver RC7 release fixes a problem with the RootFS Restore feature on iOS 11.2-11.2.6 devices and improves the reliability of the MP exploit’s clean-up after jailbreaking.

As for the MP exploit’s clean-up improvements, it seems that previous versions of the tool were instigating storage issues for some jailbreakers. Anyone who experienced this issue is advised to run unc0ver RC7, as it should fix the problem.

If you’re not already using the unc0ver jailbreak for iOS 11.0-11.4 beta 3, then you can grab it from Pwn20wnd’s official GitHub page. The jailbreak is open source, which means anyone can look at the source code and learn more about how it works.

We also have an in-depth tutorial showing you how to jailbreak with unc0ver if you haven’t already done so.

Have you used unc0ver RC7 yet? Let us know in the comments section below.