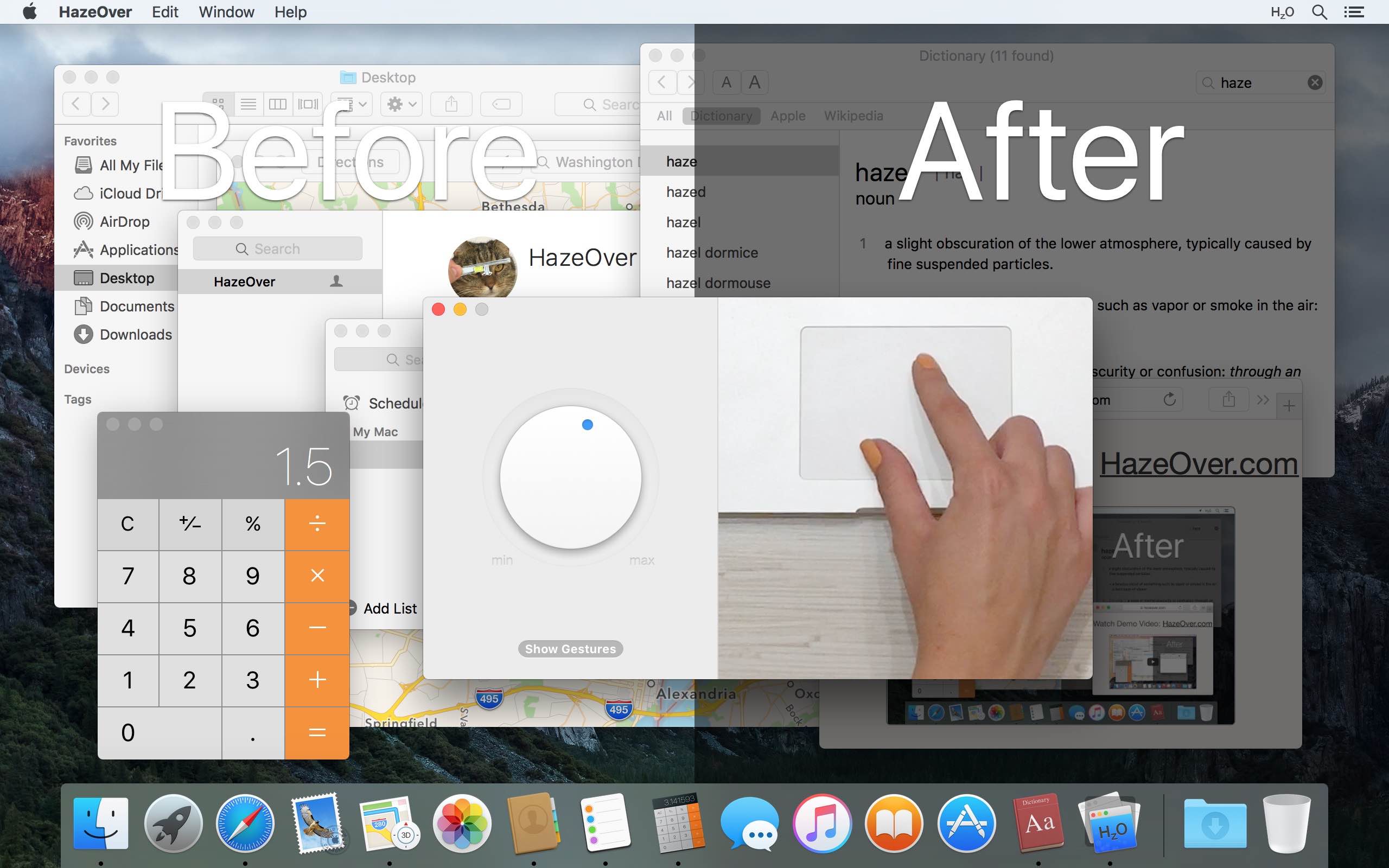 A darkened environment is perfect for working on your Mac at night, without distractions from the background apps. Dark Mode is a system-wide implementation of an appearance that many apps already adopt, but what about apps that lack any dark styling? That’s where an app called HazeOver by Pskov, Russia-based developer Maxim Ananov comes to light.

The problem with Dark Mode

Dark Mode in your favorite apps is an optional feature.

Developers can choose to opt-out of the Dark Mode altogether. Adopting the dark appearance by a third-party app in a thoughtful manner isn’t easy because some elements, such as text documents, websites or content intended for print, need to stay bright at all times.

The drawback of Dark Mode is that any bright elements become critical. Any single bright spot on the screen, such as a white app window, will glare at you from the background and break the whole distraction-free experience that Dark Mode was designed to make possible. 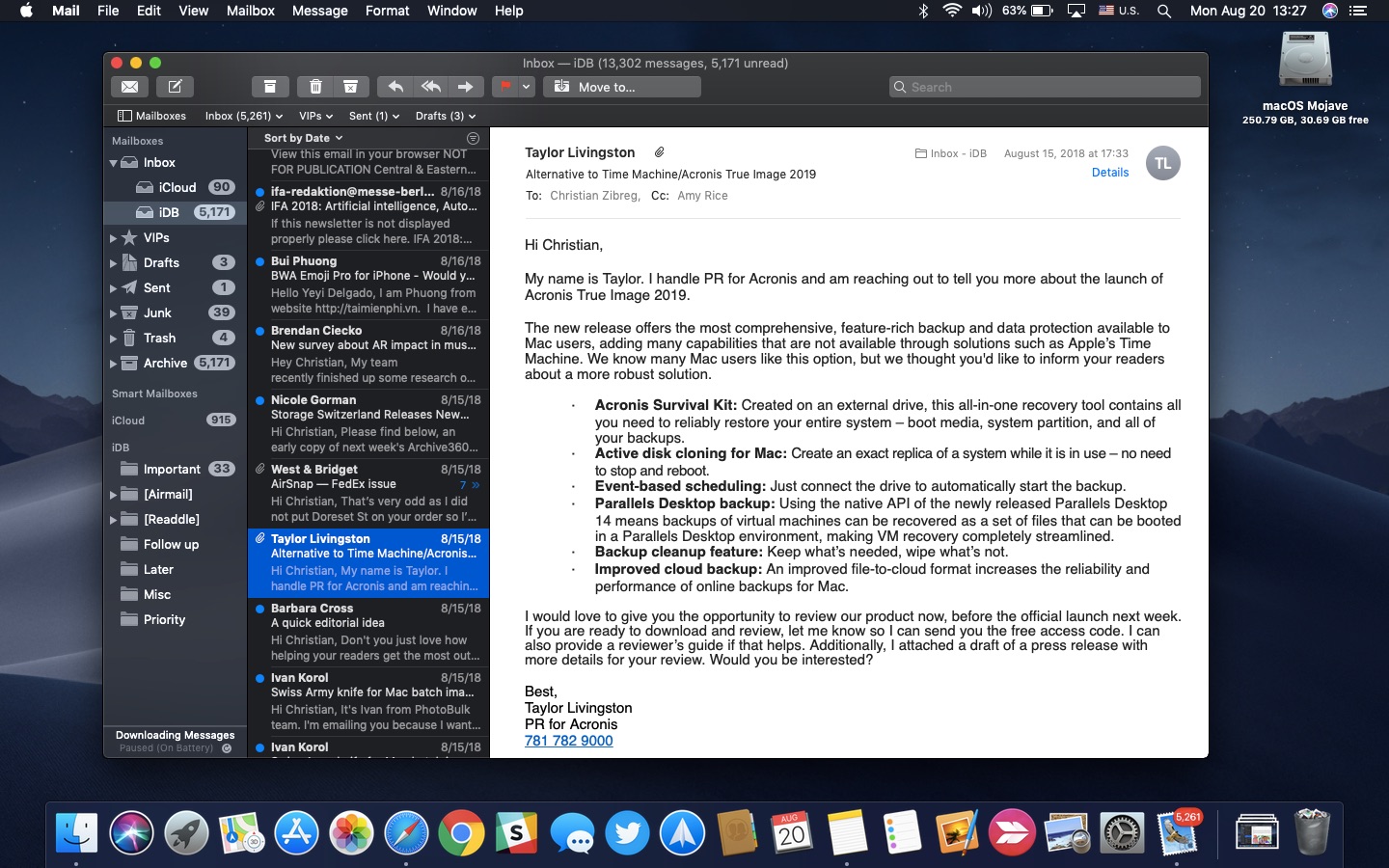 And because there’s no official API that would let a website adapt to the dark appearance, web content becomes a major source of frustration when using Dark Mode.

That’s where HazeOver comes into the spotlight.

HazeOver is a macOS distraction dimmer that won’t make the problem go away completely, but will certainly make putting up with those visual inconsistencies more bearable. We’re currently in a weird place where we multitask between 100% Dark Mode apps, apps which support Dark Mode in a half-baked manner and the that haven’t implemented Dark Mode support at all.

HazeOver helps alleviate these issue by automatically covering up any background windows. The app also kicks in action when you switch windows. 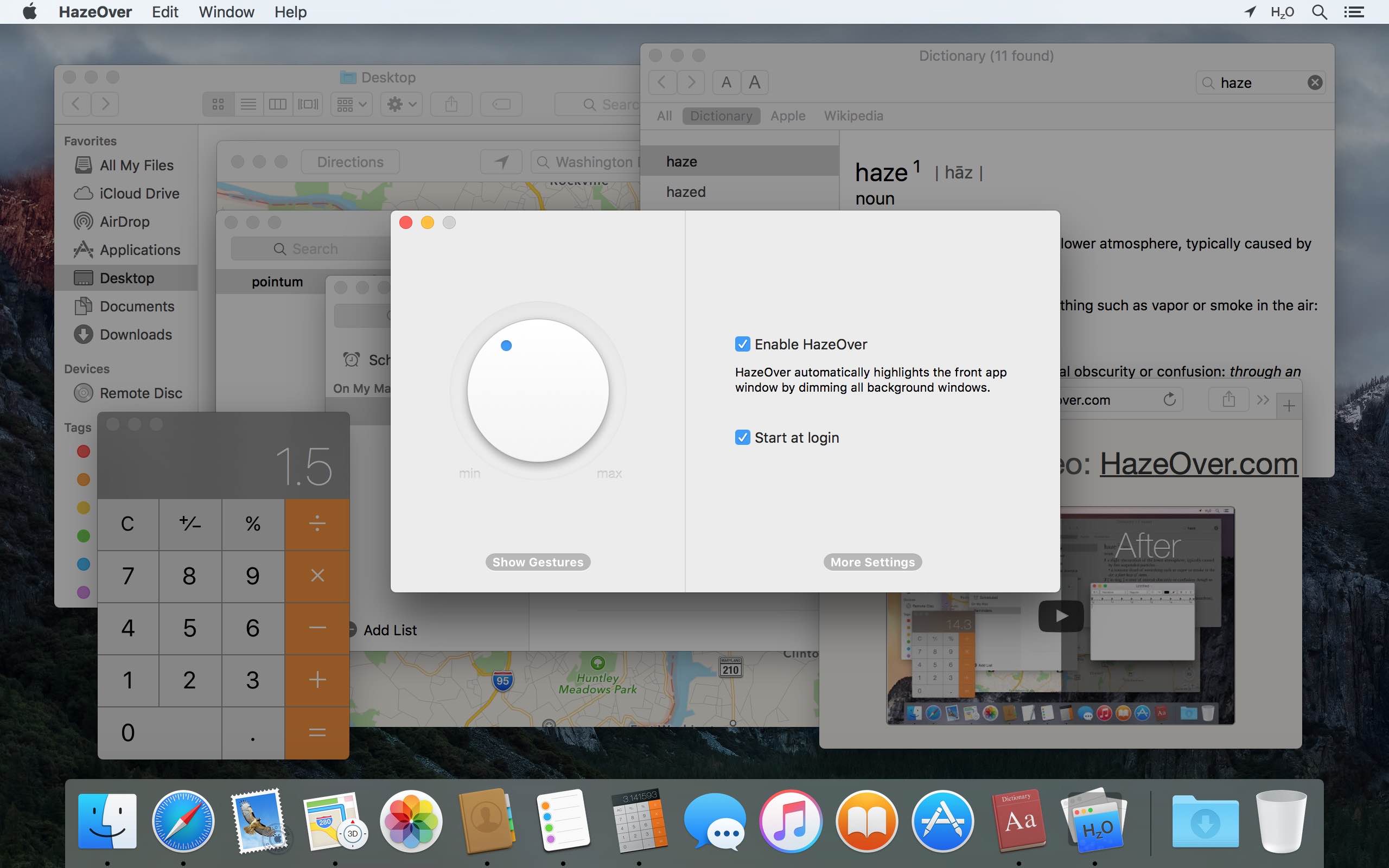 The first 10 seconds of the following video illustrate my point.

If you’re dragging stuff between apps, hold the “fn” key on the keystroke and HazeOver will gracefully fade out. While the software won’t completely eliminate the downsides to Mojave’s darker styling, it will definitely power up the new Dark Mode a few notches and help reduce visual distractions overall. Bringing up the settings interface reveals a handy dial that you can interact with by turning two fingers clockwise or counterclockwise on the trackpad. 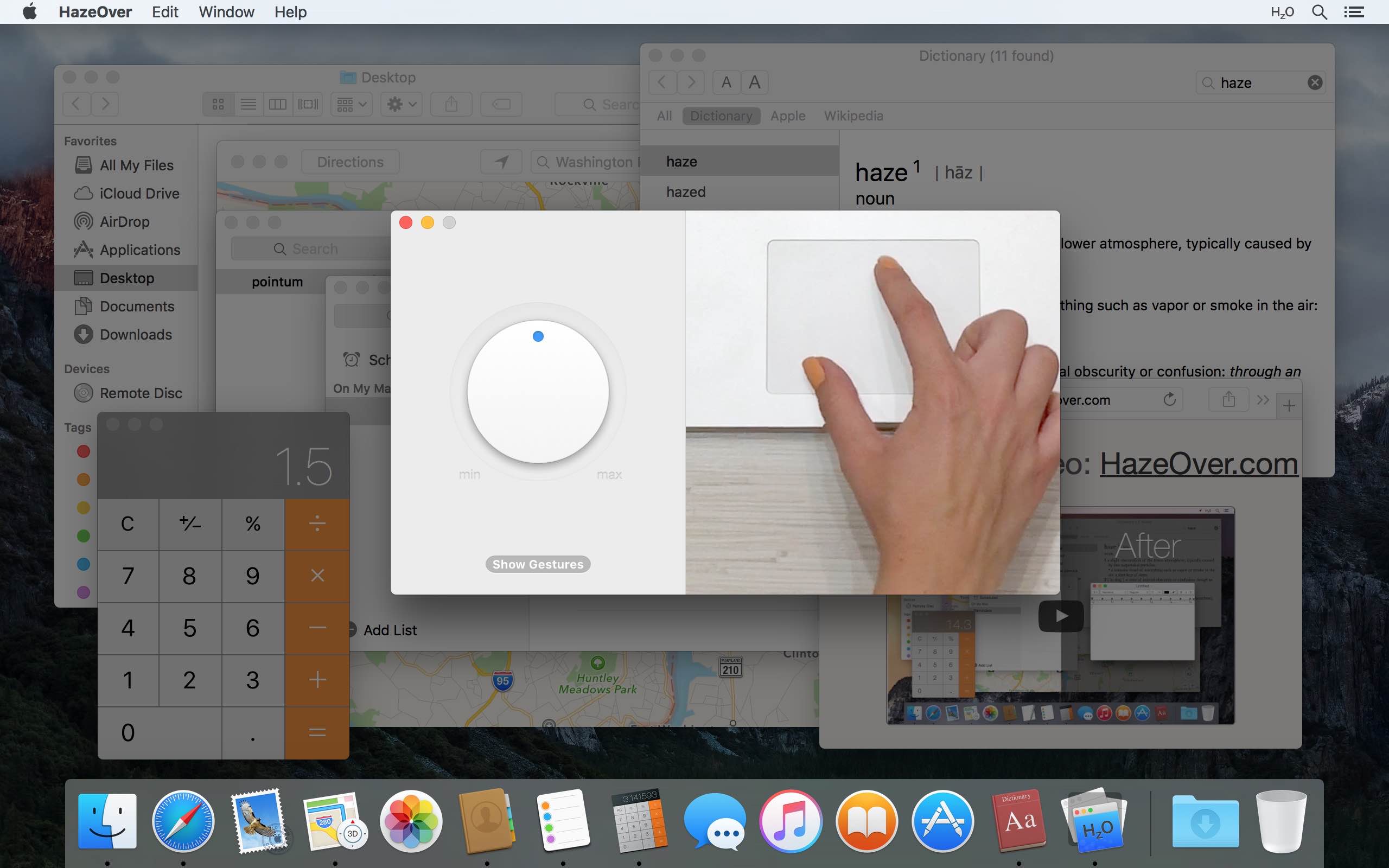 This will increase or decrease the fade-out effect.

Sitting in your Mac’s menu bar, the app can be toggled anytime you want by pressing the keyboard shortcut Option (⌥)-Shift (⇧)-Command (⌘)-H. You can customize the shortcut to your liking, choose whether to run the app at startup and more in HazeOver’s preferences. 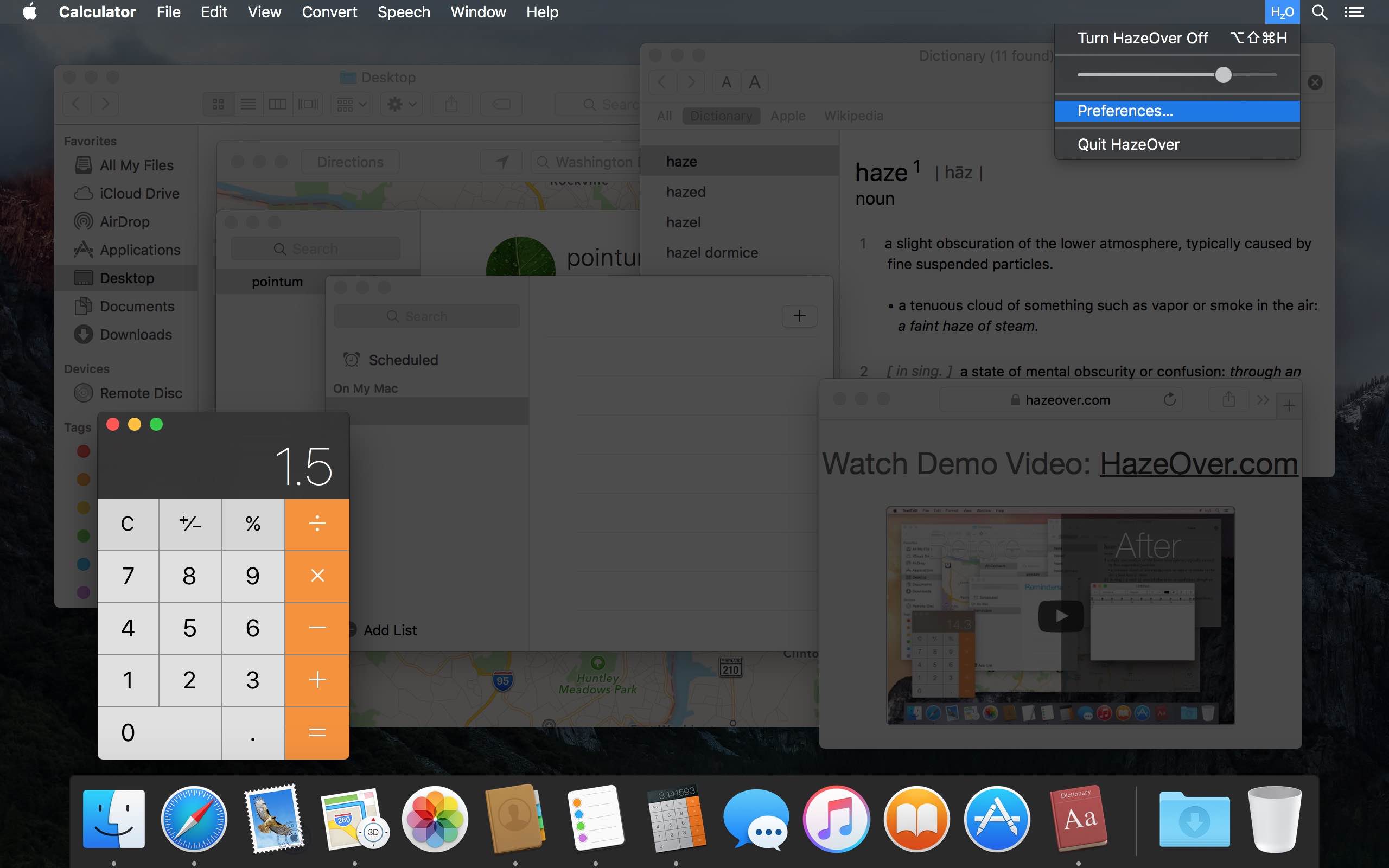 HazeOver is also smart enough to figure out when you’re using the desktop, fullscreen apps or running apps in the side-by-side Split View multitasking mode. Other options at your disposal include choosing if HazeOver highlights all front windows of the currently active app or just a single window, whether to highlight windows on the active display only or everywhere (useful for multi-monitor desktop setups), set the speed of the fade animation and more. 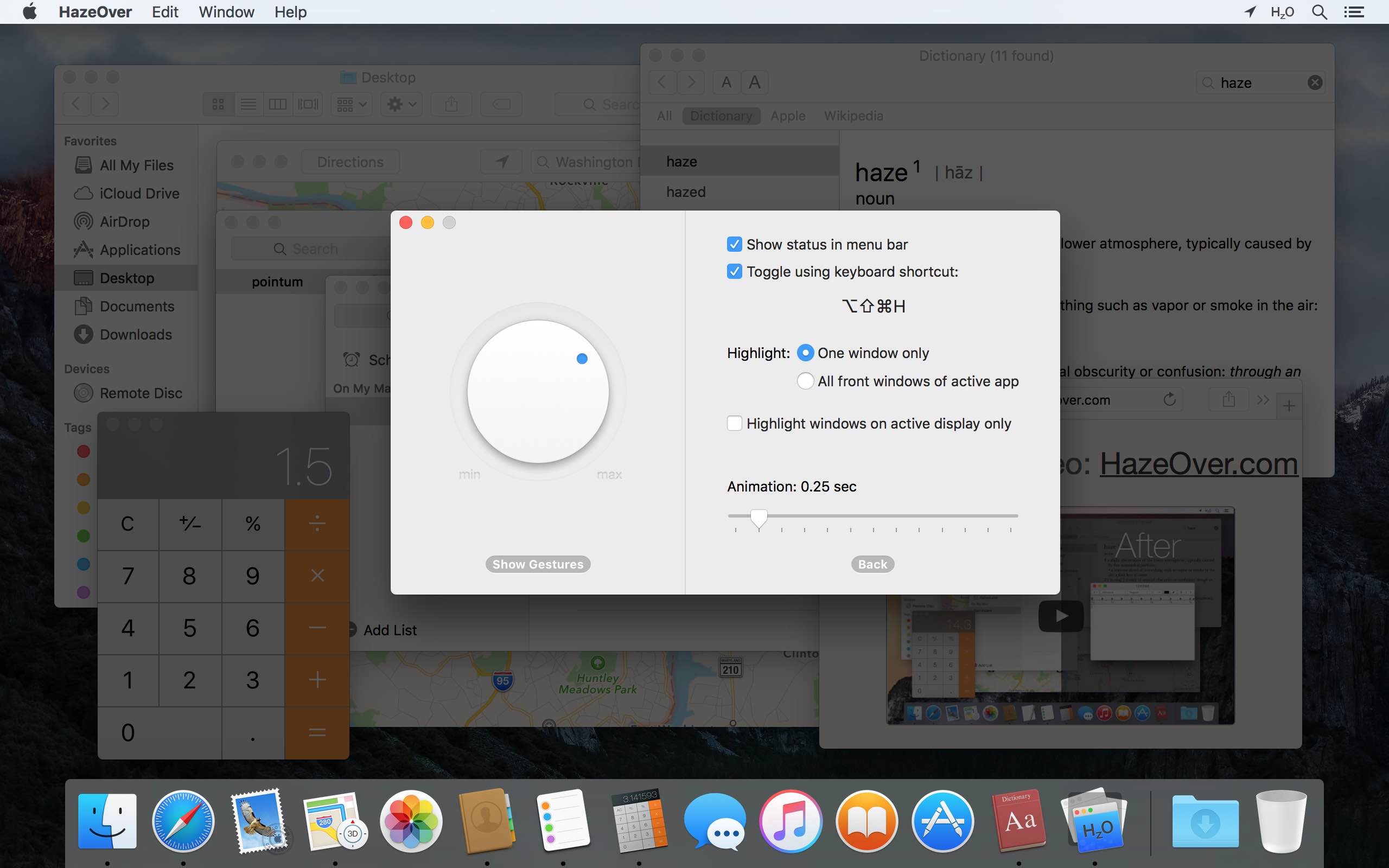 For more information, check out the official website at HazeOver.com.

Beginning with Mojave, developers are advised to follow Apple’s guidelines for implementing dark interfaces in an officially sanctioned way that integrates with Mojave’s own Dark Mode.

TUTORIAL: How to use Dark Mode on macOS Mojave

As we mentioned earlier, many of the more or less popular apps out there currently ship without a darker interface. Plus, some of the apps that have darker styling implement it in their own way, meaning it won’t trigger automatically when the user switches on Mojave’ Dark Mode. 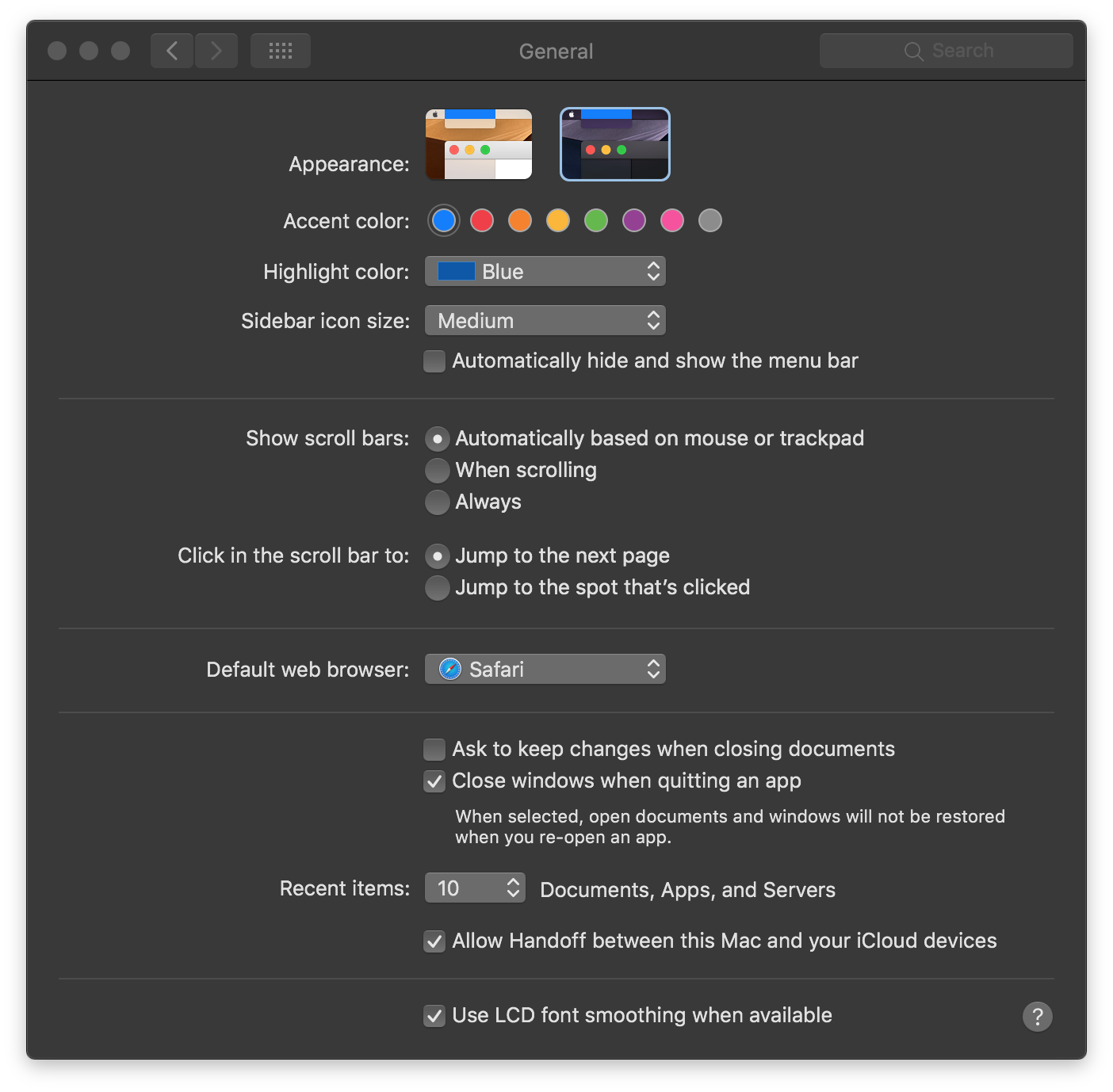 Toggle Dark Mode on or off in System Preferences → General

On top of that, you have Dark Mode apps that use a light background for printed content, like Apple’s own TextEdit app or Mail. And while Mail has its own setting that lets you select between a lighter or darker background for text-only emails, TextEdit lacks such an option.

TUTORIAL: How to choose between Light and Dark mode for Mail composer

Reducing the overall brightness of macOS’s user interface is what the new Dark Mode on Mojave is all about. And with apps like HazeOver, Dark Mode is made even better without sacrificing legibility or color accuracy of the front window.

Be sure to read our original review of HazeOver when it came out back in 2015 .

HazeOver is available on Mac App Store for $4.99.

A trial version is available at the official website. HazeOver is also available as part of MacPaw’s Setup subscription service for Mac apps.