You may have noticed that your iPhone, iPad or iPod touch attempts to auto-join known wireless networks. That said, have you ever wondered precisely how Apple’s mobile operating system determines which Wi-Fi network it should attempt to join automatically?

Follow along to learn about the inner workings of iOS when it comes to Wi-Fi.

macOS attempts to auto-join the Wi-Fi network your computer has most recently connected to. iOS handles Wi-Fi connections differently because you predominately use your iPhone on the go and in places where a bunch of nearby Wi-Fi networks are constantly vying for its attention.

Knowing how iOS determines the Wi-Fi network your iPhone or iPad should auto-join can go a long way toward optimizing your wireless performance: you can prioritize your favorite networks over those you maybe joined once in the past, like a Wi-Fi in a random coffee shop.

How iOS decides which Wi-Fi to auto-join

Read on to learn why you should care and what all of the above means in terms of daily use.

Say your home Wi-Fi is the most preferred network on your iPad. Let’s pretend you’ve used the Personal Hotspot feature recently to share your iPhone’s cellular connection with the tablet over Wi-Fi. Also, imagine you take advantage of a VPN service occasionally on your Apple tablet to bypass regional restrictions for video-streaming apps.

If you’re outside your home Wi-Fi’s reception and not using a VPN service, your iPad will attempt to connect to the Internet via Personal Hotspot on the phone. But as soon as you arrive home, the tablet auto-connects to your personal Wi-Fi. Maybe later that day you went to the movies so you pull that iPad of yours out of the backpack to check out reviews.

A Personal Hotspot is prioritized over any public network

TUTORIAL: How to fully disable Wi-Fi and Bluetooth on iPhone for all networks and devices

iOS saves credentials for public networks, but captive networks (aka subscription networks or Wi-Fi hotspots) are an exception because they block access behind a signup webpage.

We said that iOS’s algorithm starts with the most preferred wireless network, followed by your saved private networks, then any available public ones.

To improve accuracy and reliability, known networks—that is, any saved networks you connected to in the past—are “scored” based on your actions.

The scoring system provides iOS with necessary intelligence in terms of wireless networking which permits it to more accurately prioritize any Wi-Fi networks it should join automatically.

We’ve already established that the algorithm assigns higher scores to your most preferred networks. With that in mind, the inevitable question arises: what exactly happens if the device finds multiple wireless networks after evaluating the above criteria?

In that case, iOS prioritizes Wi-Fi networks based on their security level, as follows.

But what about multiple networks of identical category and security level?

I thought you’d never ask… In that case, iOS picks the Wi-Fi network identified as having the strongest received signal strength indication (RSSI), according to Apple’s support document.

If you’d like to prevent your iPhone, iPad or iPod touch from automatically joining your previously saved Wi-Fi networks, be sure that the option labeled Auto-Join is turned on when you hit “i” next to the network name in Settings → Wi-Fi. 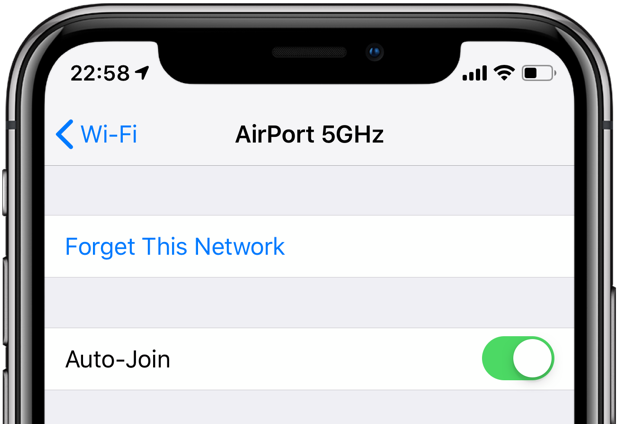 Conversely, leaving the toggle on ensures the device remembers login information and attempts to join that network automatically whenever it’s in range.