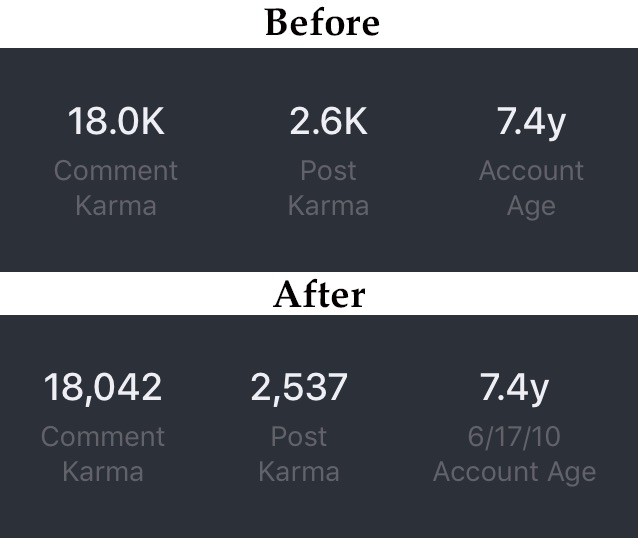 If you’ve been paying attention to the news lately, then you’ve probably heard all about the shiny new Apollo Reddit client for the iOS platform. Designed with love by a former Apple employee, it’s almost everything an iOS user could ask for in a Reddit app.

While Apollo is indubitably stunning at first glance, jailbreak developers are already finding ways to enhance the app. Drago, by iOS developer rob311, is the latest of this bloodline of jailbreak tweaks with its sights set on making Apollo even better.

Shown above, the tweak basically makes your Reddit karma scores more informative in the Apollo app, and this is one improvement that I wish the app developer included out of the box.

If you have well over 1,000 karma in any category on Reddit, then Apollo not only displays “1K” (or however many K relative to the number of thousands of karma you have), but it also rounds the figure. For example, if you have 2,587 karma, Apollo displays “2.6K,” and this seems a bit misleading (at least for my tastes).

With Drago, you’ll see your Reddit account’s karma stats as accurately as possible, directly inside of the Apollo app and right down to the single digits. Nit-picking? Maybe; but essential? I think so.

Given the energy that Apollo developer Christian Selig has put into the app thus far, I don’t see why he couldn’t implement such an improvement, even if it were merely a user-configurable option. After all, Drago’s conception proves that I’m not alone in my passion for more accurate stats.

For the time being, we’ll just have to settle for the jailbreak tweak patch, until an update officially launches. If you want to download Drago on your jailbroken device, then it’s available for free from Cydia’s BigBoss repository. Keep in mind that it requires the Apollo Reddit client for iOS, which can be downloaded for free from the App Store.

Interested in modifying the Apollo app even further? A jailbreak tweak called ApolloJustCompatible hides iOS 11-only features from the Apollo app on jailbroken iOS 10 devices.

Would you prefer seeing your exact Reddit karma numbers instead of the sugar-coated numeric abbreviations you see now? Share below!