The ability to store and play podcasts on Apple Watch is one of many features advocated for regarding future watchOS updates, but so far it has fallen on deaf ears at Apple. With the cries for podcasts on Watch slowly reaching fever pitch, developers have taken matters into their own hands and released a fully functional podcast app that enables the transfer of your favorite subscriptions from iPhone to Apple Watch.

The app goes by the name WatchPlayer and (while moody at times) gives a solid account of itself, effectively beating Apple to the punch in the podcast race. Find out below how the data transfer is realized, where it trumps Apple’s stock apps and what areas of WatchPlayer could do with some attention.

WatchPlayer does not tap into your Podcasts app to replicate your file structure or current subscriptions. Instead, you start off with a clean slate and options to either paste your podcasts’ Feed URL or search the iTunes catalogue. In view of some of the quirks of the app, which will be dealt with later, that’s a good thing. After tracking down the podcast you are after (which has worked without fail for me) WatchPlayer is going to download the audio file and store it inside the app. Transmission to your Apple Watch gets underway when you hit the designated icon on iPhone and open the app on your watch. 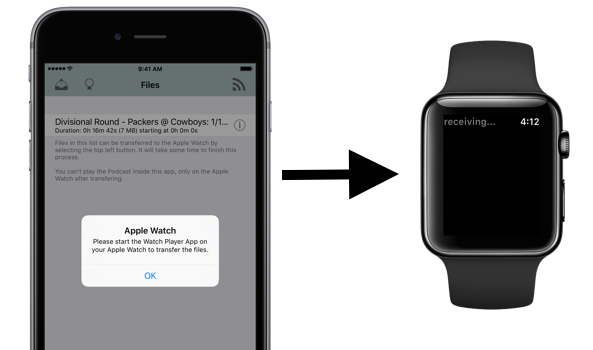 This is where we will have to skim over the shortcomings quickly. The transmission can cut out at times, it can stall and completely choke with longer podcasts. Mind you, transferring music through Apple’s Watch app hasn’t been a walk in the park either until the latest generation of watches arrived, but what elevates Apple’s syncing is the simple existence of a progress indicator.

WatchPlayer does not give you any sign as to how much data has been sent over to your watch successfully, which is frustrating at best and infuriating at worst. Consequently, as soon as the data transfer clocks more than five minutes, chances are you will start wondering if the process has hit a dead-end.

For there is virtually nothing to suggest the success or speed of the data transfer, you are often better off avoiding the transmission of multiple podcasts at once. Send and listen to one at a time, and you will curtail frustration. 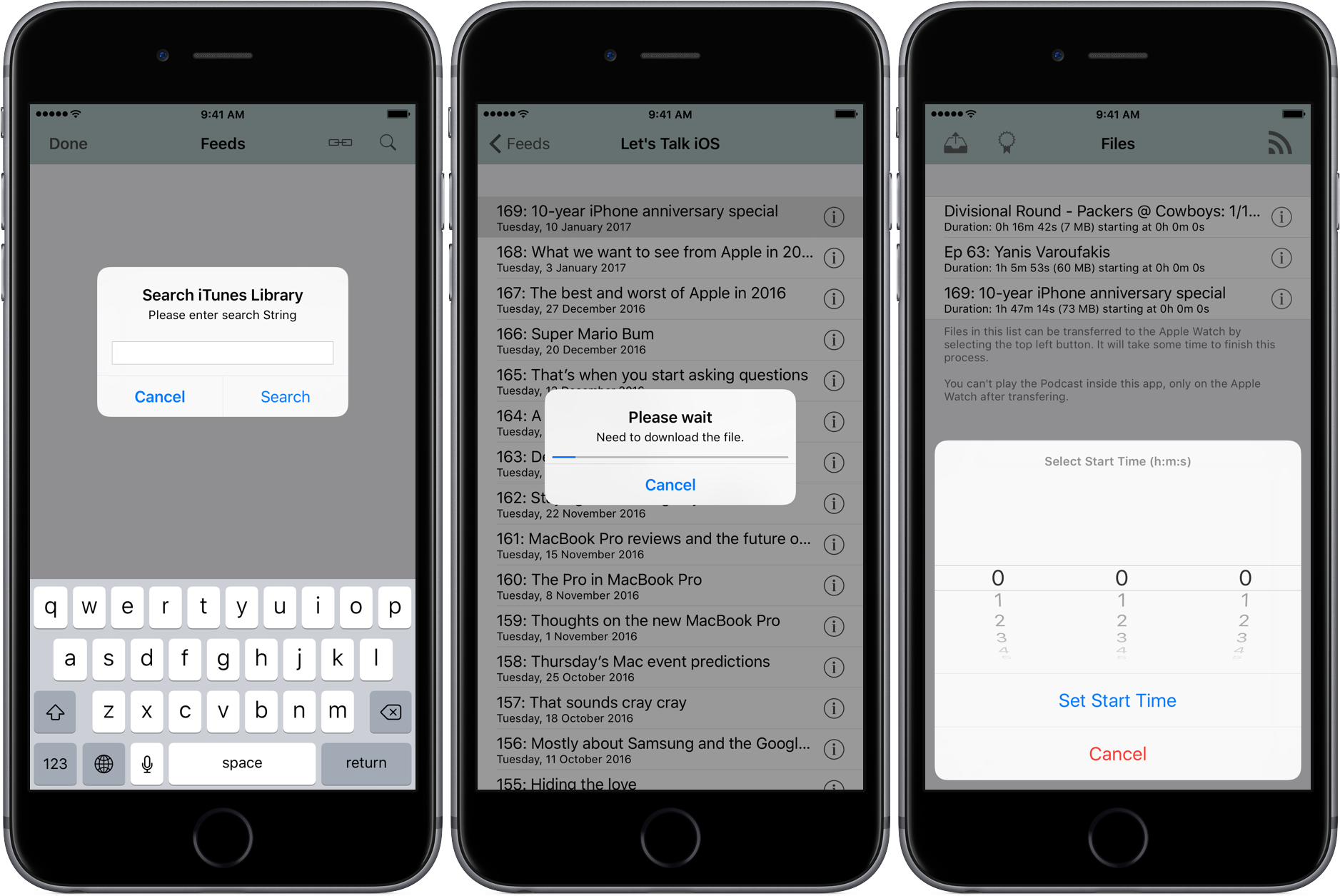 Notwithstanding that, WatchPlayer could not possibly do enough wrong for me to advise against trying it. If you are willing to give it a bit of rope in terms of bugs, it excels in an area Apple thus far has not even broached.

As far as the Apple Watch app goes, the interface is self explanatory and feels snappy on Series 1 and Series 2. It opens and plays quickly and implements Force Touch to delete all podcasts in one go.

What’s the feature Apple will not be offering with their presumed take on podcasts, you wonder? Perhaps the coolest trait of WatchPlayer is that if you don’t have any wireless earbuds handy, the watch will utilize its external speakers to blare out the podcast. Apple seems adverse to that notion, incomprehensibly considering the sturdy sound quality WatchPlayer is capable of producing. 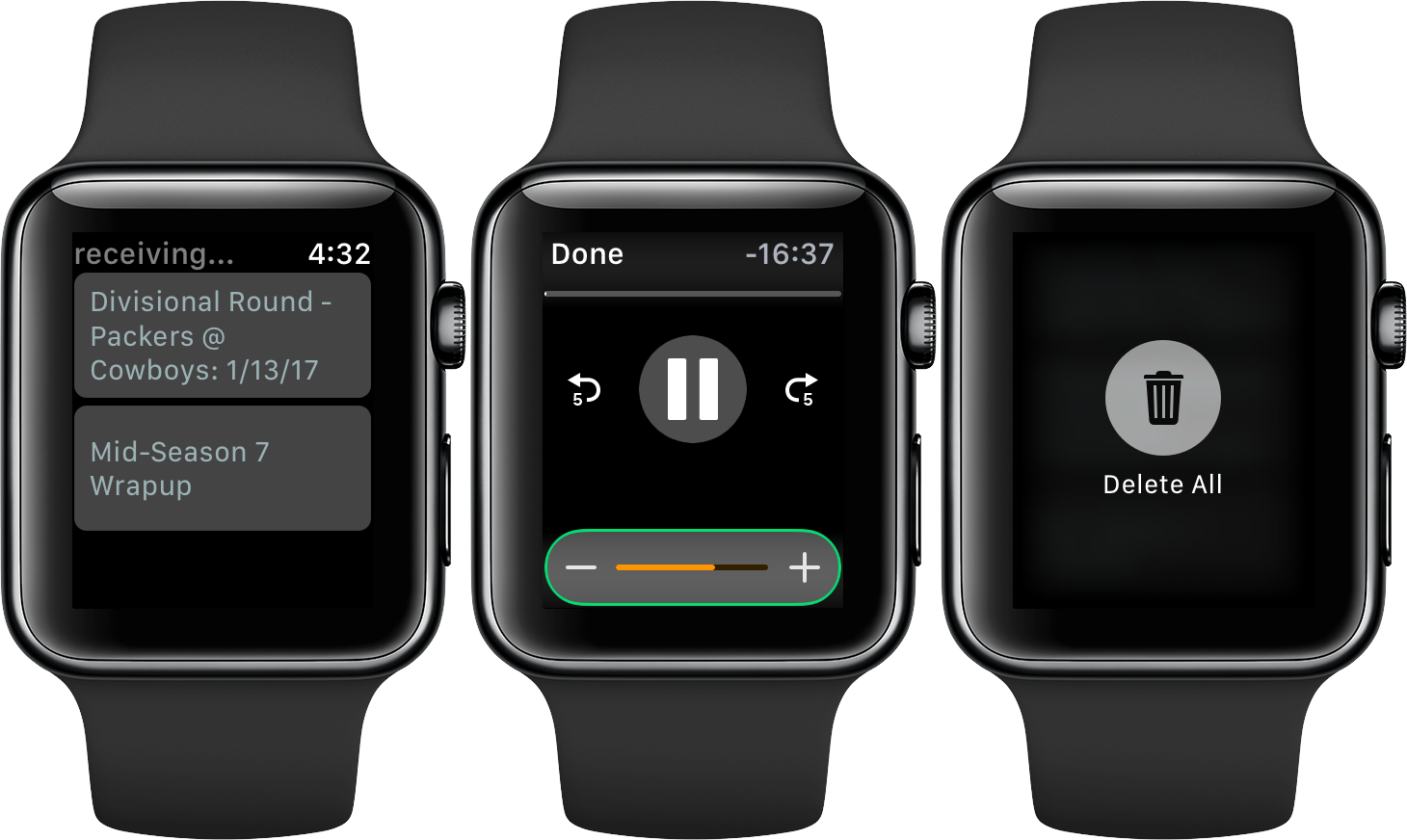 Notable features and bugs aside, WatchPlayer comes with all the other bells and whistles you would expect.

It is undeniable that this application requires cosmetic and functional improvements, but despite its current flaws the overall package is just too appealing for podcast fans to give it a miss. If you’re into listening to your favorite shows on long walks or workouts, get it while it’s hot (and free).

WatchPlayer requires iOS 10 and is compatible with iPhone, iPad and iPod touch. Find it for free in the App Store.

Also read: A workaround to sync podcasts with Apple Watch